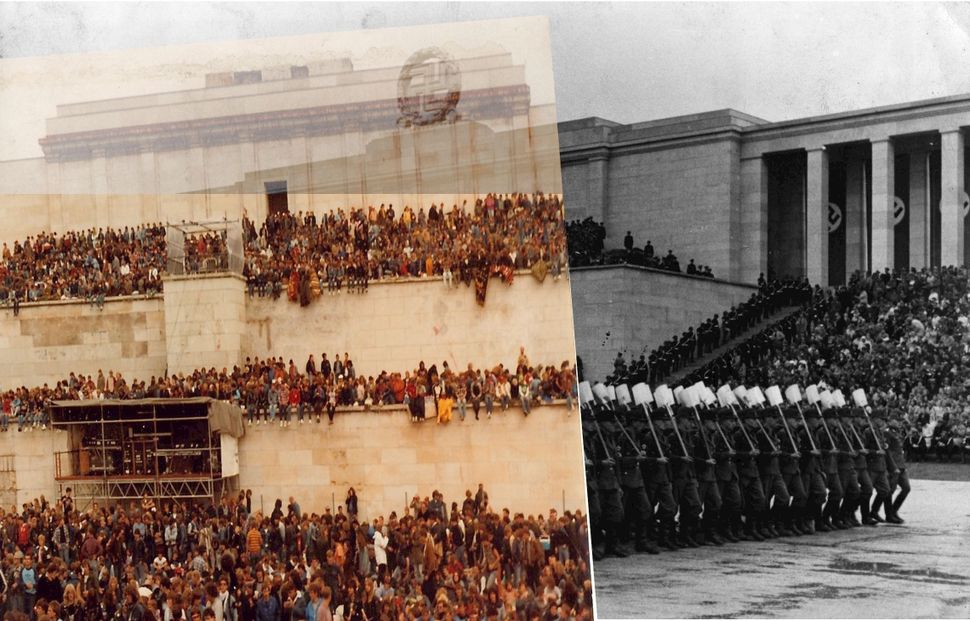 As an original member of the band Twisted Sister, I have performed in almost 9,000 shows around the world. But the story of the craziest, historic and most emotionally affecting show I’ve ever played happened on September 30th, 1983 in Nuremberg, Germany — in Zeppelin field, the site of Hitler’s Nuremberg rallies.

We were a bottom of the bill, last minute addition (due to the unexpected success of our first major label album “You Can’t Stop Rock n Roll”) as part of a late summer European traveling heavy metal concert tour package.

We were the very last band on the bill, which means that we were the first on stage every performance (this traveling circus played about 8 shows in several cities on the “German leg” of the tour), which meant that we performed in the daylight at about 4:00 p.m. in the afternoon for every show.

Most of the shows were indoors in big arenas, but the last show of the tour was to be held outside in Nuremberg, Germany.

When one plays on these kinds of tours, you tend to not really look at the dates on the itinerary. You just concentrate on the day of show — and maybe the next day. You travel by bus and you just try to get enough sleep and deal with the daily grind and boredom of the tour schedule.

While Germany had become a major market for heavy metal music due in large part to the amount of U.S. servicemen stationed in the numerous NATO bases in the country, As a Jew, I still never felt all that comfortable. Not having lost any family in the Holocaust, and not being religious, it’s not like I had a specific reason to feel particularly uncomfortable. But as a student of history, I spent a lot of my time walking around and talking to the young Germans I met to try to understand what kind of atmosphere led to this kind of monstrous activity. It was scary to find, in 1983, that almost none of my peers (I was 31 at the time) could say what, exactly, created Hitler. It was really shocking.

Having traveled and toured in Germany over the past 20 years, I’m happy to report that this condition has completely reversed itself. Not only in the schools, but on TV, there seems to be an almost daily diet of movies and documentaries dealing with the rise of the Nazis and Germany’s obsessive guilt over what happened to the Jews. It now has almost gotten to the point of making many young people react by saying, “OK, we get it— but it wasn’t us;” “Stop already, we hear you.” In a way, it is not unlike the desire of some young people living in the deep South to not want to be associated with the unsavory chapter in American history where slave ownership was common.

But let’s get back to the show that day.

It was a beautiful afternoon, and our tour bus was rolling down the autobahn in Nuremberg when we passed a humongous structure facing the avenue. Our driver was a 20-something German who told us that we had just arrived at the concert site.

As the bus rolled through the big iron gates, we drove into an immense field. In fact, it was the biggest field I had ever seen.

When we got out of the bus, I turned my head and, like the scene in the movie Jurassic park when the Laura Dern character sees the T-Rex in front of her for the first time, I could not believe what I was seeing.

We had arrived onto Zeppelin Field, the site of the biggest ever Nazi rallies. And there, right in front of me, was the building that Hitler, Goebbels, Speer an Goring stood on and presided over when addressing about 500,000 uniformed German soldiers in all those newsreels.

The building that seemed to symbolize, at least to me, all of the psychological manifestations of the projected power image of the Third Reich. The sheer size the the building and the field seemed to say: “You are all small and inconsequential, you are to obey the powers that stand before you!”

All one has to do is go online and look at the Nuremberg rally photos to understand the image. That building, with the Swastika set on top.

I couldn’t believe that the building was still standing — let alone being used as an observation deck for the concert!

The promoter, Ozzy Hoppe, walked over to me and said “Jay Jay, You Jew?”

I was a little taken aback, as I never really associated myself as a Jew; growing up and still living on the Upper West Side of Manhattan, I just assumed everybody was.

He said, “You looked a little pale and sick; all the Jews who have played here seem to have the same reaction.”

I asked him how long the field had been open to concerts. He told me that the U.S. government, who took over the grounds after the war and decided to let them stand as a permanent reminder of Hitler’s madness, opened the field to entertainers the year before — and that Bob Dylan had been the first artist to perform there. He said that Dylan was also a bit shaken at the site.

The reason one with any history at all gets particularly unnerved is that the stage on which you perform is constructed about 100 yards (a football field length) in front of the building. You are actually playing to a field that holds about 40,000 people that are standing between you and the building. People are allowed to stand on all the levels of the building as well.

We were, in fact, about to perform to about 70,000 metal fans, almost all of whom were in the army and about 23 years old on average, pretty drunk and out for a full day and night of heavy metal and with no particular historical reference at all.

To them, this was just a really cool field and location for a concert as far as they all were concerned.

So we go up on stage and start to play.

We had a 45-minute set. All I could do was stare at the building in disbelief of where we were performing and walk up to my bass player Mark “The Animal” Mendoza (real name Mark Glickman) and make a quick reference to the irony of the fact that just 40 years prior, Hitler stood here to lead the Nazis to our collective destruction — and here we are, playing in Twisted Fu*king Sister!

As our show neared its end, we were closing with our version of the Rolling Stones song “It’s Only Rock n Roll, But I like It!” As a final part of the song, Dee screams at the audience to raise their fists and scream “I Like It.”

And then, the image hit me.

70,000 mostly US soldiers, raising their right arms in the air, together in unison, shouting “I lIke It,” in front of that building, over and over again.

The juxtaposition of the location, the soldiers, the right arms in the air and the collective screams was just too frightening. My blood went cold and I went numb.

As we got offstage and I began to walk to the dressing room, I ran into Lemmy from Motorhead, who, surprisingly was a WWll history buff.

I told him about what I had seen and felt, how surreal the whole thing was. He told me to stand on the side of the stage during their set.

After playing several songs, Lemmy exhorted the very large and vocal crowd to make some noise.

They did, but not to his satisfaction.

He then turned his head in my direction and said, with a twinkle in his eye, these words in the mic: