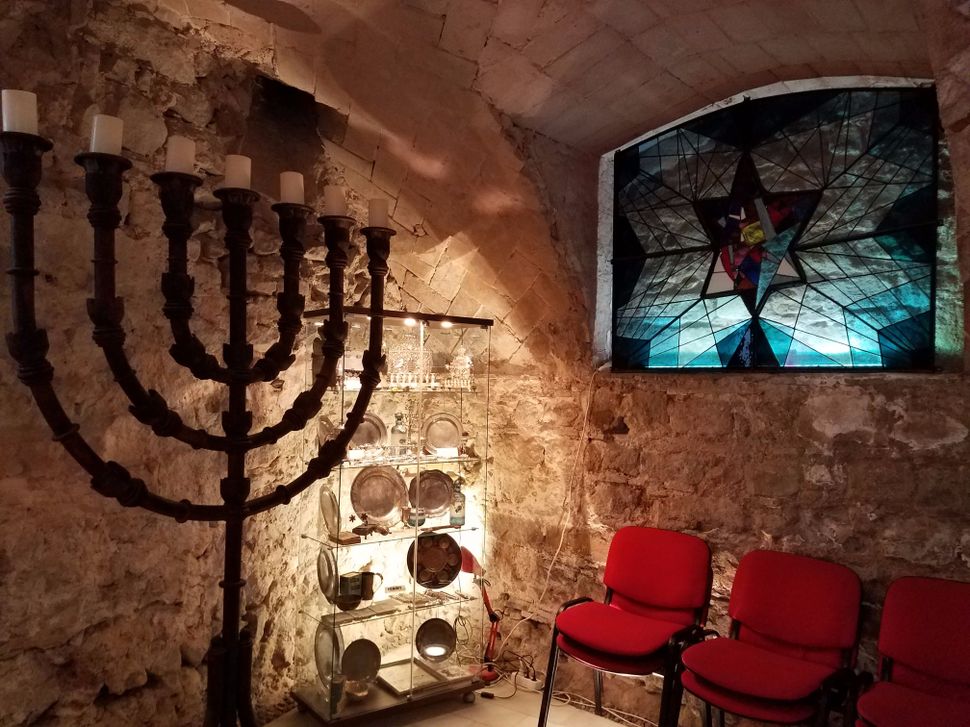 The Ancient Synagogue of Barcelona, also called Sinagoga Major de Barcelona in the region’s native Catalan, is on Carrer Marlet, a narrow stone road in the city’s old Jewish quarter, the “Call” (a Catalan word from the Latin callis that means “narrow streets”).

Although the site is small, easily accessible and lovingly and openly preserved, its history is affectingly complex. I wandered in as a stop along my day’s mapped-out journeying, and left with a profound sense of both sadness and appreciation for the very troubled history of my people.

One of the world’s oldest synagogues, if not the oldest in Europe, the two-room synagogue dates to the third or fourth century, and was in use until the end of the 14th.

The entryway includes the remnants of a kotel wall, as well as a yartzeit (rememberance) wall, informative signage and souvenirs that benefit the restoration. Admission is 3.5 euros (about $4), and one wishes they could donate 1000 times that amount.

Tours are conducted in the inner sanctuary, which includes a lovely Ark and an ancient Torah, as well as menorahs and a stained glass Judaic star in the rear, outlined by a 12-pointed star that signifies each of the Twelve Tribes. Our guide was from the Associació Call de Barcelona which was founded in 1997 to support and manage the restoration of the synagogue. 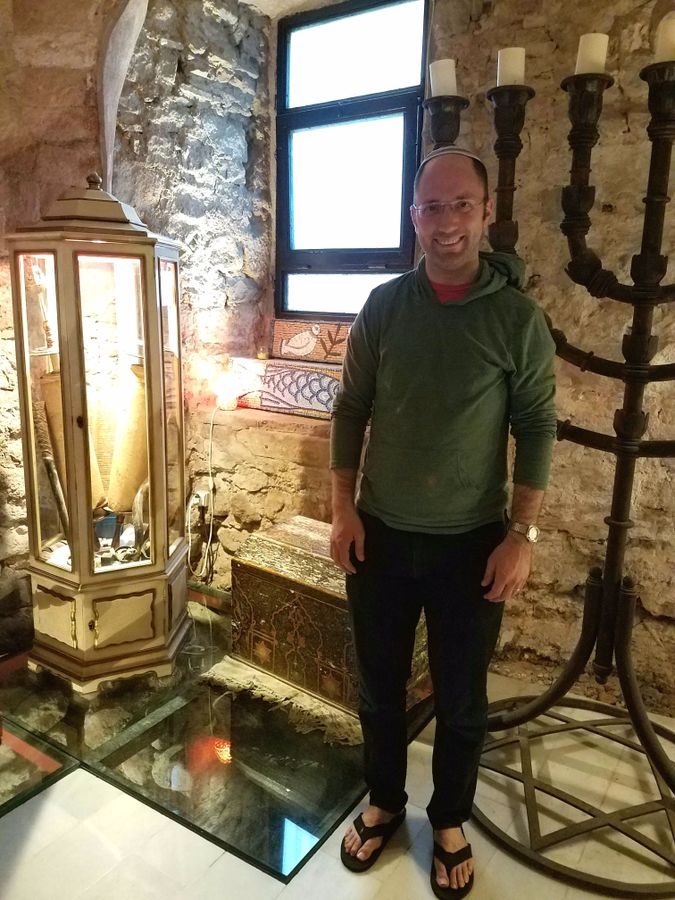 Our guide told us that private ceremonies such as bar mitzvahs, bat mitzvahs and weddings are held at the synagogue, but it is not part of the community.

I learned from her that there was a women’s section behind our pews that is now a restaurant. “It has not been purchased yet,” she said.

She explained that the building is one of five synagogues in ancient Barcelona, and that originally, Jews were not allowed to build them any bigger than the largest church in town. According to the Associació’s site, the synagogue was significantly expanded during the 13th century.

The site also notes that archaeological investigations have dated the building’s original structure to the third or fourth century, and that in 1400, a Barcelonian named Jaime Colon inherited the tax registers of houses in the Call from his father, Guillem, who had purchased them in 1393. Colon then created a detailed Book of Registers, which, our guide told us, included information on the old Jewish quarter.

In 1987, Catalan historian Jaume Riera y Sans published an article, “Catalonia and the Jews,” in which he reconstructed the tax collector’s 1400 route through the Jewish Quarter, and found that it ended in front of the synagouge.

Consequently, the website chronicles that Associació founder Miguel Iaffa proved that the building’s wall faced Jerusalem, and that in compliance with Jewish standards, two windows “allowed for the passage of light originating in the Holy City.” When it was put up for sale in 1995, he purchased it.

According to spokesperson Carmen Kobiakova, Iaffa has died, but his sons are continuing the project that Miguel started. “Miguel Iaffa was born in a small village called Marça in Catalonia during the Spanish Civil War and raised in Argentina, so he was a Catalan-Argentinian Jew,” Kobiakova wrote in an email.

Kobiakova wrote that they are confident that the ancient synagogue was on that site. “There also are Roman numbers on the cornerstone of the wall, which tells us that it dates back to the third or fourth century, back to Roman times,” our guide said.

What is certain, in any case, is that the Jews of Barcelona suffered persecution and tragedy. According to our guide, a significant 15-20 percent of the population was Jewish in the 14th century, and greatly contributed to civic life. The synagogue was in the center of Jewish quarter, which she said was not enclosed like a ghetto. Montjuic, (the “Jewish Mountain”), where many Jewish gravestones were located, still looms above the city.

But regulations were imposed in 1215 that restricted Jewish businesses and increased subservience to Christians, including the wearing of badges.

Then, the Black Plague struck, and 60 percent of the general population died. The Jewish community had fewer victims, due to, as is now suspected, their kosher diet and better hygiene. But the non-Jewish community accused Jews of poisoning the water, and in 1391, the Jewish quarter was burned, and 400 Jews were killed. Many survivors forcibly converted.

“A family that lived here for 10 years after the massacre was accused of hiding Jewish practices,” our guide said, adding that they all fled to France except for a mother-in-law, who was killed. By 1487, no more Jews were living inside the quarter.

And then came the Inquisition.

The building was used for other purposes until it was rediscovered and restored in the 1990s. “We located three of the original five, and this was the only one we could buy back,” our guide told us. In my research, I found that King James I is said to have visited the synagogue in 1263 at the end of the Barcelona Disputation, during which enforced debates were held between Dominican Friar Pablo Christiani, who had converted from Judiasm to Christianity, and Rabbi Nahmanides (Moshe Ben Nachman). Although Nahmanides won praise from city leaders for his defense of Jewish texts, the community was ordered to remove any passages deemed offensive from their Talmuds, or they would be burned.

It wasn’t easy for Barcelonian Jews, and one marvels at their perseverance, indeed their survival. Thankfully, the Associació is seeing that their legacy is maintained with dignity.

“21 years ago, this was a warehouse, and the synagogue was restored at its original ground level,” our guide told us.

According to its site, the Associació is made up of people of different religious backgrounds, as well as local historians, who are committed to recovering the historic memory of the Jews of Catalonia as well as their Jewish and Catalan legacies.

Supporters and members such as Alex Neish, a Protestant from Scotland who donated his pewter Judaica collection, are donors of the religious items that fill the rooms.

Today, Barcelona has the largest Jewish community in Spain, numbering some 3,500 persons and with four active synagogues — two Orthodox (Chabad) and two Reform — as well as a day school, an elderly home and a yearly Jewish film festival.

Rabbi Ari Saks of Congregation Beth Mordecai of Perth Amboy, New Jersey was at the synagogue. “It’s wonderful to visit such a place and hear its story,” he said, “to remind us that the Jews are an eternal people.”