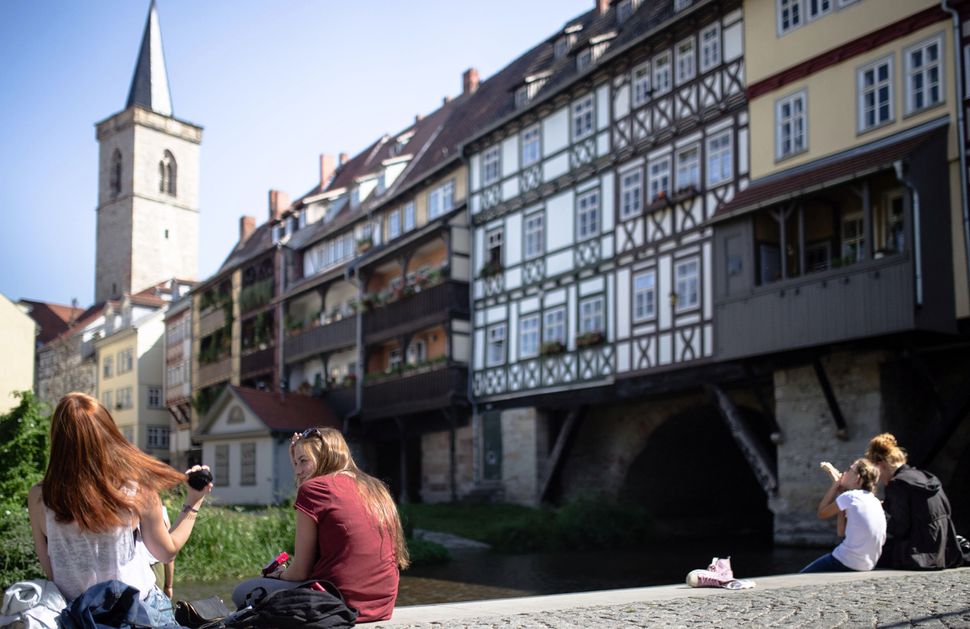 By German National Tourist Board July 6, 2017

Erfurt is a jewel-box of a city. Nestled along the banks of the Gera River in the heart of Germany, Erfurt boasts a beautifully preserved medieval center, replete with the storybook spires of a fortress and cathedrals. The Krämerbrücke, or Merchant’s Bridge, is lined with lovely half-timbered houses — which are still in use as cafés and apartments, much as they were centuries ago. In terms of history, Erfurt has strong associations with Martin Luther, the father of the Reformation, who studied and became a monk at the city’s Augustinian Monastery.

All this, as they say, would be enough. But Erfurt has a rich Jewish history as well. The more recent part of the story begins with a fascinating discovery — or rediscovery. In 1998, archeologists were excavating the cellar of a house on Michaelisstrasse, a charming medieval street in the city center. The archeologists were astonished to find, beneath a basement wall, a proverbial buried treasure — some 28 kilograms, or 60 pounds of gold and silver that lay hidden for 650 years.

The Erfurt Treasure, as it would be known, is comprised of 3000 silver coins, fourteen silver ingots, and some 700 works of goldsmithing, such as belt buckles and brooches. Perhaps the most spectacular piece is a gold ring adorned with a miniature Gothic tower and engraved with the Hebrew letters for mazel tov — meaning “good luck,” or in this case, “congratulations.” Scholars believe that it is a Jewish wedding ring, the tower a representation of the Temple in Jerusalem.

In its former life, Erfurt was located on the Via Regia, a crucial trading route through the Holy Roman Empire. This explains why Erfurt was a wealthy city in the Middle Ages, and why it had a significant Jewish population. Michaelisstrasse, where the treasure was found, is right smack in the middle of Erfurt’s former Jewish quarter. Researchers believe that the treasure likely belonged to one Kalman von Wiehe, a merchant who lived in Erfurt in the mid-14th century. 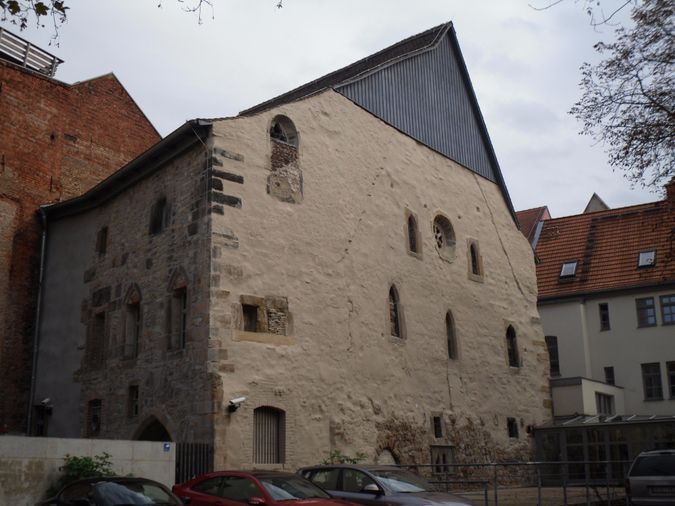 Erfurt’s Old Synagogue, where the treasure is now displayed, has a similar story of re-discovery. The synagogue is old indeed, with parts of the structure dating from the 11th century. But over the centuries, as the local Jewish population declined, the building was used as a storehouse, an armory, and even a dance hall. Few people remembered that it had been a synagogue, so the building escaped destruction in World War II.

The 1990 German reunification brought with it a renewed interest in Germany’s Jewish history, the Old Synagogue included. After painstaking restoration, the building was reopened in 2009 as a beguiling museum. Today, the Old Synagogue is literally one of the most important and best-preserved examples of Jewish architecture in Europe.

With its slim Gothic windows and elegant rosette, the building is a moving reminder of the simplicity of many medieval synagogues. Inside, the exhibitions evoke the variety and richness of Jewish life in Central Europe. The Erfurt Treasure now occupies the Old Synagogue’s lower floor. It’s a surprisingly poignant display of Jewish life, the ingots and coins sharing space with gleaming Kiddush cups. The ground floor focuses on the fascinating construction and architecture of the synagogue itself. The upper floor boasts a display of rare and precious Hebrew manuscripts including Torah scrolls, a medieval prayer book, and the oldest extant copy of the Tosefta in Europe.

The Old Synagogue evokes the lives of medieval Jews in marvelous detail. Visitors are treated to an unforgettable lesson in Jewish life and worship, as well as a deeper understanding of the inextricable links between Jews and Christians in this part of Europe.

It’s important to note that the Old Synagogue is not the only Jewish site in Erfurt. Archaeologists have also excavated a nearby 13th century mikveh, or ritual bathhouse, which can be visited. The Erfurt Synagogue and Jewish Community Center, also known as the New Synagogue, attests to the rebirth of a Jewish presence in the city; kosher meals are available.

The tragic history of Jews in Germany is well known. What’s less well known is that Erfurt is a prime example of how Germany is working to preserve and honor the long history of German Jewry. The Jewish sites of Erfurt, along with its many streets of uncommon charm and beauty, make this jewel box of a city well worth a visit.

For more information visit Germany For The Jewish Traveler.