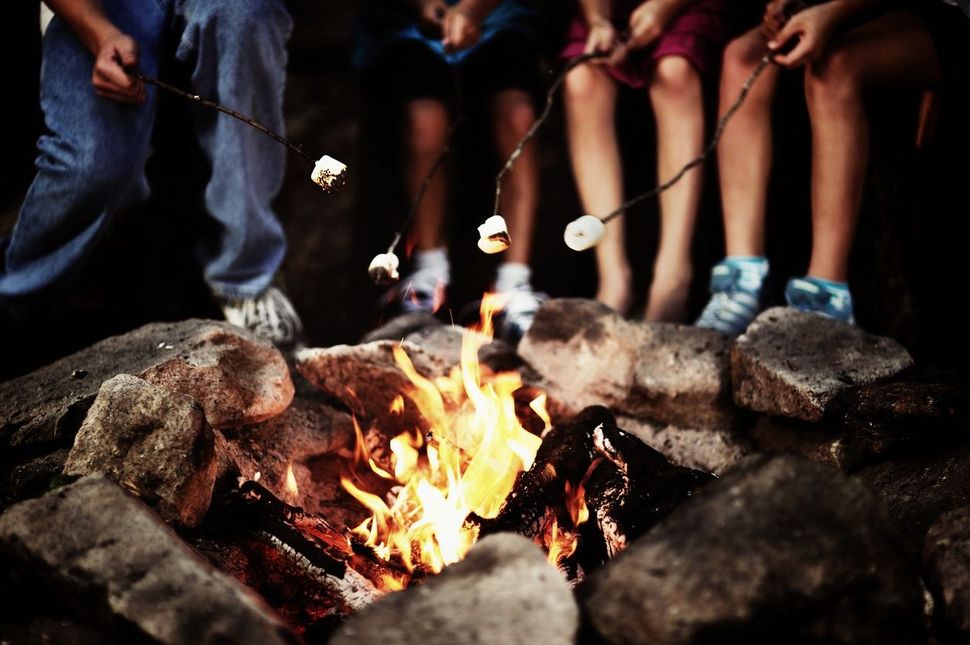 Editor’s Note: In June, we asked you to share your best summer camp memories and stories with us — these are a few of our favorites. Some stories have been edited for length and clarity.

When Muscles, And Feminism, Are Made In The Kitchen:

The year: 2006. The day: Revo, a day when the counselors in training (Madatz) run a day of programming for the rest of camp. The location: the kitchen. The context: a weekly food delivery.

As the oldest campers, we had the opportunity to help the Madatz with aspects of the day. My best friend and I opted to help out in the mitbach (kitchen). Little did we know that it was a delivery day! Over the course of our time at camp, we — two young athletes — learned what it meant to be feminists and we had experienced struggles regularly on the basketball court, when none of the boys passed us the ball. Suddenly, on Revo, we found ourselves standing on the loading platform outside of the kitchen, the delivery man questioning our ability to unload the heavy boxes of fruit, bread and frozen goods. Over the next hour, the two of us single-handedly emptied the truck. Our friend, a boy in our age group, came by and helped the empowered cause — every time the delivery man handed him a box (which was every time, since he refused to hand a box to us “weak women”), he handed it off to us to carry in.

This experience is one of the most empowered moments I have had as a woman and has shaped who I am today. Without Camp Galil, I am not sure that I would be a feminist, have a strong sense of confidence, or really believe that I can accomplish what I set my mind to. Better yet, with my experience, I now know that I can defy the “”weakness”” that society sets upon me and stand up for myself as a strong, empowered woman.

A Meal Before Time

“One day, camp was transformed into a pre-historic Land Before Time, where we spent the day on an epic quest to promote good against evil. As a counselor, I was dressed as a pterodactyl and suspended from the ceiling for the entirety of lunch, squawking and flapping my wings while balancing on a board so that I did not fall. Theoretically, my theatrics I added a sense of realism to the proceedings.

From high above the cafeteria, I watched 200 campers and staff eat and saw the entirety of what we had created together — older campers helping younger, mini-dramas of adolescence emerging and resolving, kids feeling a sense of ownership and power, counselors having conversations that were simultaneously silly and thoughtful. I was exhausted, hungry and chafing, but it was one of the most incredible moments in my 12 years at camp.

Camp Made Me Who I Am Today

My story is nothing specific, but is important. I found myself at camp, shipped off at 12 years old, scared and nervous. Immediately upon entering I remember a sense that this was going to be alright, no it might even be good, maybe great. I spent 4 amazing years building my independence, finding my voice and experiencing my camp family. If not for camp I am not sure I would be here breathing today. I am forever grateful to that place and those people I journeyed with. Go camp!”

The Camp Story That Wasn’t…And Then Was

I was one of those kids who should have gone to Jewish summer camp their whole lives, but for one reason or another, I didn’t. I am from the Los Angeles area and had attended Jewish day school, was very active in USY and loved Jewish life as I knew it. My family is from South Africa, so many of my summers were filled with adventures to visit my Grandma and Aunts, Uncles and cousins who still lived there. But while I told myself I “had better things to do and cooler places to be” than summer camp, I think the truth was I avoided it because I was afraid of the social climate there. In my mind camp was an inhospitable micro-bubble of JAP-y tweenagers I wouldn’t be able to compete with. I knew I would bring all the wrong clothes and the dorkiest sleeping bag. I was certain I wouldn’t be able to make friends with these elite socialites who wore Abercrombie jeans, MAC makeup and lunched with their moms at CPK. Oh how I miss the ‘90s…

Looking back, a lot of this fear was baseless, especially considering I went to school everyday with these same girls and didn’t feel intimidated by them. But summer holds that special essence of freedom, where adults don’t get to make all the rules, and with that can come unknown consequences.

My story changed in the summer after 10th grade when my best friend said she was going to become a counselor in training at Camp JCA Shalom. I knew nothing about the camp and no one who went there. That’s how it can be sometimes…certain kids go to certain camps and I didn’t know there were other options.

That summer changed my life and was the single most positive spiritual experience I had growing up. And it came at just the right time. At 16 years old, instead of suffering through what I feared would be a summer of competing for popularity, I discovered the meaning of kehilah, community.

There isn’t one specific story where it happened, although a few key ones do come to mind, like spending all day choreographing a Shabbat staff dance in 100 degree heat. My summer days were soon filled with these moments of blissful existence. Of living in the now. I don’t remember anyone caring what I wore that day, I’m not sure we were wearing much clothing at all…but those trivial things (which to most 16 year olds are anything but) just disappeared at Camp Shalom.

Time has a way of standing still at camp. Each day is so full of life that it feels like the tick tock of time has a different beat there. Even now, a decade and a half later, I can still remember so many different days like the one practicing that dance. At no other point in my life, except I think in the first weeks when my son was born, do I have this kind of deep and full memory of so many moments. To me that’s the ultimate measure of ‘did I spend my days well?’. Thank you Joel Charnick our camp director and Camp JCA Shalom for the most full days of my life.”

My Hippy Dippy Summer Of Love

It was 1969, the summer of love, when I attended Camp Beker, a co-ed, Jewish summer camp in Schwenksville, PA. The counselors were all hippies. Robyn wore a red bandana in her waist-length brown wavy hair, Kenny’s hair was practically as long, and Ethan played acoustic guitar. They’d load us into a bus and take us on overnights at Hickory State Park, a local campground. We didn’t sleep in tents. “Have you ever slept under the stars?,” Robyn asked, and when most of us told her that we had not, she assigned us each a sleeping bag and a spot on the hard-packed earth around the fire. The flames heated up the night. I had to sleep facing away from them, fearful of an errant spark. I was thirteen years old and I had a massive crush on Seth, who was the son of the camp nurse. The night I remember was when he rolled out his sleeping bag next to mine and we slept next to one another in our separate sleeping bags. He was the first boy I’d kissed. His mouth tasted from the burnt singed charcoal of roasted marshmallows. I don’t think that camps go on co-ed overnight trips any longer, and if my parents knew I’d slept next to a boy all night, I don’t think they’d be very happy about it, but I treasure those times.”

Have a summer camp memory of your own to share? We want to hear it!