Beyond Camels: My Outdoor Adventures With Harvard Hillel 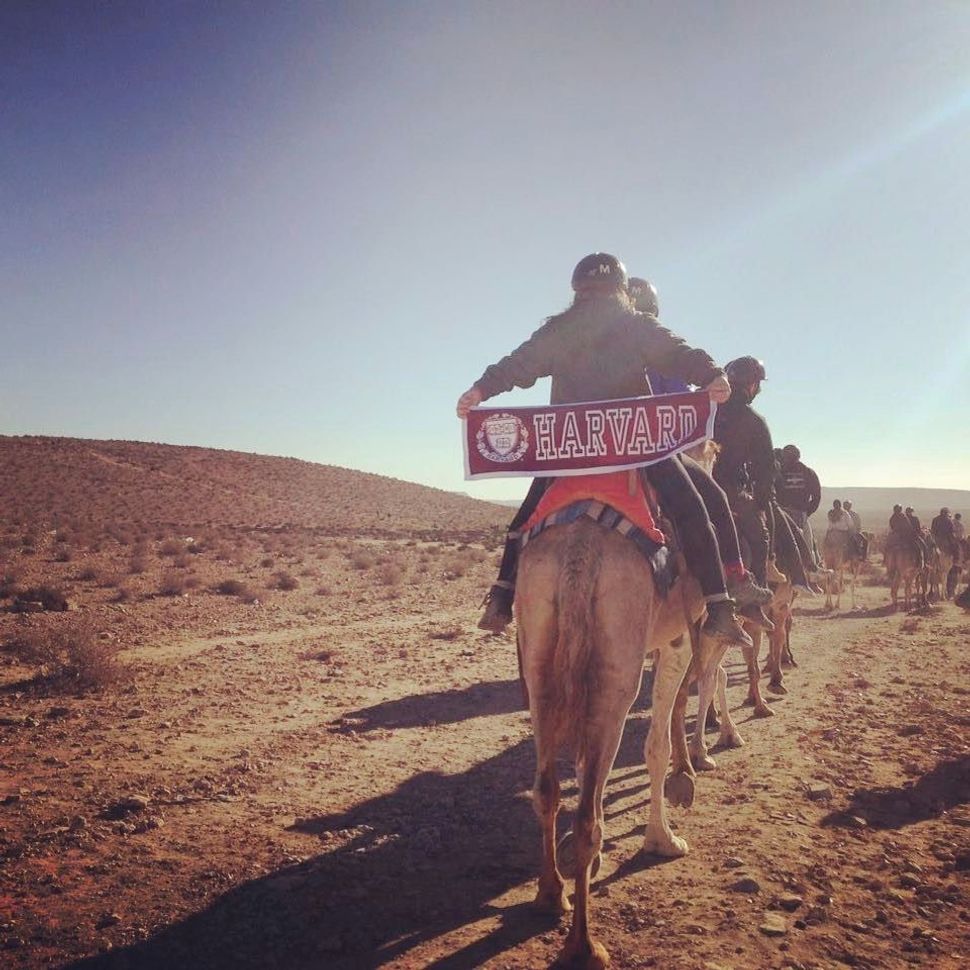 I started Harvard with a vague idea that I was going to be more involved in “Jewish things” on campus. What that meant, I had no idea. Birthright seemed like a good place to start, and so sometime in the first few weeks on campus I found the contact information for Hillel’s Israel coordinator, Lauren.

I must have said something to Lauren about wanting to be more involved at Hillel, because somehow, a week later, I found myself in a car on the way to a pilot “Shabbat in the Woods” Hillel program with 12 other Jewish Harvard students I’d never met. Naturally, everyone else knew each other except me. At the end of the weekend, I forgot that I’d originally felt like a stranger. After crouching under a tiny makeshift wooden sukkah we’d built outside, hiking through the woods on Shabbat, and playing Cards Against Humanity with the Hillel Orthodox Rabbi, I felt completely at home. When we got back to Hillel, we formed the Jewish Outing Club.

In the next months we planned monthly weekend trips into the woods, one ski trip, and an end of year trip to the beach. What makes the Jewish Outing Club unique isn’t just that we get off campus for monthly bonding and community building. It’s that the club brings in people from all different parts of Hillel: Modern Orthodox students, Reform students, Atheist-Jewish students, and a few Hillel staff members.

I came to Hillel with no real plans except going to Birthright, and ended up sucked into the community. When Birthright itself came along, Hillel opened up doors to me and my Jewish identity I didn’t even know needed to be open. As part of our Israel trip, Hillel organized a four day “Trekstention” to investigate issues that a standard Birthright itinerary does not cover in depth.

Strangely, even with 10 days of Birthright, it wasn’t until I was standing in Bethlehem on the Trekstention, listening to Palestinians speak about their perspectives on the occupation and their own lives and hopes, that I realized how intensely personal Israel and my Jewish identity is to me. In addition to visiting the West Bank, the Israeli Supreme Court, and meeting with a diverse array of Israeli political leaders, we also spent time with Israel’s Haredi community. The Haredi man we spoke to, Eli, told us that if we were ever back in Israel, we should call him. A few weeks ago I did, and I ended up spending the weekend with his community in Jerusalem. It was an eye opening immersion into a part of Israel and Judaism that I don’t interact with much.

I don’t remember what I expected from Hillel when I started school, but whatever they were, Harvard Hillel has blown those expectations out of the water.

Beyond Camels: My Outdoor Adventures With Harvard Hillel