The Case For Nonviolent Resistance: It’s Right And It Works 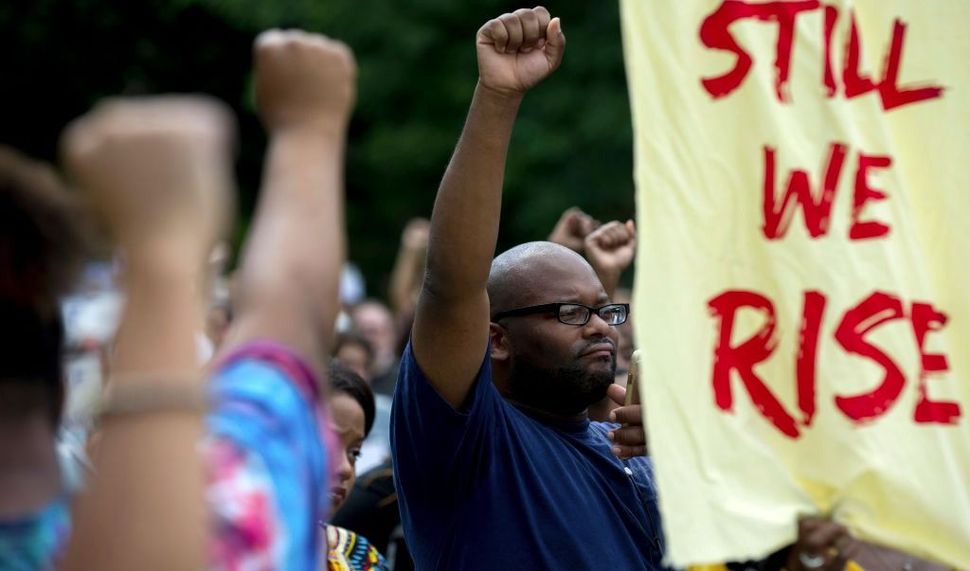 President Donald Trump, in his press conference reversing his statement from his previous press conference which reversed his statement from his previous press conference, equated violence on the left with violence on the right. In essence he was saying that those who went to Charlottesville because of justifiable fear that neo-Nazis, White Nationalists, White Supremacists, and others from the basket of deplorables would violently attack peaceful protestors and innocent bystanders, were as culpable as the deplorables themselves. The people who showed up in camo gear with military style weapons, who brutally beat an African-American man, who marched back and forth in front of a synagogue chanting anti-Semitic slogans, and who ultimately killed a 32 year old woman, were the same according to our president, as those trying to use force and the threat of force to stop all of the above actions.

This week our president has lost any credibility that he might have had left. Even CEO’s of the most rapacious corporations (Walmart comes to mind) condemned his moral obtuseness.

The question I have been pondering is this: does this week of White Nationalist racist violence give credence to the argument of the antifa that the only logical, rational and ethical response to these people is to beat them down? Cornell West, a student of nonviolence, said that the antifa and the anarchists at the demonstration in the Park in Charlottesville saved his life, and the lives of the other clergy who were under threat of violence from the racist thugs.

Ta-Nehisi Coates has argued that it is immoral to demand that oppressed people act nonviolently. He argues that in US history, starting with the famous Boston Tea Party, all American gains have been achieved through violence or the threat of violence. Even during the civil rights movement, Coates argues, it was the threat of Malcolm X that gave Martin Luther King’s opponents the motivation for dealing with him.

Peter Beinart argues, on the other hand, that the antifa’s tactics are troubling. (It’s important to stress that he draws a strong distinction between the Antifa violence and the nazi and white supremacist violence.) Beinart’s argument is that Antifa violence is used by conservatives to justify right wing violence, which allows the right to portray itself as victims, and by using violence, the left loses the moral high ground.

I agree with Coates’ arguments but with Beinart’s conclusions.

It is obviously true that white folks trot out MLK quotes about love and nonviolence when black and brown folks are standing up to oppression and never when cops, the government, or the carceral system are the ones deploying the violence. This just makes the strong case that people who argue for nonviolence have to also make that claim in the first person plural. “You should be nonviolent!” is not as strong a moral claim as we should be nonviolent (as long as the one making the claim is actually part of the “we”).

The commitment to nonviolence is grounded in two solid foundations. A spiritual or religious commitment to being the community you want in the world; and a strategic understanding that nonviolence works more often than violence does.

Dr. King practiced and preached nonviolence, in part, as a tactic to expose the ugliness of white supremacy. That is, the institutional racism of city, state, and federal government—which was violent in both rhetoric and act—was conducted and deployed behind a veil of willful ignorance, and the cover of “normalcy.” Using nonviolent direct action as a form of agitation, tore the veil off and forcefully exposed the ugliness of the system to those who had been able to make believe it didn’t exist. The prosaic sign that said that black people were not served at the lunch counter was revealed to mean that white people were enforcing a violent structural hierarchy.

The practice of disciplined nonviolent action was rooted in the belief that most people in the country would be appalled by the blatant violent racism of the thugs and bullies, and also that acting nonviolently would create a more nonviolent world. Rabbi Aharon Shmuel Tamares states this most explicitly: It is this lesson that the Holy One of Blessing showed Israel during the last plague of the Egyptians, that when God adjudged a capital verdict on the evil one, God executed the punishment by Godself. In the language of the author of the Haggadah: “And I passed over in this night: I and not a messenger.” The Holy One of Blessing could have given Israel the power to avenge themselves upon the Egyptians; however, the Holy One of Blessing did not want to show them the way to use their own fists. And even if in the present moment it was to defend themselves from the evil ones, however, by this way [i.e. the use of violence] violence spreads in the world, and from defenders they will ultimately become pursuers.

Even at the moment of final retribution, when the victims of centuries of oppression could have wreaked justified vengeance on their oppressors, God reserved the use of violence as a Divine prerogative. God caused the Israelites to be locked away in their houses on that night so that they would be taken out of the cycle of violence. Tamares is more explicit about the claim that violence, even seemingly justified violence (“even if in the present moment it was to defend themselves from the evil ones”) only brings about more violence.

The romantic notion that the blazing vengeance of righteous violence will sweep away evil and cause it to turn tail and run, is counter to the way of the world, according to Tamares. Violence engenders more violence. The only way to stop violence is to stop being violent.

In addition to a belief in the religious and spiritual efficacy and righteousness of nonviolent action, it is also more effective pragmatically. Gene Sharp has been discussing analyzing and evangelizing for nonviolent resistance on the basis of its utility and pragmatic value for decades. His book listing 198 nonviolent methods of resistance is thought to have been one of the sparks that lit the Arab Spring. Until recently, however, there has not been any quantitative research into nonviolence which judged its efficacy.

In short, if confronting and dismantling white supremacy in all its forms — racism, antisemitism, xenophobia, anti-Muslim bigotry, homophobia, transphobia, classism, ableism — is part of creating a better and more just community and country, then we need to be that community now, and we need to adopt tactics that are likely to help us win. While physical violence may have a romantic glow from the gunmen of yore riding in to rid the town of its menace, or the partisans fighting in the forest, the truth is that it is not the most effective strategy by a long shot. The resistance must be a reflection of the community we want to build.

Aryeh Cohen the author of the book Justice in the City: An Argument from the Sources of Rabbinic Judaism is a professor, a social justice activist, a rabbi and a lecturer.

The Case For Nonviolent Resistance: It’s Right And It Works