For One Holocaust Survivor, A Lifetime Of Activism Began With Homemade Cookies 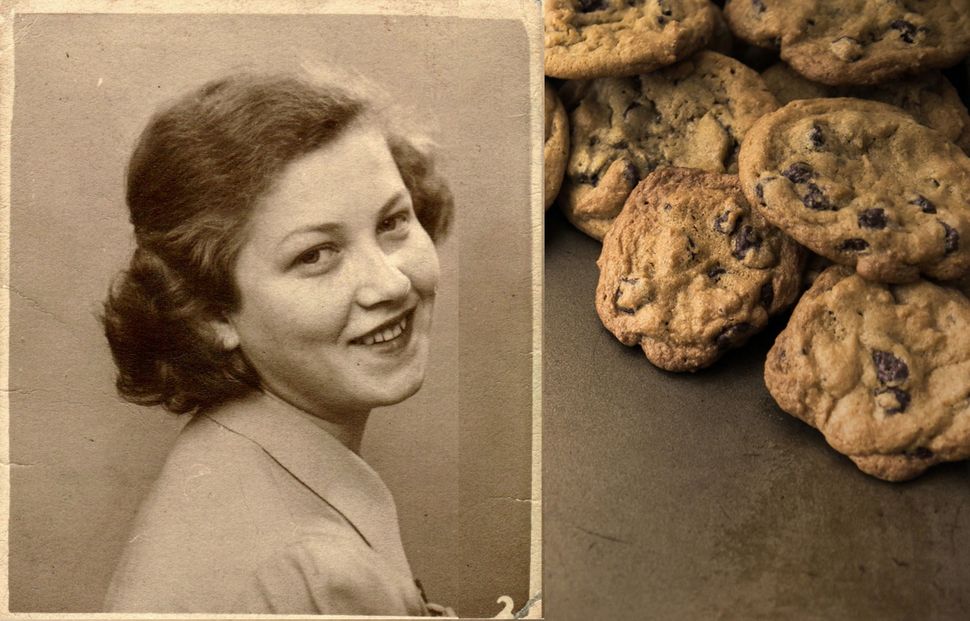 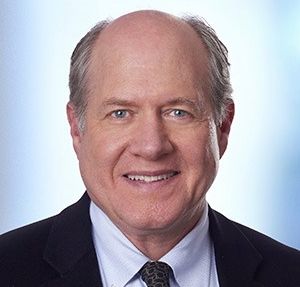 On June 9, two German law enforcement agents arrived at my mother’s Minnesota apartment. As one of the last remaining survivors of the Stutthof concentration camp, she could provide testimony to help determine whether to pursue an indictment against a former Nazi SS guard. For more than four hours, the investigators questioned my mother on the living conditions, the killings she witnessed and the role of the SS guards.

I’ve heard my mother tell her story many times, but I was not prepared for what happened next.

My mother, Judith Meisel, was 14 years old in June 1944 when she was taken off the train with her sister and mother and herded into the overcrowded barracks at Stutthof, near Gdańsk. Now 88, she has dedicated her life to speaking about her experiences as a Holocaust survivor. A documentary film, “Tak for Alt: Survival of a Human Spirit,” chronicles my mother’s forced removal from her Jewish home in Josvane, Lithuania, to the Kovno (now Kaunas) ghetto, her imprisonment in Stutthof, her escape during a death march, hiding out with her sister in a cloister of nuns, pretending to be a Lithuanian Catholic while working at a German Wehrmacht station, and her eventual liberation in Denmark. 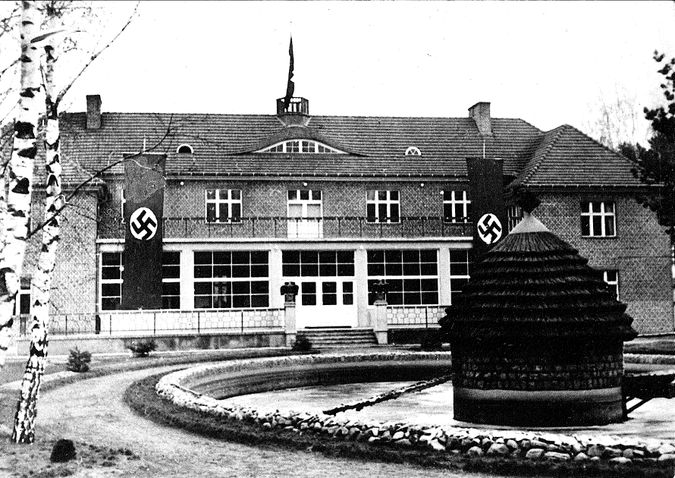 “Lief, Judit, lief!” Those words (“Run, Judith, run!”) were the last ones my mother heard her mother speak. An SS guard pulled Judith away just before her mother was ushered into the gas chamber at Stutthof. The Germans killed 65,000 people at Stutthof, including my grandmother, Mina Beker, whom they murdered on November 21, 1944. We know the date because they kept a detailed log book in which they recorded the names, birth dates, nationalities, and other personal data of the victims – including the date she was murdered.

My mother’s story is more than a remarkable saga of resilience and will to survive. She was reborn in Philadelphia when her activism in the civil rights movement gave her a new purpose. Raymond Pace Alexander, a former Philadelphia City Council member and the first black judge appointed to the Court of Common Pleas, was out walking his dog one day in our West Mount Airy neighborhood when he met my mother and invited her to a dinner. Among those at the dinner table was Martin Luther King Jr., who explained the Jewish dietary laws to the other diners on my mother’s behalf. My mother then helped organize the Philadelphia contingent that traveled to the March on Washington to hear King deliver his famous “I Have a Dream” speech on August 28, 1963.

Two days later, a violent mob accosted the first black family to move into Delmar Village, an all-white, working-class development in Folcroft, Delaware County. Windows were shattered, doors broken, and the Baker family spent their first night in the cellar of their new home. State troopers were called in to quell the violence. Seeing this on TV, my mother could not be silent. She baked cookies, drove to Folcroft and, as people yelled at her, rang the doorbell and introduced herself to Sarah Baker.

Those cookies started my mother on a path from which she has never veered, a lifetime commitment to use her survival as a vehicle to combat racism and prejudice. But as often as she has shared her story, she never told it as she did last month. 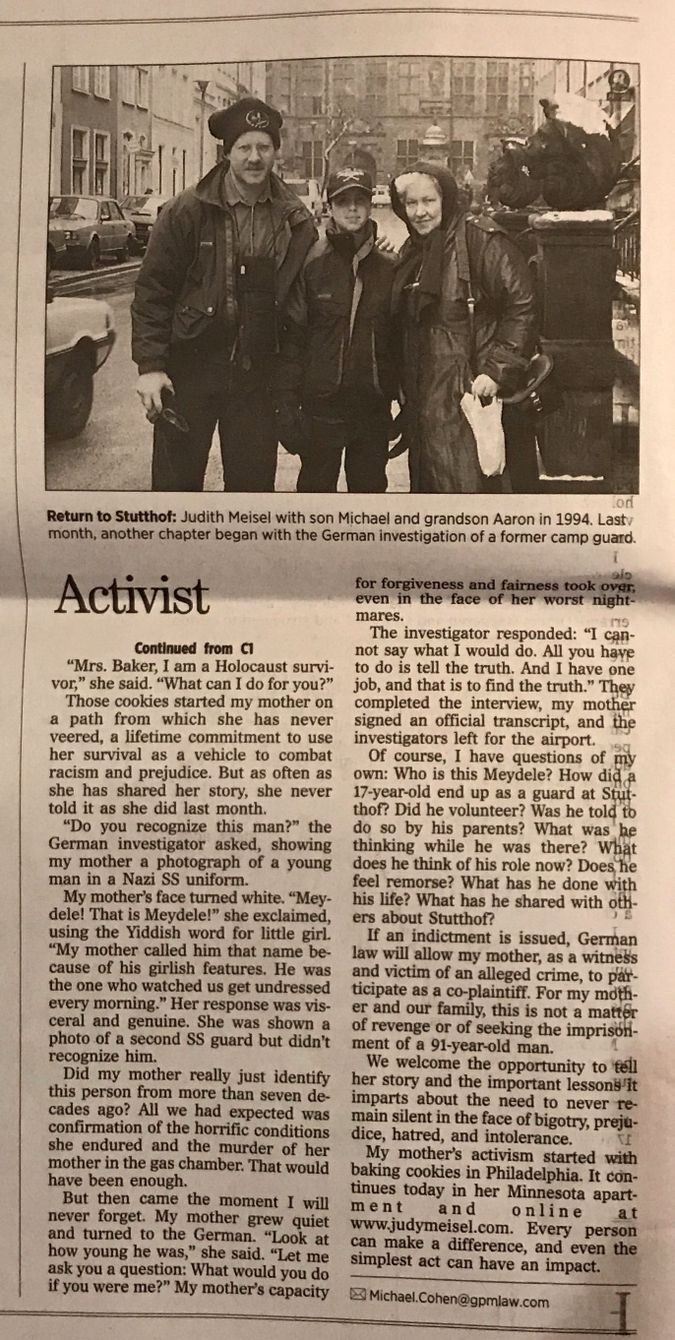 “Do you recognize this man?” the German investigator asked, showing my mother a photograph of a young man in a Nazi SS uniform.

My mother’s face turned white. “Meydele! That is Meydele!” she exclaimed, using the Yiddish word for “little girl.” “My mother called him that name because of his girlish features. He was the one who watched us get undressed every morning.”

Her response was visceral and genuine.

Did my mother really just identify this person from more than seven decades ago? I had expected confirmation of the horrific conditions she endured and the murder of her mother in the gas chamber. That would have been enough.

But then came the moment I will never forget. My mother grew quiet and turned to the German. “Look at how young he was,” she said. “Let me ask you a question: What would you do if you were me?” My mother’s capacity for forgiveness and fairness took over, even in the face of her worst nightmares.

The German investigator responded: “I cannot say what I would do. All you have to do is tell the truth. And I have one job, and that is to find the truth.” They completed the interview, my mother signed an official transcript, and the investigators left for the airport.

Of course, I have questions of my own: Who is this Meydele? How did a 17-year-old end up as a guard at Stutthof? What was he thinking while he was there? Does he feel remorse? What has he done with his life? What has he shared with others about Stutthof?

For my mother and our family, this is not a matter of revenge or of seeking the imprisonment of a 91-year-old man. We welcome the opportunity to tell her story and the important lessons it imparts about the need never to remain silent in the face of bigotry, prejudice, hatred and intolerance.

My son Ben sat in on the Germans’ interview of his grandmother and was inspired to create a website and a Facebook page giving new life to her story. We have been overwhelmed by the response, especially from millennials .

My mother’s activism started with baking cookies in Philadelphia. It continues today in her Minnesota apartment and online. Every person can make a difference, and even the simplest act can have an impact.

Michael Cohen is a lawyer at Gray Plant Mooty in Minneapolis.

For One Holocaust Survivor, A Lifetime Of Activism Began With Homemade Cookies