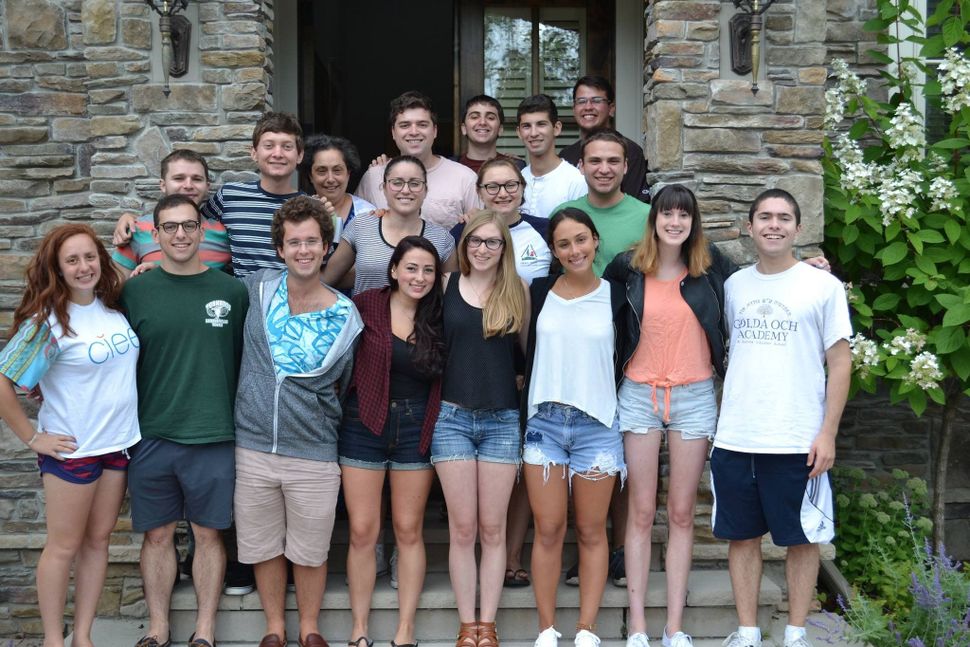 With its abundance of cultural and creative offerings, Providence has been dubbed the “Creative Capital.” Head down a typical street in the capital city of the country’s smallest state and you are likely to find a unique gallery, a memorable lecture, an edgy film screening, or a highly reviewed, locally-sourced restaurant.

Drawing inspiration from its host city, Brown RISD Hillel taps into this creative spirit from the smart and talented students who attend the two world-class institutions that it serves. Brown’s Open Curriculum puts students in the driver’s seat of their academic experience while RISD provides a creative engine that stresses reflection and application in the studio. Both draw ambitious students looking for a rigorous and thoughtful academic approach.

Considering that context, it is no surprise that Brown RISD Hillel prides itself on the creative output of its students — in countless media. Students express this through art shows in the Hillel gallery, hauntingly beautiful Kabbalat Shabbat harmonies, cooking a farm-to-table Shabbat dinner, crafting ten-plus Passover seders each year, klezmer and a cappella performances, and even an annual literary journal.

The intentionality of these campus cultures spawned a digital album — perhaps even a virtual archive — of Jewish students’ reflections on their identity which is emblematic both in its use of the arts to engage the community in a conversation of what it means to be Jewish today and its representation of an incredibly diverse community on College Hill.

Inspired by Humans of New York, alumna Rebecca Carrol created Jews of Brown during her year as a Brown RISD Hillel engagement intern. “Showcasing your favorite Jews at your favorite university,” Jews of Brown seeks to show there is no single way to be Jewish at Brown. Differing in denomination, sexual orientation, gender identity, class, race, ethnicity, politics, and more, hundreds of students who self-identify as Jewish have been photographed, interviewed, and asked the question “What does being Jewish mean to you?” Nearly four years later, and after Hillel International’s subsequent launch of Jews of the University based off the Jews of Brown model, their answers weave together to form a beautiful tapestry of Jewish life at Brown and the broader global Jewish community.

Peruse through the interviews and one sees the vibrancy of the Jewish community at Brown come to life:

“Being Jewish is the basis of my identity. It’s influenced how close my family is, how I interact with my friends, how I carry out my daily life. It’s something I’m very proud to have, and I think that being Jewish is just a beautiful thing. To have a community wherever you go in the world, to have a protected homeland of our own, and to have unwavering pride in our people are things that Jews should not take for granted.”

“A lot of people don’t know that I’m Jewish. My dad is Chinese and my mom is Jewish. There is actually a lot of overlap between the two cultures.”

“When I was in the yeshiva world, being Jewish was my life. I was surrounded by a community that was driven by religious idealism and devotion, which I loved. I found meaning in “mussar,” the Jewish practice of character development. Analyzing the Talmud was a practice of self-improvement for me, for it helped me to sharpen my analytical and moral thinking. I also found deep meaning in the mystical teachings of the Kabbalah, which helped me to feel connected with the Divine. Now, being Jewish to me means belonging and contributing to a supportive community with a shared history, in which people understand my background.”

“I like that Judaism is more about the questions than the answers.”

“My mom is Puerto Rican and my dad is Jewish.”

“Being Jewish relates really well and really closely to a lot of my academic interests, in that I see within the religion a series of teachings about how to responsibly care for people around you. One of the things that I really get about going to my synagogue back home is getting meaningful inspiration about how to continue to pursue my advocacy. But at the same time, I think that being a Jew of color is really confusing and really hard sometimes. When people see me they don’t see Jew, they see Black. In a lot of Jewish spaces, I feel like ‘Other.’ I feel like I have to justify my presence, and I think that even a lot of well-meaning people can latch onto my racial identity and tokenize me or other Jews of Color as evidence of inclusion or diversity. It’s really troubling to see a lot of the systems of powers and privilege, racial privilege and domination, that I think Judaism is so loaded with to fight being reproduced within some of the Jewish spaces that I occupy. I think being Jewish is a source of tension and a source of constancy at the same time.”

“That’s always been a tricky thing. My dad is Jewish and my mom is Muslim. Whenever I tell people that, they’re like, ‘Ok, how does that work?’ or they’re like, ‘Huh. Interesting. Weird…’ because it’s not your everyday combination.”

“I would say hanging out with my grandpa.”

“To me, being Jewish means finding things within the larger umbrella we call Judaism that connect us. For me, personally, I’m a big believer in observance — keeping kosher, Shabbat, things like that — practical, concrete things we can do, that other Jews do, that connect us to the Jewish community.”

“My mom is Catholic and my dad is Jewish so I had a Bat Mitzvah and a confirmation.”

“Being Jewish is about the education. Jews never needed to build physical homes, but rather build their minds. Jews always had to flee from different places, so they carried what was most important to them. My grandparents had to flee Tunisia after the independence war with France and ended up in Paris, having to start their life again.”

“Being Jewish is about having an immediate community wherever you go.”

Brown RISD Hillel strives to meet its mission of “encourage[ing] and support[ing] a diversity of students as they explore, develop and deepen their Jewish identities.” Considering its commitment to “having Judaism serve as a source of meaning and growth during their time on College Hill and in their lives after graduation,” Jews of Brown is both a creative vehicle for that work and a key indicator of our success.