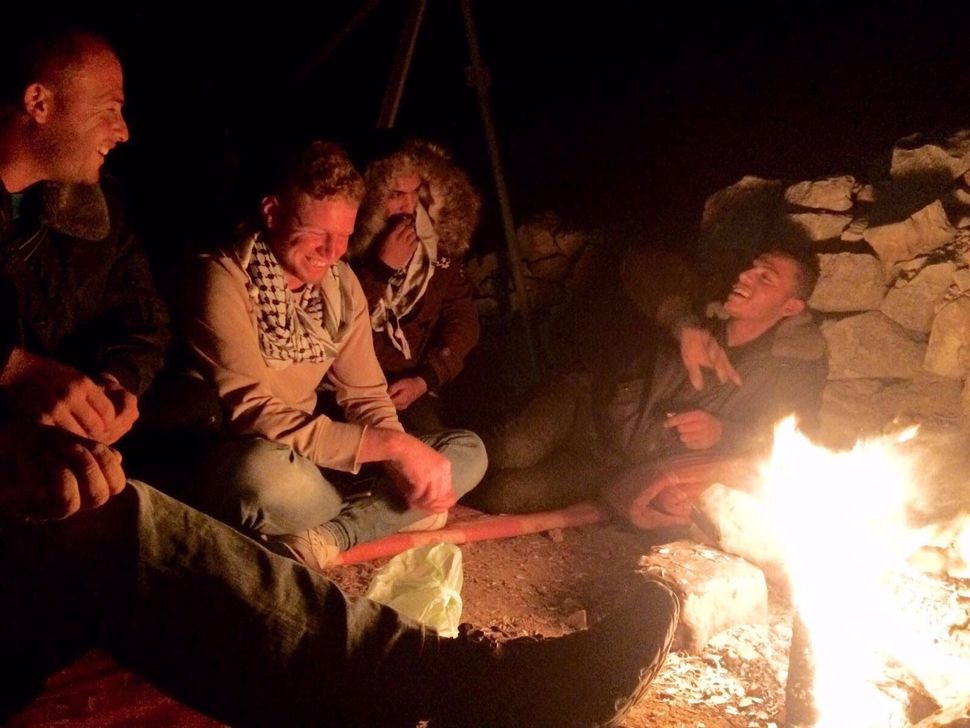 In early September 2017, Israeli Prime Minister Benjamin Netanyahu spoke to thousands of settlers in the northern West Bank settlement of Barkan at an anniversary celebration for 50 years of Israeli West Bank settlement. “We will not evacuate any more settlements in Judea and Samaria… We are here to stay forever,” he said.

The following Sunday, the Israeli army arrested a little-known 20-year-old nonviolent Palestinian activist in Area C of the West Bank. One thing likely had little to do with the other — but this is how the system of occupation works: big statements, little moves.

Back in May, a group of 150 Diaspora Jews traveled to Palestine to stand in solidarity with nonviolent Palestinian activists. They were joined on the ground by Diaspora Jewish activists from the anti-occupation collective “All That’s Left,” Israeli and Palestinian activists from Combatants for Peace and a number of West Bank Palestinian organizations, among them Holy Land Trust It was an unprecedented coalition that came together to for the first time to do one thing — Build Sumud: Freedom Camp.

The objective was to allow local Palestinians to return to caves they had been evicted from twenty years earlier. Together, activist dug out caves, carried in water, erected shade structures and, despite numerous run-ins with the army, remained. Sami Huraini was part of the reason why. His father, Hafez Huraini, is the head of the local popular resistance committee, which was a member of the coalition. Sami had been there since day one, and made the caves his home.

Saturday September 2 at 10 a.m., while sleeping in one of the caves, Huraini was awoken, arrested, and taken into to the Kiryat Arba settlement police station. The officers were in plainclothes. They took him away in an unmarked Toyota. When he finally arrived at Ofer Military Prison, he said he felt “completely lost.”

Sophie Schor, 24, an American-Israeli activist who grew up in Denver and organizes with Combatants for Peace, got the news via WhatsApp. She had spent time with Huraini when Sumud was erected in May and had extended her flight twice back to Denver to help maintain the camp through the month of Ramadan. “My heart is broken,” she said at the time. “Sami is my partner in this. I have never met someone so committed, so young, so capable and so ‘in’ this, than Sami. He just turned 20 a week ago.”

Huraini was told he was being charged with assaulting a journalist from Arutz 7, a pro-settler media news organization. A few weeks earlier, a member of Arutz 7 had come to Sumud and a video had been published on its website of Huraini angrily yelling at the cameraman to leave.

What the video had failed to show was that the Uzi the cameraman also carried. “My small sister was in the cave and I don’t want them to come in with the gun,” Huraini said. After all, they these were settlers, he said. “I know who they are and I know what they want.”

Other Diaspora Jewish activists involved in Sumud were on the ground, and moved fast. Heli Mishael, 27, was one such activists. When she heard that Huraini had been arrested, she said, “I immediately went down to the military court. I asked the lawyers to get us permits to get in…I had seen Sami the previous week – five days before that. I saw him at a nonviolence training in Beit Jala.”

Mishael said that she thought that Huraini arrest was a deterrence mechanism. “The day before they had just come to get his brothers and separated them into different rooms, covered their eyes and kept them there for half a day. It almost sounded like the army created a strategy to crack down on this whole thing.”

Mishael has been working in Sumud for almost three months now, and she’s developed a close relationship with Huraini and his whole family. “We’ve built the cave, talked about politics, talked about how we want the future to look,” and she called his arrest “outrageous”. “I have gone to Sumud,” she said, “because I feel that I can support the community – the Huraini family especially – by being there and being present.”

Mishael, who grew up in Finland donating to the JNF and volunteering for WIZO, is half-Finnish, half-Israeli. About a year and a half ago, she says, a group of people in her community made a request that she not be allowed back in. Though she hasn’t been in Finland in some eight years – living abroad, finishing an MA from the Harvard Kennedy School, “they see my views through Facebook. And there’s this spillover effect from Israel.”

Schor and Mishael will keep going back to Sumud — they believe that their presence and support matter. “American Jews should care because things like this are being done by the Israeli military for them. In the name of protecting the land of the Jews – for them.” Schor Said. They are among the growing number of Diaspora Jews who have joined in active solidarity with Palestinian on the ground. They are a new kind of Diaspora Jew — they are not only looking at the big statements, like Netanyahu’s announcement last week that settlements are here to stay — their eyes are on the little moves. The Sami Hurainis.

Huraini was released yesterday. “Alhumdulilah the lawyer was very good and the support was very strong and we succeed,” he said. Still, he is sure more is yet to come. As he walked free out of the courtroom, that same cameraman from Arutz 7 told him to “have a nice day”. He didn’t take it as a good sign.

But Huraini now also knows that a good many Diaspora Jews are there for him, and that if this happens again, they’ll be there again.