What Is The Jewish Obsession With Intermarriage Really About? 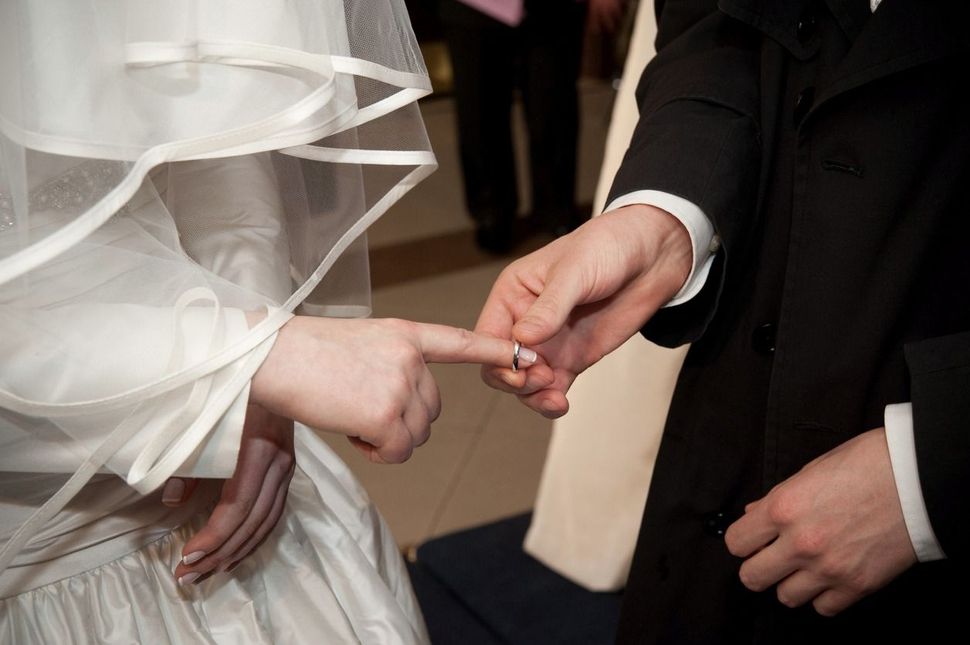 Last week, the Forward published a piece by Allison Darcy entitled “Are Your Views on Intermarriage Racist?” It’s a well-written and thoughtful piece, and even as a religious woman who is opposed to intermarriage, I agree with many of her points. Particularly this one: “There is a big difference between wanting to marry someone who shares your religion, and wanting to marry someone who shares your race. I believe that if you’re a religious Jew and you believe your partner should be one as well, this stems from a religious source. However, if these calls for universal in-marriage allow for either party to be a Jew of no religion, some amount of that conviction is based on ideas of racial purity.”

Exactly. Now allow me to take this a step further.

The question of intermarriage and continuity is a central theme in my upcoming novel, By Light of Hidden Candles.

There’s a scene in the book where a well-meaning but rather tactless Chabad rabbi tries to explain his views on intermarriage to a Catholic college student who is attracted to Judaism — and, more than he would rather admit, to his religious Jewish friend. The following brief excerpt is written from the perspective of the student, Manuel:

I couldn’t hold back my anger any longer. “It’s fine for you to be interested in Judaism and to learn, but stay away from our women? Is that what you’re telling me?” I spat…

“Manuel, please, sit down. I know this is upsetting and I’m sorry, but please let me explain.”

I hesitated, and then sat down slowly, trying to breathe deeply to calm the pulsing in my forehead.

“Jews have lived under an existential threat since the destruction of the First Temple. For most of history, that threat expressed itself through hatred, violence, oppression, and genocide. That does still exist today, more in some places than others, but most modern Jews are facing a very different kind of existential threat now. Assimilation rates in the USA are alarming beyond all measure. This isn’t about individuals and how they might feel about each other. This is about our destiny as a nation.”

I folded my arms. “What if a couple decided to raise their kids Jewish? Isn’t Judaism passed down only through the mother?”

“Yes, and that might work for the first generation. But even then, the children might look at their parents and say, ‘Well, if this Judaism thing is so important, why is my dad not Jewish?’ It certainly wouldn’t be important enough to them to go out of their way to marry Jewish themselves. So what about the next generation, and the next? Jews are disappearing this way, Manuel. I’m not talking theoretically. This is very real, and it is happening right now all over the world.”

I just sat there scowling at him.

“This isn’t only about Alma’s commitment to Jewish continuity, either. As a person who values Jews and Judaism and who believes they have something important to contribute to the world, now and in the future… this should be important to you, too.”

I stood up again and fixed him with a glare. “I don’t need you to tell me what is important to me… Rabbi.”

What’s So Important About Judaism?

The thing that I find astonishing surrounding all of the discourse on intermarriage is that no one seems to be asking the question, which is really at the center of the fictional Rabbi Uri’s argument above:

Is Judaism important? And if so — why?

Rabbi Uri argues that the main problem with intermarriage is that it threatens “Jewish continuity.” Darcy would disagree: she writes that millennial children of intermarried couples identify more commonly as Jewish than before.

But what does Rabbi Uri mean by “Jewish continuity”? Does he mean Judaism as a race? As a religion? As a culture? As an identity?

What does Darcy mean by it?

She writes: “Communal memory of trauma is powerful and important, and reinforcing a community is a tool of defense against emotional harm and a foundation for solidarity. We focus on this, and our belief that Jews should marry Jews is about the perpetuation of a religious culture and group, and not about keeping others out. It’s about sharing beliefs, history, values.”

In other words, Judaism isn’t just a race, it’s also communal memory, a belief system, a shared history, a value system and a support system. But she is concerned that that’s not really what this is about, which she expresses as follows:

I join Darcy in asking — why?

Is Judaism a Race? A Religion? A Culture? Or Something More?

To me, Judaism is a mission.

I believe that mission was given to us at Mt. Sinai, and it has been the hardest, most complicated mission in the history of humanity. On the micro, day-to-day level, it involves the constant awareness and sense of purpose we infuse in even the most mundane actions when we keep Jewish Law — from what we put in our mouths to thanking God for a functioning body when we emerge from the bathroom. On a macro, historical level, it has involved millennia of persecution and a need to constantly reevaluate how to maintain our common identity through the upheavals and storms of history — a thorn in the side of the nations, challenging them to create a moral society. Our challenges today are new and unique; we live in a world where, for the first time since the kingdom of Solomon, just about half of the world’s Jews live under one Jewish sovereignty — and that state is being held under a microscope, just like we, as a nation, have been for so many centuries. Ever since we were freed from slavery in Egypt, the world has been watching our every move.

The Jewish story is unprecedented and unparalleled among all the stories of the nations. I am proud to be part of that story, and I want my children and their children to be part of that story. My opposition to intermarriage comes from an overtly religious belief that we must maintain our identity not for its own sake, but because our identity has a purpose. That purpose is no less than to save the world and infuse it with the spirit of God.

I want them to remember not only who they are, but why they are.

Why does Jewish continuity matter?

Why does it matter if your grandchildren are Jewish?

What’s so terrible about the idea of Jews assimilating into other cultures and fading into a fond cultural memory, like many other nations that are remembered today for their greatness, but no longer exist?

As a religious woman who believes that there is a Divine plan for the universe, and that the Jews have a central role, I have an answer to these questions.

What Is The Jewish Obsession With Intermarriage Really About?