What The Talmud Has To Say About The Stars 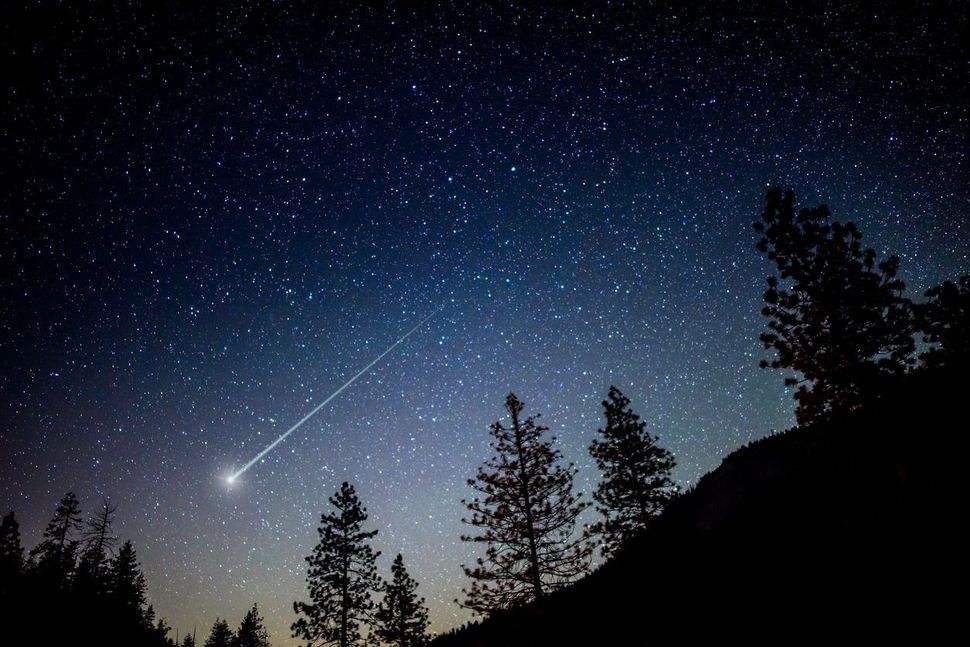 I have very distinct memories of my childhood nights in the Sukkah. I grew up in an ultra-Orthodox Jewish home in upstate New York. We were not permitted to eat a meal or sleep — even take an afternoon nap – outside the sukkah. After the meal on Sukkot evening, we would put the table at a corner, wheel in the sleeping cots, and voila! The sukkah was turned into a men’s bedroom for seven nights in a row. (Imagine the odor. And the snoring!)

Boys under Bar Mitzvah are not required to sleep in the sukkah, but big kid that I was, I would never sleep in my bedroom on Sukkos nights. I would join the men and spend my night in the wooden hut in our backyard. Occasionally the wind would squeak through the cracks between the panels, and a slight chill would penetrate the wools. I would cover my little body up to the eyes with the warm blanket my mother gave me; I would lie down on my back; look up at the schach – the branches we use to roof the sukkah – and gaze. I wanted to see the stars.

Halacha dictates that schach, covering, should be sparse; if you can’t see the stars through them, they are too dense. When erecting the sukkah, my father, a towering scholar with a scrupulous adherence to all the Halacha minutia, would painstakingly place the round bamboos apart enough from each other so that they don’t obscure the stars at night.

But for me, stargazing on the sukkos nights became a habit. Sleeping in the freedom of nature, it gave me a warm, cozy feeling. It was my own version of camping in the woods, an activity I never got to enjoy. The full moon was smiling at me, throwing a sliver of light on the beautiful sukkah ornaments. The stars seemed so far; the sky so dark; and the universe so vast. And here I was, a little kid sleeping in the sukkah like an adult, looking up to the endless, expansive sky. I felt very small.

In my Hasidic yeshiva they didn’t teach astronomy. Instead, I got my lessons in “astronomy” when studying Talmudic passages that pertain to the heavenly spheres. I “knew” about the seven planets that revolve around earth — the Sun and moon among those ‘planets’. I didn’t even know the real difference between planets and stars. In Talmudic astronomy, which abides by the Ptolemaic, geocentric model, the planets are called ‘moving stars’, because they revolve around earth on their individual orbits, unlike the ‘sitting stars’, which refer to all the other stars in the night sky. They are fixed forever in the heavenly sphere.

As an adolescent, I also became quite proficient in Talmudic astrology, or the mazulos — the astrological signs of the planets and stars that the Talmud took very seriously. Each planet has its own mazal. The mazulos played a role in our daily lives. On the winter Friday nights we had to wait a long time for my father to do the Kiddush because, according to Talmudic understanding, Mars is dominant early Friday night. And Mars is no good — it portends blood. You can’t drink the Kiddush wine while bloody mars roars its head.

I also knew about the mazulos that are the zodiac signs. The heavenly sphere, I was taught, makes a full circle around Earth every 24 hours, and each month it begins with a different mazal; a different constellation of the fixed stars. Tishrei, the month of October, is the mazal of Moznaiim, or Libre – a weighing scale. That indicates judgment day of Rosh Hashana, when each person’s merits and sins are weighed on the scale. His or her heavenly verdict will measure accordingly.

In Talmudic theosophy, we have a personal relationship with the heavenly bodies. With a mere utterance of his mouth, God brought them into existence roughly six thousand years ago, and literally hung them up on the sky for our service. The sun was created to illuminate earth and to help us keep the holidays on season; the moon was created to help us create a calendar and count the months accordingly; and the stars served an even more meaningful purpose — to dictate the outcome of our lives.

A number of years ago, I came across the Cosmos series by Carl Sagan. I already knew at the time that the Talmudic astronomy I was taught in the twentieth century was somewhat outdated. I knew about the Copernican revolution and I knew that planets aren’t stars. But I didn’t realize how much I was still missing. ‘Cosmos’ was a window to the changed horizon in the scientific world in the past couple centuries, and it changed my whole perspective towards the infinite universe.

When I now gaze at the distance stars, I keep wondering if some alien creature far, far away, look back at me with the same sense of wonder. Sagan’s captivating voice is ringing in my head, “why should we, tucked away in some forgotten corner of the Cosmos, be so fortunate? To me, it seems far more likely that the universe is brimming over with life.”

When I now look up at the sky I know that the universe is far vaster than I could’ve ever imagined as a seven year old, seeing a few dozen stars through the schach. The notion that a small, insignificant creature like me has the great fortune of living on a tiny sliver of space, in a tiny blip of time, and to play a role – however tiny and miniscule – in all this wonder fills me with an incredible awe and appreciation.

Famed astrophysicist Neil DeGrasse Tyson calls this ‘The Cosmic Experience’ in his recent book, Astrophysics for People in a Hurry.

“The cosmic perspective enables us to grasp, in the same thought, the large and the small.” Tyson writes. “I… think of people not as the masters of space and time but as participants in a great cosmic chain of being.” We are made of roughly the same stuff the most far distant stars and planets are made of: Carbon, Hydrogen, Oxygen and Nitrogen. These are the most common elements throughout the universe, and hence, “We do not simply live in this universe. The universe lives within us.”

No, the stars do not revolve around me. Neither do I revolve around them. Rather, we all revolve around the great scheme that is our universe. We are all part of this one grand play we have come to know as the cosmos. We, the human species, are both the actors and viewers of this play. We are both watching and participating in the dance of life from a convenient, far flung corner in the universe among trillions of stars and billions of galaxies.

That makes me feel very small.

Moshe Levy is a Hasidic writer living in Williamsburg.

What The Talmud Has To Say About The Stars