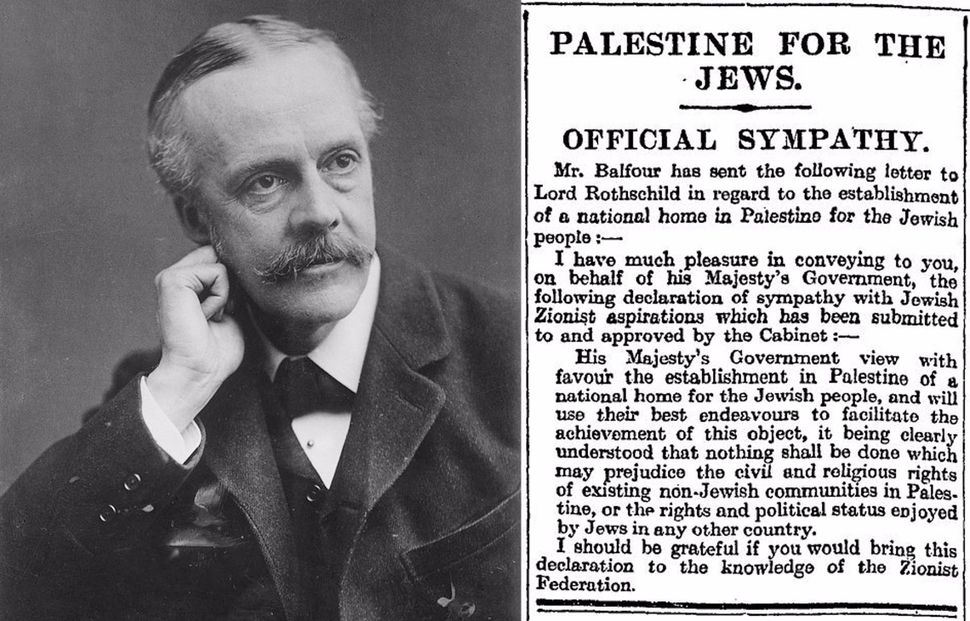 What all these milestones have in common, other than being key steps in the emergence and security of the Jewish state, is the connection of the modern state of Israel to the history of the Jewish people.

The Balfour Declaration, whose signing 100 years ago we commemorate on November 2, spoke to that connection at a critical juncture in the history of Israel.

Zionist leaders had failed until then to gain any recognition of the right of the Jewish people to a home in Palestine for 20 years since the official founding of the Zionist movement. This was true not only from the most important player, the Ottoman Empire, which controlled the Holy Land, but from other nations as well.

The fact that in November 1917 — as World War I still raged, and as the Ottomans still held Palestine — the British had now expressed support for a Jewish home in Palestine was an incredible breakthrough in itself. It took on far greater meaning when, shortly thereafter, British expeditionary forces defeated the Turks and took over Palestine.

From then on, relations between the British as the mandated power in Palestine and the Zionist movement were rocky. Nevertheless, the Balfour Declaration was on the books and changed the dynamics of Zionism forever. It gave a great boost in confidence to Zionist leaders that Theodore Herzl’s dream could become a reality and was the lodestar for the movement until the U.N. resolution of 1947.

What was so significant about the Declaration was not only that it came from the Foreign Minister of a great power but that it was directed in a letter to the head of the British Zionist movement, Lord Rothschild.

The essence of Zionism was what the land of Israel meant to the Jewish people. This support of the legitimacy of the Zionist concept and the transmission to the nation’s Zionist leader were inherently recognitions that the Jewish claim to Israel was different – it did not fit the patterns of colonialism — that it was based on a fundamental right linked to the 3,000-year history connecting the Jewish people to the land.

This insight took on greater meaning as anti-colonialist sentiment grew, particularly after World War II. Even today, enemies of Israel often focus their hostility to the Jewish state on the spurious claim that Israel is just one more alien colonialist entity imposed on regions of the world by Western colonialist powers.

This is what is behind the almost laughable effort earlier this year by Mahmoud Abbas, President of the Palestinian Authority, calling on the British to apologize for the Balfour Declaration.

Abbas got it right in two senses. First, he understood how important the Declaration was in the eventual founding of the state.

Second, he understood (and rejected) the underlying theme of the Declaration, that the Jewish people had a right to establish a home there based on their history which cannot be understood, whether in the founding of the nation or in its survival in exile for 2,000 years, without understanding the link to Israel.

It is no accident that the Palestinians, time and again, reject the Jewish historical narrative because they know their case for why Israel shouldn’t exist is only persuasive if one can make it seem that the Jews were merely outside intruders into the region.

And so we come back to celebrating the Balfour Declaration. It gave legitimacy to establishing a Jewish home and it reinforced the well-known relationship of the Jewish people to the land. When the U.N. decided in 1947 to partition Palestine into two nation-states, a Jewish one and an Arab one, it reflected both aspects of the Declaration.

At the same time, it should be noted that there is nothing inherent in hailing the Declaration that leads to rejecting a solution for the Palestinian problem. Without getting into a competition of competing narratives, suffice it to say that there is room for self-determination of the Jewish people as well as the same for the Palestinians within the land. Indeed, the partition resolution of 1947 provided for both and would have happened if not for the rejection by the Palestinians of the resolution and the consequences of their failed war against the new state of Israel.

In the long run, we can only hope that the Balfour Declaration will not be only a source for celebration for Jews and condemnation for Palestinians, but will be recognized as an important but not sole step in the evolution of the Holy Land, where two peoples could find their national expressions living in peace and security.