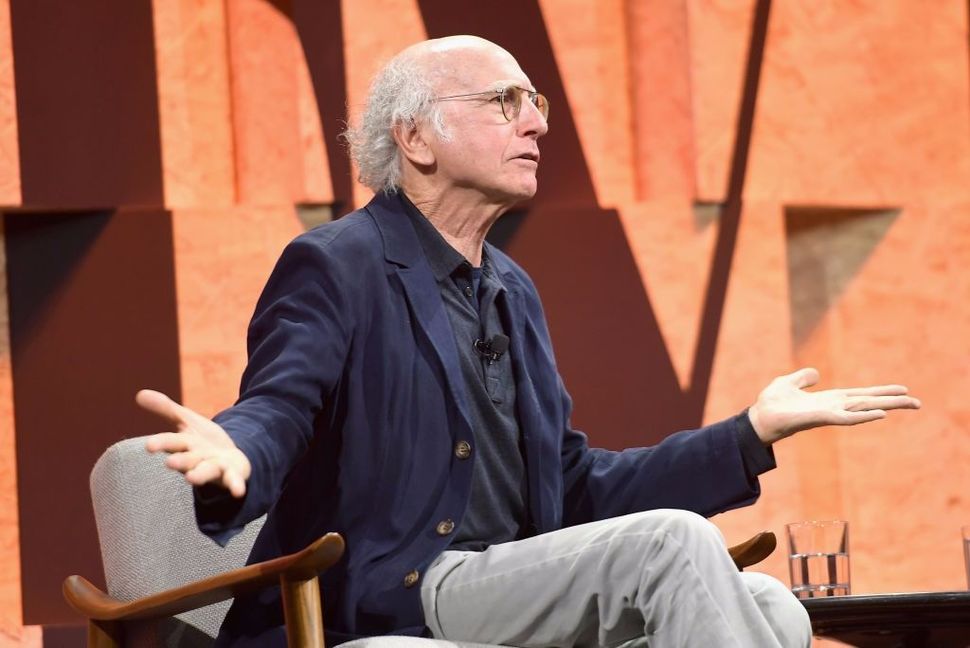 A different version of this essay appeared in the blog Martini Judaism: for those who want to be shaken and stirred, published Religion News Service.

What is the sound of America cringing?

Let’s get clear on something: over the past month, SNL has had two Jewish hosts. That might be unprecedented.

Yet, while Israeli superstar Gal Gadot filled the Jews with pride, especially with her Hebrew shout-out, Larry David successfully pushed every Jewish button.

First: Larry told us how embarrassed he is, as a Jew, that so many of the men who have been accused of sexual harassment happen to be Jewish.

It felt like a flashback to an earlier generation’s fevered whisper: “What will the goyim say?”

“The problem is,” he tried to quip, “there are no good opening lines in a concentration camp…”How’s it going? They treating you OK? You know, if we ever get out of here, I’d love to take you out for some latkes. You like latkes?”

How bad was Larry David’s performance?

Let’s put it this way: Lorne Michaels, SNL’s producer, could do worse than take over the cold open next Saturday night, and offer a public apology.

Let’s consider the second shtick first — the one about sex during the Holocaust.

Was there, in fact, consensual sexual sex in the concentration camps?

It is hard to imagine that such opportunities would have existed.

But, after the war? Absolutely.

The greatest baby boom in Jewish history happened right after the liberation of the camps. In the Displaced Persons’ camps, men and women met, fell in love, and had children. Sex and fertility was the ultimate affirmation of life.

When you think about it, Larry David has been leading us to this moment for decades.

Remember the famous “Seinfeld” episode — “The Raincoats.” It is otherwise known as the “making out during ‘Schindler’s List’ episode.

Newman, the loathsome mailman, spies Jerry making out with his (kashrut-observing) girlfriend, Rachel, in a movie theater during a showing of “Schindler’s List.” Newman self-righteously reports the incident to Jerry’s parents, who are horrified.

Larry David was one of the writers of that episode.

On one level, this was great social commentary.

People who are dating have been known to make out in a movie theater.

But, to do it during “Schindler’s List” seems wrong.

In religious terms, it was nothing less than a desecration of the holy.

And then, there was the famous “Survivor” episode of Larry David’s HBO series, “Curb Your Enthusiasm.” A Holocaust survivor gets into an argument with a cast member of the “Survivor” reality show over “who is the ‘real’ survivor?” Who had it worse – an inmate in Auschwitz, or a healthy young man stranded in the Australian outback?

What was that episode teaching us? That the term “survivor” is in danger of losing its meaning — so that almost anyone can claim its sacred mantle.

What about the piece about the (perceived) prevalence of Jews among men accused of sexual harassment?

Here is what Larry David either does not know, or does not want to know.

Throughout history, anti-semites have imagined that Jewish men were either effeminate (and that they menstruated), or the opposite – that they were over-sexed, often portrayed with grotesquely enlarged genitalia.

To make men into the sexual Other – it’s an old trick, and it played again in anti-black discourse.

The Nazi propaganda master, Julius Streicher, editor of Der Sturmer, took this notion to the next demonic level – that Jewish men had abnormal sexual desires, which they directed against pure Aryan women.

True to the example of their literary ancestors, some anti-semitic web sites have made the same case — that Harvey Weinstein’s outsize sexual and power stuff is directly linked to his being Jewish.

At 11:35 pm this past Saturday night, Larry David handed an easy victory to the modern-day ideological descendants of Julius Streicher.

That is why Larry David’s opening monologue was not only tasteless.

It was not only unfunny.

With the preponderance of anti-semitism in this country, it was also dangerous.