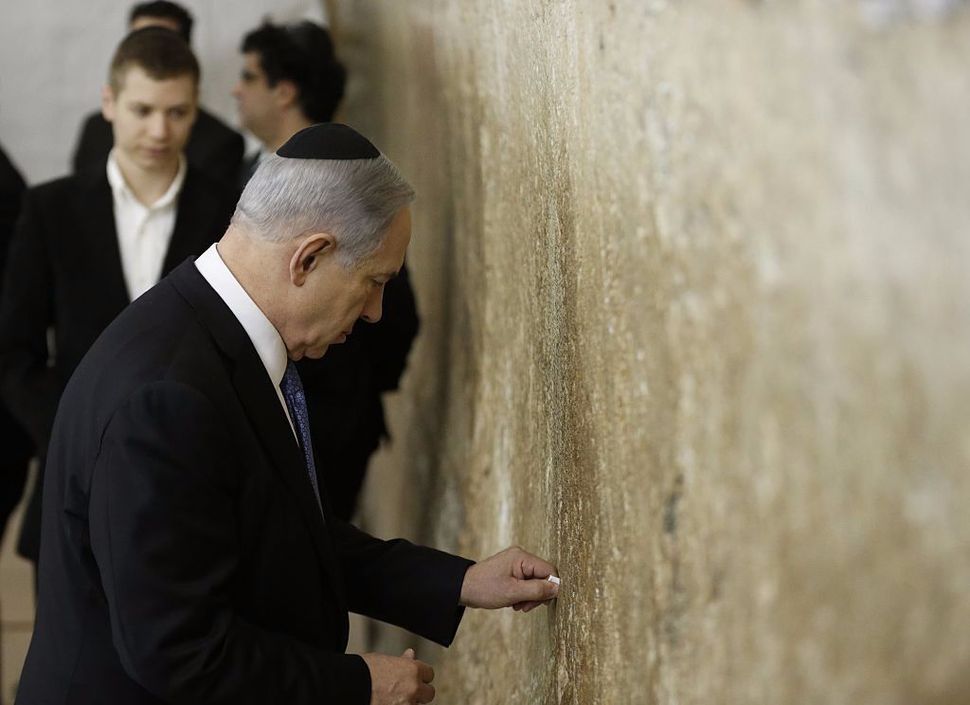 I heard Netanyahu’s remarks at the GA regarding the Kotel Agreement, and couldn’t believe my ears. Here’s the man who so faithfully catered to the ultra-Orthodox parties and their demands, that he has caused the greatest rift between Jews since the days of Bar-Kokhba. And there he sits in his office, a photo of his wife and kids to his right and the Israeli flag to his left, saying “I believe that Israel is the home of all Jews, and that all Jews should have access and prayer in the Kotel.”

Here’s a newsflash, Mr. Prime Minister: we don’t. As non-Orthodox Jews we have access to a plywood platform that doesn’t touch the Wall, and a tiny deck, no bigger than your utility room that actually reaches the Kotel. Ezrat Israel, this “pluralistic prayer space in the Western Wall” that exists “for nearly 20 years,” as you said, has limited access through meandering stairs, no restrooms and no chairs. It was built, according to Minister of Diaspora Affairs, hastily, in the middle of the night. “The 2016 decision wasn’t to create a space,” you said, “it was to improve the existing space.” but this is a gross misrepresentation, bordering on deception.

We did not negotiate with your government for three years about some minor landscaping improvements. They will not answer the legitimate basic foundations of equality. Our discussion were far deeper than that.

We remember insisting on a common entrance to all prayer spaces, including the egalitarian one. An entrance which would welcome all Jews and respectfully allow them to choose where to pray. Not an “improved” temporary stage that houses second-class Jews like the back of the buss.

We remember negotiating a separate governing body, independent of the Kotel Rabbi and the Western Wall Heritage Foundation, so the egalitarian space would be managed by representatives of the people who would actually pray there. Where mothers can share the joy of their sons’ Bar-Mitzvahs and fathers their daughters’ Bat-Mitzvahs. Where families can feel united. Where all Jews, Mr. Prime Minister, can feel at home.

I was arrested at the Kotel, the place in which you say all Jews should feel welcome. I was handcuffed, interrogated and brought before a judge for the crime of being a woman and reading Torah at the Western Wall. Please don’t try to minimize my experiences, as well as my friends’, by downplaying our concerns. Don’t patronize us with remodeling.

Instead, be the leader all Jews expect you to be. Own this crisis and work to mend the rift. Honor the Kotel Agreement. Respect us in actions, not just in words. Don’t take us for fools who would settle for a cosmetic upgrade.

I heard from one of your close advisers that you are very aware of legacy, while most of your opponents believe you only care about your seat. Here’s your opportunity for a great legacy. Generations of Jews could sing your praise as the one who initiated the Kotel Agreement, and executed it. Here’s your chance to unite, rather than divide. Take it.