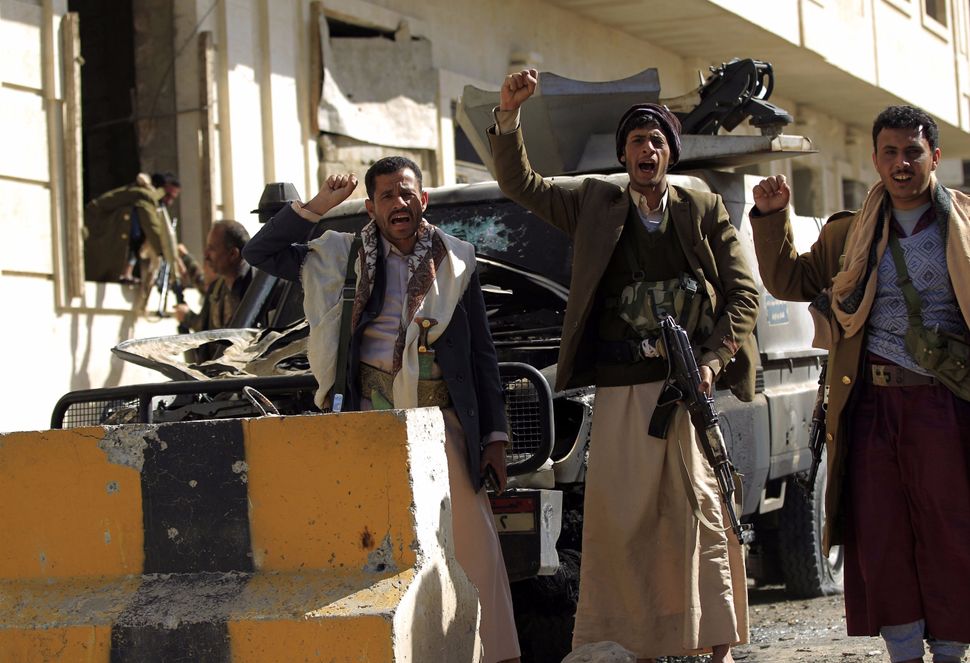 Like many American Jews steeped since childhood in the ethos of “Never Again,” I have always been haunted by the question of what I would have done if I had lived in Europe in the 1930s, on the cusp of that unfathomable horror.

Today we may have a chance to understand.

In Yemen seven million people could starve to death in the coming months. 21 million, fully 70% of the country’s population, cannot feed themselves without humanitarian assistance. A Yemeni child dies of a preventable disease every ten minutes.

This is not the result of a drought or a crop failure. This famine is manufactured by America’s close ally, Saudi Arabia, with bombs and blockade. For three years our country has contributed to this outrage by selling arms to the Saudis and their allies, by refueling their jets, by protecting them from UN inquiries. While simultaneously providing Yemen with hundreds of millions of dollars’ worth of humanitarian aid, our leaders have remained silent on America’s role in creating this very crisis.

Willful ignorance, indifference to suffering, indulging the cruelty of the powerful against the helpless. None of these acts make any sense in the Jewish moral universe, nor in the values of Americans. Yet for three years they have been done in our name, day after day.

In the past weeks this crisis has intensified. The Houthi rebels, who ousted the president and seized control of Yemen in 2015, fired a rocket at the Riyadh airport in Saudi Arabia. This was a reckless and provocative act, but the Saudi’s answer is unimaginably worse: they tightened their already severe restrictions on food imports into a full land, air and sea blockade of Yemen. The United Nations and leading humanitarian organizations immediately raised the alarm that the small stocks of food and medicine in the country would be quickly exhausted, putting millions of lives at risk. Under international pressure the Saudis re-opened a few ports, but have left the largest closed. On November 11 they bombed the only airport in Yemen that could accept humanitarian aid flights out of commission.

Humanitarian workers in Yemen give their estimates of how many innocent people could die as a result of this blockade. By the time our communities gather to celebrate the Festival of Lights, 50,000 Yemeni children could starve to death. By Purim – 150,000. Their parents, their grandparents, they too will be consumed.

It is impossible to discuss the Yemen crisis and speak only of the violence the Saudis are inflicting on civilians. We must not endorse or whitewash the Houthi rebels, who shell residential neighborhoods, kidnap and execute child soldiers. We should not let Iran off the hook for sending them arms and trainers. The true scale of Iranian involvement is debatable and there are signs it is exaggerated by the Saudis to increase American support. But even if it isn’t and the Houthis are a pure Iranian proxy, in what moral reckoning does that justify starving all the Yemenis around them to death?

I am extremely reluctant to equate any modern event to the Holocaust. But today I believe it is appropriate: the number of Yemeni lives that could be lost in the coming months is entirely comparable. Beyond the sheer numbers, the cruelty and indifference which with Yemenis are being starved also invokes the horrors of the Shoah.

So here we are, as Americans and Jews, on the edge of the abyss. What will we do today?

Unlike Jews in the 1930s (or, for that matter, Germans) we face no risk of death if we speak up. It is not fear that silences us, but indifference.

So the first thing that we must do is activate the empathy and compassion at the heart of our moral tradition and SPEAK for Yemenis. Give testimony. Give ourselves, our neighbors and our leaders no chance to turn their eyes away.

For immediate impact we can call on our members of Congress. Tell them we expect them to introduce and support legislation to end US military support for the Saudi military operation in Yemen, an immediate end to the humanitarian blockade and a dramatic increase in US funding for emergency assistance. You can sign our petition to that effect.

Speak in a way commensurate to your influence and access. If what you can do is call or email our senators’ offices and leave a message, or sign a petition, do that. If you can reach a senator with a personal call, if there are office doors in Washington that open when you knock, then in G-d’s name do that.

And our testimony should not only be to our leaders, but to our neighbors as well. You can inform yourself at places like the Yemen Peace Project at The Guardian. A wealth of analysis and journalism is at hand to help us understand the contours of this atrocity.

Speaking up is only a first step. Beyond it is the long process of self-inquiry, to root out how our system became one that could quietly facilitate such an outrage. But today, RIGHT NOW, we must speak.

Every day, every hour counts for the people of Yemen.

Brian Milakovsky is from Maine and presently works for a humanitarian organization in eastern Ukraine. He has written about the Ukraine and Yemen crises for Fair Observer, The National Interest and OpenDemocracy Russia.