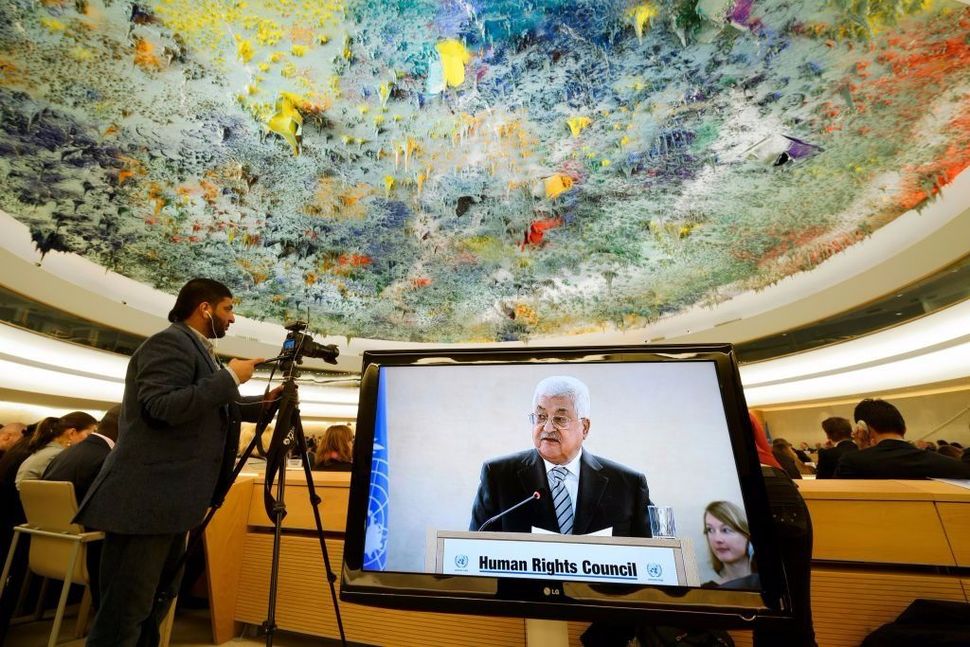 It is this time of the year again.

The victims of human rights violations in the world must be sighing in relief at this good news. Finally, maybe, their screams of anguish will be heard, and the Declaration of Human Rights’ truly noble call for “equal dignity and worth of every person” will become reality and ease their suffering.

Regrettably, they shouldn’t get their hopes up too high; the UNHCR fails to heed their plight: the organization is too busy coordinating efforts to denounce Israel. In the nine years of its existence, the UNHRC has condemned Israel more times than the rest of the world combined, revealed UN Watch. The total number of all other UNHRC condemnatory resolutions for the rest of the world amounts to 55, and most of the worst violators are given a free pass, if not a seat on the council itself.

Consider for example the candidature for election of 15 new members to the U.N. Human Rights Council. These candidates must meet the membership criteria established by UNGA Resolution 60/251, which requires member countries to “uphold the highest standards in the promotion and protection of human rights” and to “fully cooperate with the Council.” Angola, Democratic Republic of the Congo (DRC), Nigeria and Senegal were elected from the Africa group. Afghanistan, Malaysia, Pakistan and Qatar were elected from the Asian group. To cite just one example of abuse originating from the DCR; it has been designated the rape capital of the world.

And, adding insult to injury, the UNHRC ’s vetting committee has shortlisted a UK professor for a 6-year term as the world body’s investigator of “Israel’s violations,” even though she campaigns for the boycott of what she calls “apartheid Israel” and a “criminal government,” revealed UN Watch in a new report, entitled “Mandate to Discriminate,” which was submitted to the president of the 47-nation UNHRC, and to all UN member states.

This is a travesty of moral decency. The members and council heads of the UNHRC, who are the nastiest violators of their own population’s human rights, convene in the peaceful city of Geneva. There, they are wined and dined by royalty and officialdom, enjoy diplomatic immunities and privileges, all the while smiling at cocktail parties and flashy receptions busily deflecting their gross human rights violations by lambasting a common enemy, Israel.

Israel, one may argue, is not a perfect democracy. But the condemnatory voting patterns of the UNHRC does Israel a gross injustice. Israel is a diverse society, in which citizens of all political beliefs are represented. Israel’s Knesset is composed of 12 separate parliamentary groups, including both secular and religious parties from all sides of the political spectrum. With dozens of newspapers in many languages, Israel has a free, open and privately-owned press. Arab-Israelis are the largest minority group in Israel and are active in all facets of Israeli life, and have won as many as 12 of the 120 Knesset seats in a single election.

Christians in Israel make up 2.1 percent of the population and increased from 34,000 in 1948 to 154,000 in 2009. Israel is the only Middle Eastern country in which the Christian population has grown in the last half century.

This vibrant diversity cannot be accredited to most of the membership countries that constitute the UNHRC, while their citizens are subject to the worst form of human degradation, with no recourse to the rule of law and protection. The UNHRC embodies all that is wrong with the UN; a behemoth bureaucracy steered by an automatic majority of African and Muslim nations, who have kidnapped human rights in favor of leveraging political anti-Israel platforms.

The victims of human rights violations are in a tough spot. One can only hope for more civil society and human rights NGOs to muster the courage to confront the systemic and institutionalized injustice that lies at the core of the UN’s Human Rights Council.

In the meantime, I shall heed Eleanor Roosevelt’s advice that “it is better to light a candle than curse the darkness.” Let us hold up candles of human respect in the hope that the light will banish the darkness.