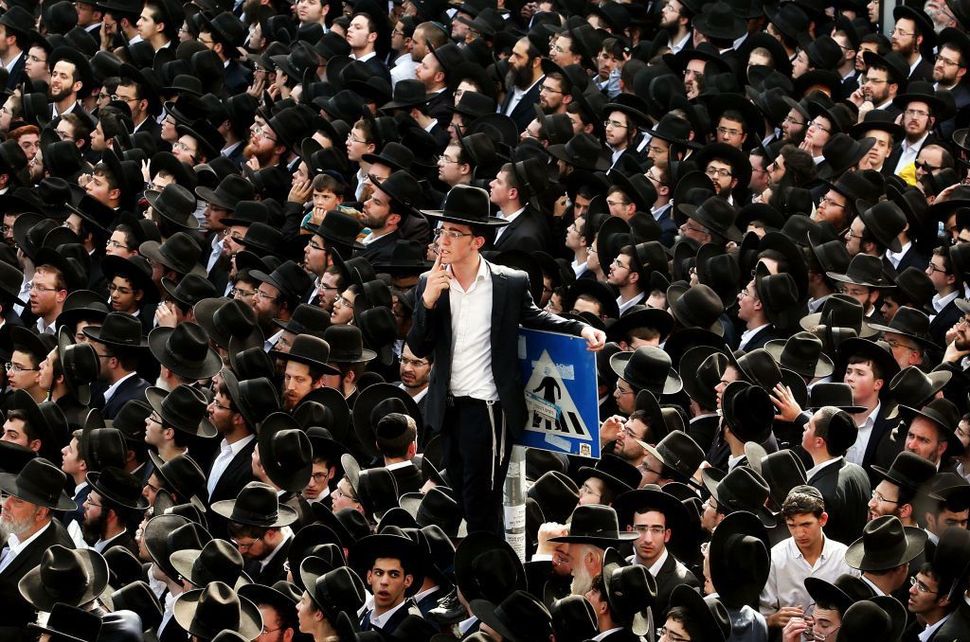 The recent Netflix documentary One of Us — which depicts the lives and tribulations of three Jews who are attempting to or have already left Hasidic Judaism — has led several commentators to reflect on the subject of those who leave the ultra-Orthodox community. One commentator, Anshel Pfeffer, who believes that there is currently a massive “exodus” from Haredi (ultra-Orthodox) Judaism which will reach into the “hundreds of thousands…over the next couple of decades,” urges “mainstream” Jewish communities to prepare for this deluge. Pfeffer states that “where mainstream [Jewish] communities have lost their vitality and are dwindling, [the ex-Haredim] have the power to rejuvenate Jewish life.”

The exact number of Haredi exiters is up for debate and there is insufficient data for strong conclusions. But unquestionably, ex-Haredim abound. And whether in future decades they come in droves or trickles out of Williamsburg, Crown Heights, Lakewood, and the like, I too believe they should be welcomed with open and sympathetic arms in whatever other streams of Judaism they seek to build new lives in. But Pfeffer’s suggestion that the exiters can “rejuvenate [mainstream] Jewish life,” is misguided in its assumptions about both exiters from ultra-Orthodox Judaism and about “mainstream Judaism.”

Are ex-Haredi Jews generally eager to join liberal synagogues and just waiting for a formal invitation? As it turns out, they’re not.

In 2015, I completed one of the largest sociological studies of ex-Haredim to date and one of the only to explore systematically the question of where exiters end up religiously post exit. I interviewed 75 ex-Haredim — 40 former Lubavitchers (23 men, 17 women), 35 former Satmars and members of Hasidic groups closely related to Satmar (22 men, 13 women). Only about one-third of those 75 ex-Haredim was involved in some liberal form of Judaism, or even supportive of liberal, modern movements as legitimate forms of Judaism. The nature of their interest in non-Haredi Jewish communities varied among the one-third who sought them out. Several women, for instance, valued singing in synagogue choirs or leading services, activities prohibited to them in their Haredi communities. A few men appreciated the ability to engage with classical Jewish sources without the ideological strictures of the Haredi approach to those texts.

But two-thirds, the majority of my sample, were either uninterested in, dismissive of, or even derisive towards liberal forms of Judaism. This is consistent with Mark Trencher’s 2016 survey of more than 650 ex-Haredim. Trencher, a market researcher, noted in the summary of his findings, “Very few [Haredi-exiters] labeled themselves as belonging to any of the typical Jewish world denominations.” (Incidentally, Trencher estimated that there were currently around 10,000 exiters from ultra-Orthodox Judaism, which would make Pfeffer’s projection of 300,000 in the coming decades unlikely at best.)

Five distinct reasons emerged in my research for the negative attitudes ex-Haredim have towards liberal Judaism. Some, after feeling alienated from and struggling within a religious community for years, were simply uninterested in joining another religious community—notwithstanding the vast differences between their former and potential future communities and the possibility that what made them feel alienated from their original community may not be present in the new one. Others felt that liberal forms of Judaism lacked the substance of rituals and beliefs constitutive of “Judaism.” Still others claimed that liberal Judaism suffered high rates of intermarriage and was unable to perpetuate itself, and was therefore illegitimate. Some held on to traditional gender roles and felt that women shouldn’t be rabbis and that they would be uncomfortable approaching female rabbis for guidance, making egalitarian Jewish communities an ill fit for them. Finally, some ex-Haredim held on to the ultra-Orthodox view that liberal Judaism was “inauthentic” and “fake.”

Exiters from Haredi Judaism don’t simply or completely jettison the attitudes of their upbringing regarding liberal Judaism, making the shidduch between the vast majority of ex-Haredim and mainstream Judaism anything but certain.

The ex-Haredim whom I interviewed were mostly between the ages of 18 and 40 and usually within 5 to 10 years of exiting their community. 48 of them were single and 19 were divorced. It is certainly possible that as time passes and their marital statuses change, they may rethink their relationship to liberal Judaism. But my study shows that we should not assume an automatic embrace of liberal Judaism on the part of ex-Haredim.

Pfeffer’s suggestion that ex-Haredim pursue liberal Judaism (which I am presuming is at least part of what he meant by “mainstream Judaism”) is a familiar one to many. But some ex-Haredim resent being urged by liberal Jews to remain connected to Judaism. This was my personal experience some 15 years ago after leaving the Lubavitch community in which I was raised. Although I am now a member of a Conservative Synagogue and attend Shabbat morning services regularly with my wife and children, I remember when I was in the process of leaving my Lubavitch upbringing having a particular encounter with the father of a new friend of mine. He was a Conservative Jew, a teacher in a Jewish day school, and had a strong personality. He tried to convince me to continue to put on tefillin daily even though I no longer believed in God. Beyond the irony of a Conservative Jew trying to convince a Lubavitcher to put on tefillin (how many Conservative Jews had I strapped tefillin on while standing on street corners asking strangers, “Are you Jewish?”), I strongly resented his interfering in my autonomy to decide how to live my religious life.

Pfeffer’s suggestion is problematic from a different angle as well. Pfeffer adopts a common perception that “mainstream Judaism” is stale and that its numbers are dwindling, and indeed many leaders among various Jewish groups have written and spoken in recent years about how to reinvigorate Judaism and synagogue life. But to assert that the answer lies in flooding liberal Judaism with ex-Haredim is patronizing at best. It assumes that liberal Judaism is simply a diluted form of Haredi Judaism. Pfeffer seems to believe its problems lie in just being overly diluted, and can therefore be solved by adding back a little more of the original, authentic Haredi Judaism, in this case by means of ex-Haredim, who carry with them just the right amount of Ur-Judaism, preserved in its fully authentic form back in the Haredi ghettos. Both historically and sociologically, this is an inaccurate and unhelpful view of modern and liberal Judaism, which intentionally and ideologically differs from and objects to key elements of Haredi Judaism. While “mainstream Judaism” should by all means embrace ex-Haredim, they should do so for the sake of the ex-Haredim and their wellbeing, not with ulterior motives for the rejuvenation of liberal Judaism.