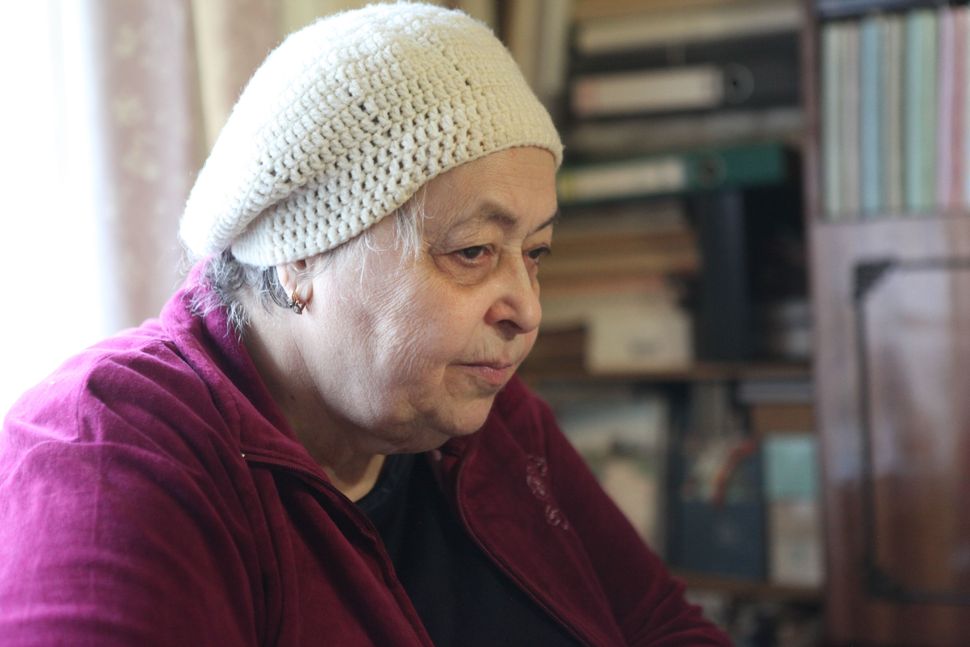 Image by Alex for JDC

In my travels, I’ve seen a lot: the last Jewish woman in a tiny Siberian village, fetching firewood by herself on a frigid February morning; fiercely talented Jewish children dancing in traditional Georgian costumes in the village of Gori, where Stalin was born; hundreds of teens from across the former Soviet Union coming together to sing Psalm 150 to the tune of Leonard Cohen’s “Hallelujah.”

Still, everywhere I go, there are constants — and one of them is courageous older women who remind me that Am Yisrael Chai, the Jewish people lives.

She wears many hats — former physicist, pensioner, erstwhile synagogue volunteer — but to hear this spitfire and consummate fighter tell it, what’s most important to her is her Judaism.

“Every day we say in our morning prayers: Blessed be you, O Lord, Ruler of the Universe, for creating me as a Jew. This isn’t just what’s written — it corresponds to reality,” she told me. “It’s precisely because of Jewish tradition that we have the ability to survive.”

Shmushkevich certainly doesn’t hide her Judaism, keeping her mezuzah, Chanukah menorah, and Shabbat candlesticks on full display, along with souvenir magnets from friends’ trips to Israel and the “Shalom Chaverim (Hello Friends)” sign in Cyrillic lettering inside of her home. Asya keeps strictly kosher, no small feat in Kharkov. Her homecare worker Lena buys meat from the city’s only synagogue’s small store and knows by now how to navigate the larger supermarkets to buy food that fits Shmushkevich’s dietary requirements.

Asya is one of some 110,000 vulnerable elderly Jews across the region helped by my organization, together with partners including the Claims Conference, International Fellowship of Christians and Jews, the Jewish Federations, and thousands of others. Without the food, medicine, homecare, and more that we provide, Asya, who has diabetes, isn’t sure she’d be able to get by. She knows her Jewishness connects her with a community that her neighbors don’t have.

“If the help wasn’t there, I doubt many of us would even have the ability to live at all,” she told me, matter-of-factly.

When I presented her with an “I Love New York” mug to thank her for her hospitality, Asya smiled and handed it quickly to Lena. It would have to go to the mikveh to be toyvelled, immersed ritually and made suitable for use in a kosher kitchen_, before Asya would dream of drinking tea from it.

It’s abundantly clear that Jewish observance and identity are important to Shmushkevich today— but what about during the Soviet era?

Shmushkevich worked for 40 years, depositing money each month into a government retirement fund that proved largely useless when the Soviet Union collapsed. Unmarried and with no relatives in Kharkov, she now survives on a meager $80 monthly pension, hardly more than $2 a day.

It was difficult to advance as a physicist during Soviet Times with such a Jewish name, she told me. If “Asya Shmushkevich” didn’t telegraph her status as “other” enough, her patronymic certainly did: Asya Israelovna.

She’d apply for jobs and be told by haughty hiring managers or even well-meaning mentors that, “There may be an open position here, but there’s no room for an Asya Shmushkevich.”

She told me how, worried about her career prospects, friends would tell her to adopt a fake name, at least for her job search: “Be Asya Igorovna, Asya Viktorovna, Asya Ivanovna, something simple, something easy, something Ukrainian.”

But she couldn’t be Igor’s daughter. Or Viktor’s. Or Ivan’s.

She stopped me in my tracks.

The people of Israel lives, yes, but what about Israel’s daughter? Are we really OK with her living like this?

Asya Israelovna never dropped us, never distanced herself from her Jewishness even when her whole world was screaming at her to do so. Against all odds, she kept her Jewish home.

Asya may have one father, but we, the people Israel, have tens of thousands of sons and daughters living across the former Soviet Union, struggling to get by, hoping that someone will remember them for life.

During Hanukkah, when Jews around the world celebrate miraculous abundance rising like a phoenix from scarcity and despair, it’s up to us to remember her and uphold our end of the bargain.