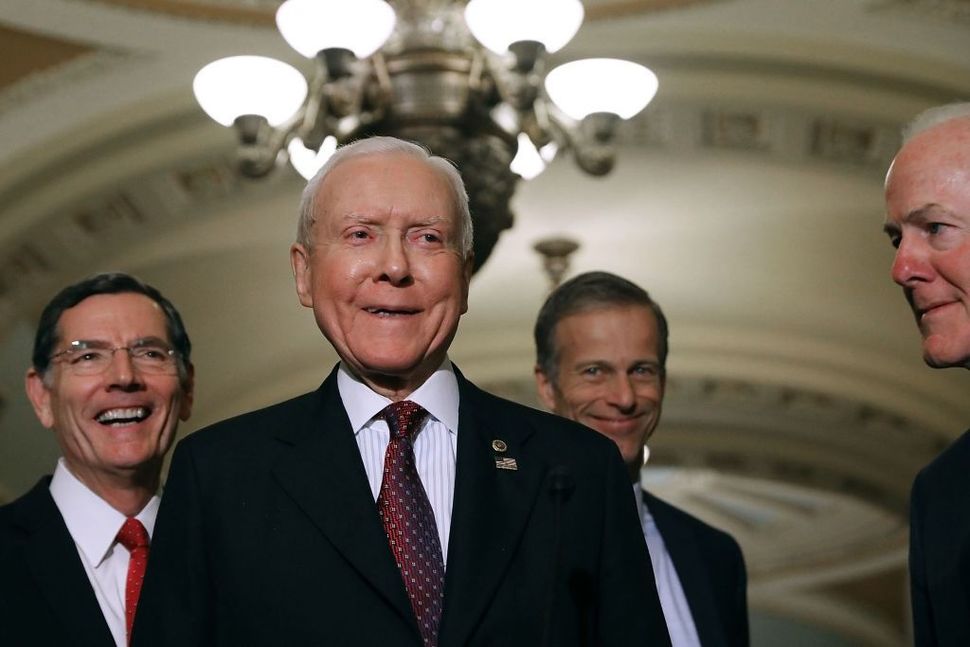 Since 1977, Senator Hatch has celebrated what he calls “the unique bond between our two nations,” cherishing Israel “as a free society and fellow democracy.” My family and I had the privilege of hosting the Senator when he last visited Israel in May 2016. His delight in having Shabbat dinner in Jerusalem was infectious. Displaying the mezuzah he wears around his neck, sending me scurrying for a Bible as he sought his favorite verse about Zion, smiling shyly when I asked him about the lovely Hanukkah song he wrote, he charmed us all.

Despite his lofty status, and a reputation for occasional ferocity in debates, he was soft-spoken and down-to-earth. As the evening ended, after chivalrously standing when my wife entered the room, and pulling out the chair for the woman dining beside him, he injected twenty-first century sensitivity into his nineteenth-century courtliness. He asked my daughters for permission before giving them warm but proper grandfatherly hugs. One of his themes that evening — and nearly every time he spoke about Israel — was that, as he wrote in 2015 in the Washington Times, “Partisanship mustn’t color America’s support for a strong ally.” Hatch is an unapologetic Republican partisan. But he appreciates that supporting Israel gives Americans an opportunity to demonstrate that key to a healthy democracy — that there are some issues on which left and right agree.

Hatch’s famous cross-the-aisle friendship with the Senator Ted Kennedy demonstrated that this sentiment, too, is heartfelt. Eulogizing his friend and rival friend in Newsweek nine years ago, Hatch confessed: “One of the reasons I ran for the senate was to fight Ted Kennedy, who embodied everything I felt was wrong with Washington.” Gradually, they found “common ground,” fighting for children’s health care, against AIDS, and to pass the Americans with Disabilities Act, among other joint ventures. Their working relationship then blossomed into friendship. When Hatch was dogged by false accusations, other colleagues distanced themselves until the cloud lifted. Ted Kennedy, however, called, sharing painful memories of his own media nightmares while exclaiming: “Ah, Orrin, everyone knows you did nothing wrong. Everything will work out.”

When Rose Kennedy died in January 1995, Hatch, a Mormon, quietly flew to Massachusetts and entered the cathedral, intending to sit in the back. The Kennedys insisted he join them up front, transcending their religious and political differences. Hatch’s career warns us about assuming that those who agree with us politically are good and those who dare disagree are evil. It reminds us to find points of contact with fellow Americans (and fellow Jews) — even when they err. It affirms Mayor Ed Koch’s line: “If you agree with me on nine out of twelve issues, vote for me. If you agree with me on twelve out of twelve issues, see a psychiatrist.” And it challenges us to fulfill the Jewish value of Hakarat Hatov, acknowledging the good, which also transcends party affiliation and does not require unanimity. In that spirit, the more liberal you are, the more you should follow these steps. Try liking this article. Then try tweeting “thank you for supporting Israel and championing bipartisanship” to @OrrinHatch. Then, stretch.

Try thanking Benjamin Netanyahu — even if you dislike him — for denouncing the totalitarian, theocratic, homophobic, sexist, anti-Semitic Iranian regime and supporting the Iranian people in what he called their “noble quest for freedom.” That should certainly not be a partisan flashpoint — liberals and conservatives should join together in opposing the regime and encouraging these heroic protestors. Then, for extra credit, try thanking Donald Trump, either for supporting the Iranian protestors, or, if you haven’t had a chance yet — for recognizing Jerusalem as Israel’s capital. Jews have long taught that menschlechkeit, behaving virtuously, is contagious. Good deeds trigger more good deeds. Senator Orrin Hatch deserves our thanks, expressed publicly and passionately, for four exemplary decades as a friend of Israel, a symbol of bipartisanship, and a true American Mensch.