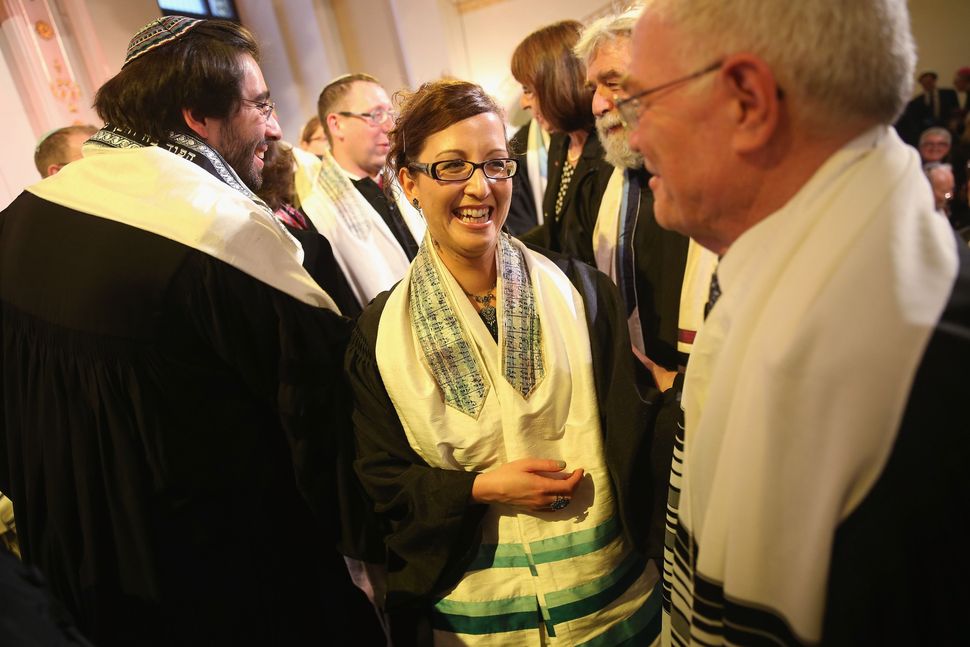 In the Jewish world, cantors are often regarded as second-class members of the clergy, if they are regarded as clergy at all. For a long time, the role of the cantor was a musician, a service-leader, and nothing more. While this is no longer the case, the stigma still exists, and female cantors tend to take the brunt of it.

Ordained cantors study for the same 5 rigorous years as our rabbinic counterparts. Our curriculum, while focusing a great deal on music, is not just about singing. We take classes in Talmud, in History, in Liturgy, in Pedagogy, in Pastoral Care, and so on. We write a research-based thesis and create an hour-long recital to go along with it. We write sermons, visit people in hospital, perform weddings and funerals, train our B’nai Mitzvah students, sit on interfaith councils, and so much more. Cantors can (and do) perform all of the legal functions of a rabbi. When I tell this to people, it is most often met with surprise and disbelief. Being a woman in this traditionally male role comes with a very steep upward climb for female cantors.

In my career thus far, I have been asked on countless occasions if I am the Rabbi’s wife, the Rabbi’s assistant, the Rabbi’s secretary, a Rabbi-in-training, and so on. I have had my appearance commented on more times than I care to remember. I have had my authority questioned, or blatantly ignored. I have been treated as though all I could possibly know about is music. I’ve also had my title disregarded over and over again. The use of the title “Cantor” for women is a triple challenge. Due to the perception of the status of a cantor, the perception of my age (people often assume that I am a good decade younger than I am), and my gender, many people feel as though they can just call me “Cheryl” in professional settings, without even asking what I prefer to be called. Many of my female colleagues have expressed that this is a problem for them as well. I have a hard time believing that our male rabbinic colleagues have this issue to the same degree.

I am often the first person to arrive at synagogue on a Saturday morning — and almost every time that there is a caterer there for the Bar or Bat Mitzvah, that person assumes that I am either the party planner or the caretaker — asking me where the extra tablecloths are stored and so on. I am happy to help and show them around the kitchen, but I don’t appreciate the assumption. When I ask people who come to or call the synagogue if I can help them, the response I get is often, “Oh. it’s ok. You probably can’t help me. I’ll wait.” I have stopped saying “I’m the cantor here. How can I help you?” and have started saying, “I’m one of the clergy here. How can I help you?” Once they get over their shock that this “cute little girl” speaking to them is clergy, I am usually able to help sort out whatever it is that they need. Even in written correspondence, the title “cantor” just doesn’t hold that much weight, so combined with a stereotypically female first name, the chances of my being taken seriously as an authority are very slim. I have removed my first name from all digital correspondence and have noticed a small, yet perceptible, improvement.

The utter shock that people display at my competence is disheartening. I have been told numerous times; “Not only did a cantor do the work of a rabbi so well, but one so young! So, when are you going to get ordained?” I am ordained, thank you. The idea that anything other than teaching music in religious school or leading a service is actually the rabbi’s work is infuriating at best and crippling at worst. I am currently serving a fantastic congregation on a part-time basis, and looking for additional work while holding the title of Cantor has seen many (most) doors shut in my face. Jewish organizations, including schools, university programs, etc. tend to advertise their jobs looking for a rabbi, and even when my experience and qualifications are equivalent or greater to that of a rabbi, I am typically not given a second glance. The title “cantor” on my resume almost immediately marks me as unqualified, and the rest of my accomplishments are overlooked. The image of the middle-aged male rabbi with a big bushy beard presiding over a Jewish organization has remained in the collective conscience, and a younger, female cantor stands little chance of breaking that concept — at least not without a significant fight.

Female cantors are also at a disadvantage financially. Our schooling costs more than our rabbinic classmates — we must purchase volumes and volumes of music, pay for accompanists, vocal coaches, studio time for audition CDs, and visits to the ENT to keep our voices healthy. Most congregations (not all, but a vast majority) pay their cantors lower wages than they pay their rabbis. When you factor in the unfortunate reality of the gender wage gap, well, you see where this is going. I am not saying that we are living below the poverty line by any means, but that there is a financial disparity.

There is a hierarchical ladder of Jewish clergy privilege, with male rabbis standing firmly at the top. Our female rabbinic colleagues have worked very hard to climb so many rungs of this ladder, yet I fear that they have not noticed their female clergy partners still standing so close to the bottom. I beg of my colleagues, especially my female rabbinic colleagues — as you are fighting for your own place at the table, please make sure that there is also a chair for us.

Cheryl Wunch is the Cantor at Shaarei-Beth El in Oakville, Ontario, Canada, and also does freelance cantorial work throughout the Greater Toronto Area. She can be reached through her website.