Are Jewish Students Left Out of the Left? 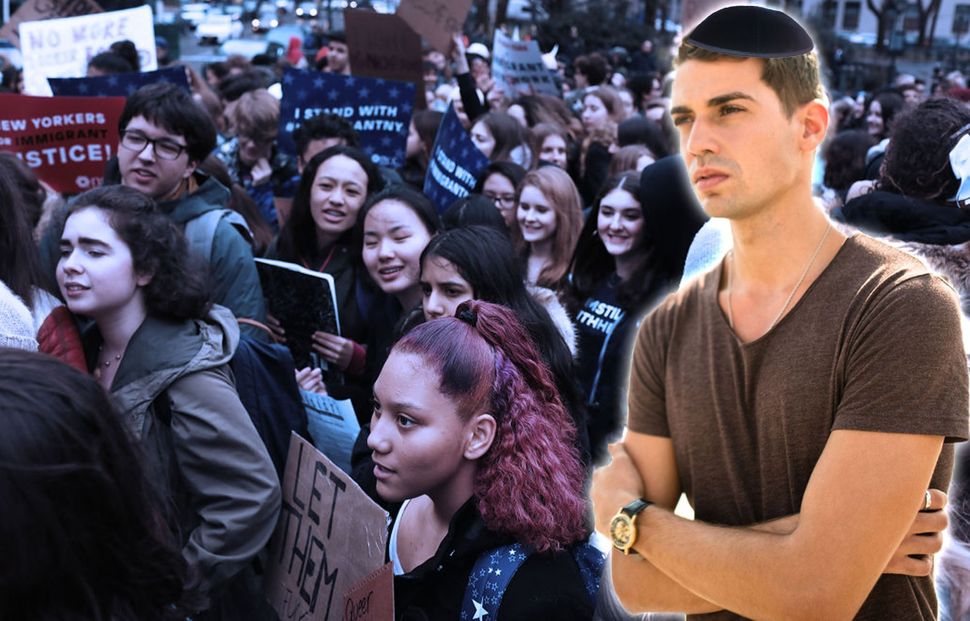 A version of this article appeared in New Voices.

When Jonathan Taubes was in high school, he read a lot of Noam Chomsky — so much so that Taubes and his friends jokingly refer to him as the Rebbe, or teacher. Chomsky, an American historian and social critic, writes about a diverse array of topics: Zionism, anti-Zionism, socialism and every other –ism imaginable.

As Taubes looked beyond his upbringing in the Modern Orthodox movement, he saw a kindred spirit in Chomsky, a left-wing Zionist youth organizer in the 1950s who pushed for a socialist binational state in Israel. Motivated by historic Jewish activists, Taubes was excited to take on social justice work when he went to Binghamton University. But Taubes found himself disillusioned by how Jews were discussed in his progressive circles.

For Taubes, this came to a head when a white supremacist neo-Nazi made disparaging remarks to nearby students. The statement released by progressive activists failed to include a Jewish perspective.

“The idea that Jews could also be threatened by Nazis — which, to me and to everyone who’d think about it, is obvious — that wasn’t mentioned anywhere in the response to this guy,” Taubes said.

When he tried to bring it up, he was halted by non-Jewish activists, who said he was a good ally, but nothing more. Eventually, Taubes, now a senior in college, said he drifted away from non-Jewish progressive spaces and now organizes within a Jewish framework at Binghamton.

Taubes isn’t the only student talking about – and facing – tough situations as a campus Jew on the left: Take one look at any Jewish newspaper or magazine and you’ll find article after article warning students about alleged anti-Semitism on campuses known for having liberal student bodies, like the University of California Berkeley and Oberlin College. The Anti-Defamation League (ADL), among other Jewish organizations, publishes annual reports focused on campus activism’s apparent anti-Semitic bent.

The real question is, are all of these people right? Are non-Jewish leftist spaces unwelcoming to Jews? Do Israel politics prevent Jewish students from participating in campus activism?

Aliza Lifshitz, a sophomore at Barnard College in New York, says no. Barnard is academically partnered with Columbia University, a school that consistently ranks at the top of those “Most Anti-Semitic Campuses” lists compiled by right-wing organizations (though it is ranked #9 in the Forward College Guide for Jewish Students).

“When I came to school, people were discouraging me from trying to get involved in activism, and even when I would tell people I was a gender studies major, they’d tell me it was a really anti-Israel department,” Lifshitz said.

She said a lot of her problems with progressive spaces came from her own struggle to reconcile progressivism and Zionism, not from non-Zionist students.

“I have not found leftist nationalist Zionist politics, ever. I’m not sure what that looks like,” Lifshitz said. “Zionism is a nationalist belief, so it doesn’t mesh. Ultimately my discomfort in [progressive] spaces stemmed from larger misalignments.”

Lifshitz said she believes a lot of the conversations around anti-Semitism on college campuses are just fear tactics, trying to pull students away from having honest conversations in progressive movements.

“A lot of the discourse around, ‘It’s really hard to get involved in activism at Columbia because of the Israel question’ reproduces that anxiety,” Lifshitz said. “When people tell Jewish students, ‘Don’t get involved in these things because there’s this one issue you disagree with,’ then the whole Jewish community is seen as not involved in these causes.”

Dov Waxman, a professor of political science, Israel studies and international affairs at Northeastern University in Boston, said the American Jewish community has ramped up fears of campus anti-Semitism too strongly.

“There may be a kernel of truth, but I think the degree of alarm and anxieties is grossly exaggerated,” Waxman said. “The idea that Jewish students on campus are cowering under their desks or in their dorm rooms, fearful of hordes of leftists who are anti-Semitic — it just doesn’t jibe with what I’ve heard from most students.”

Waxman, the author of the 2016 book “Trouble in the Tribe: The American Jewish Conflict over Israel,” said although he doesn’t believe every critique of Israel is anti-Semitic, he understands why some Jewish students perceive it that way.

Waxman also said he encourages students to form their own independent groups with their own activism goals, and resist the agendas of outside organizations, like Jewish Voice for Peace or CAMERA, that influence campus politics.

“I think, instead, the best responses are actually for students to get together and form their own kinds of initiatives and not be so ready to take the money or the things from the external groups,” Waxman said.

Lifshitz herself is the president of the Jewish Activist Collective, or JAC, the progressive political arm of their Hillel. They intentionally focus only on domestic issues, in order to prevent any conflicts between members.

She said, before she came to campus, a coalition of student activist groups, which included a BDS organization, released a statement of solidarity with each other, preventing any group from co-sponsoring an event with a Zionist organization. Regardless, Lifshitz said JAC still tries to bring progressivism and Jewishness together. They’ve held events with NARAL Pro-Choice, the pre-law program, and Columbia Democrats. Sometimes, as Northwestern University student Ross Krasner found, coalition activism isn’t so easy when Israel gets involved. Krasner, a former student government senator, had a more challenging experience when he tried to sponsor a resolution supporting students at the University of Missouri who were fighting racial injustice.

But when the Black Student Union on campus, who cosponsored the resolution, discovered that Krasner was active in Wildcats for Israel, the on-campus pro-Israel group, they told him they would remove BSU support from the resolution unless he removed his name.

“I was surprised,” Krasner said. “I’m not naive to the ways coalitions have been built in progressive circles, but to see it in action like that, it kind of surprised me.”

Krasner, now a senior, said he did remove his name because he cared about the resolution passing more than whether his name was on it. He still felt it had come up out of nowhere and calls it a learning experience.

“I thought we had a common cause,” Krasner said. “We were supporting racial injustice. I thought that was something we could do together.” Taubes, at Binghamton, said he also saw non-Jewish activists move away from him as he tried to discuss problems in their shared movements. “I found myself slowly but surely objecting to a lot of the ways that Jews were talked about, and Israel was conceived,” Taubes said. “A lot of this very problematic discourse, in a way, made me more defensive about my Judaism.”

Instead of feeling at home in non-Jewish progressivism, Taubes said he saw the same exclusion he felt from his Orthodox community when he began moving to the left. He still wasn’t left enough for the student movements at Binghamton.

“I am someone who literally is involved or has been to protests with IfNotNow, I’ve literally protested AIPAC with IfNotNow and had to deal with many of my Orthodox friends and relatives saying, ‘What the hell? You’re a traitor,’” Taubes said. “But even I was not good enough. My Israel politics were not pure enough.”

He said he sees the right-wing Jewish community and left-wing non-Jewish spaces operating the same way — both asking members to subscribe to a very specific strain of Zionism or anti-Zionism, and offering no middle ground.

“Instead of making you swear a loyalty oath to a certain kind of Zionism, [leftist spaces] make you do the opposite,” Taubes said. “A lot of progressive Jews I think don’t really have a space that they can feel welcome in, and that they can feel like they’re bringing their full selves to, without lying or hiding or covering up who they are.”

Waxman said, although he thinks most claims of campus anti-Semitism aren’t accurate, Taubes is right — the left has not done a good job of representing the Jewish experience.

“The honest critique is when we talk about any other group that claims victimhood, we’re very sensitive to their historical experience,” Waxman said. “The left celebrates the marginalized and the victimized, but it does seem to have this blind spot when it comes to Jews, to some extent.”

After his experience in student government, Krasner said he firmly believes in having tough conversations about fundamental disagreements before conflicts happen, so that when there’s a problem, a relationship already exists. Without that relationship, there’s no communication. “The time to have that conversation is not when crisis strikes,” Krasner said. “You want to be having the conversations beforehand — not to make everybody agree with you, but we might agree on this and we might disagree on this, but let’s work together on whatever we are confronted with right now.”

Krasner sees his Jewish identity as parallel to, but not overlapping with, his love for student government. He said he never brings his Israel beliefs into his work unless they come up.

“I like student government — it’s not because I’m carrying a pro-Israel agenda with me,” Krasner said. “If things come up, I’ll make that case and I’ll have these conversations, but for me it’s about just doing your job.”

Lifshitz, at Barnard, said her Jewish and progressive values are intertwined, and tries to apply her spirituality to her activism. “Where you put your body and where you use your body is part of how you express your values,” Lifshitz said. “Don’t just talk about how you support causes. Show your support. We don’t just say if someone believes in God, that they believe in God. They live their life according to that belief.”

She said this concept is especially important in racial justice organizing, where anti-Israel comments can often make Jewish students uncomfortable. But if students are uncomfortable, she encourages them to look past the one speech for Palestine and listen instead to the ones about racial injustice that came before it.

“‘Palestine to Mexico, those walls have got to go,’” Lifshitz said, referring to a chant she heard at the March for Racial Justice. “That was two minutes of a five-hour protest. If you really cared about these things, you’d show up.”

Taubes agrees. He said Jews can’t get stuck in the ‘us versus them’ mindset. Instead, they should stick to the causes they’re passionate about.

“Jews have to keep showing up in progressive spaces and not make the mistake of saying because there are problematic [things] in progressive movements, therefore, we should support Trump or go to the complete opposite side,” Taubes said.

Lifshitz acknowledges that she’s been cautious and often worried about being Jewish in non-Jewish leftist spaces, but she deeply believes that anxiety was given to her by the Jewish community itself.

“I would like to live in a world where people aren’t told before they get to college that you only need to remain within Jewish spaces to feel safe,” Lifshitz said. “If this is what you’re passionate about, then you have a right to be there, but you also have an obligation to listen.”

Are Jewish Students Left Out of the Left?