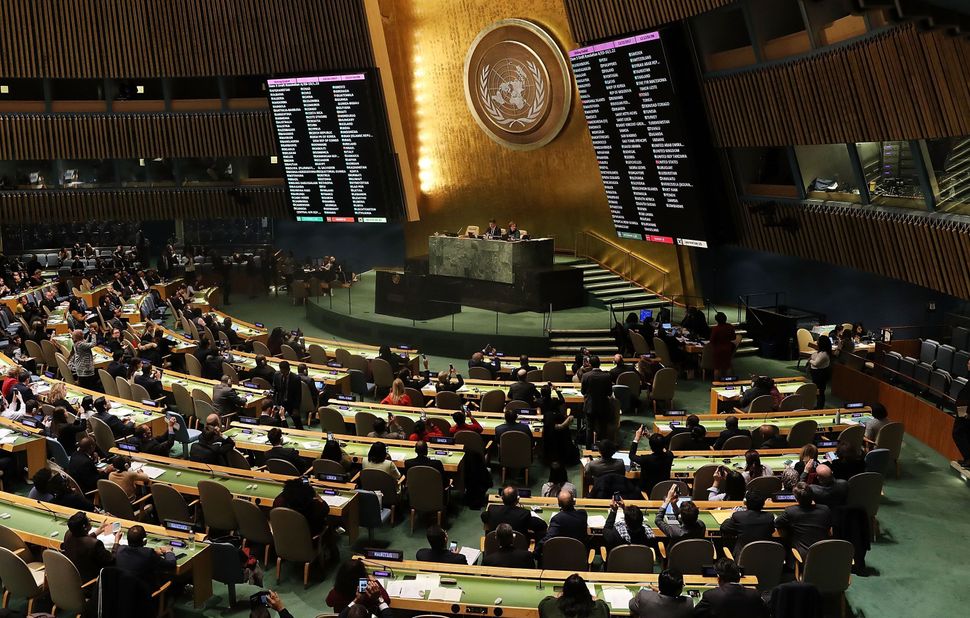 The voting results are displayed on the floor of the United Nations General Assembly in which the United States declaration of Jerusalem as Israel’s capital was declared ‘null and void’ on December 21, 2017 in New York City. The vote, 128-9, at the United Nations concerned Washington’s decision to recognize Jerusalem as Israel’s capital and relocate its embassy there. The Trump administration has threatened to take action against any country that votes against the United States decision to move its embassy. Image by Getty Images

Over the last 50 years, legitimate criticism of Israel has morphed into anti-Semitism a targeting that no other nation endures. Israel’s European friends have turned into adversaries, and even some American administrations have adopted a narrative in which Palestinians are always the victimized party. Heinous actions of violence, misogyny, and terrorism committed by other countries have no consequences, or are rationalized as being the only weapons available to the “victims.”

The weaponization of international law extends to the UN Human Rights Council, the World Health Organization and even UNICEF, which has used the information of anti-Israel NGOs to declare the IDF is a grave violator of children. Last year North Korea, a regime that is literally starving millions of its own citizens and threatening the world with a nuclear Holocaust, was the subject of only one UNGA resolution against it. Israel, in contrast, received 20 resolutions against it in 2017, and remains the all-time leader of UNGA resolutions against it — over 700!

Fortunately, having just returned from briefings and meetings with members of Congress, I can report that American leaders understand that the weaponization of international law against Israel not only undermines Israel, but also undermines American national security interests. 23 states have passed legislation against boycotting Israel. The bipartisan Taylor Force Act, named in honor of an off-duty U.S. Army Officer killed in Israel by Palestinian terrorists, demands that the Palestinian Authority stop spending American aid on rewarding its citizens and their families for committing acts of terrorism against Israel, or risk losing this aid.

A bipartisan American Congress is addressing the weaponization of international law against Israel with legislation that attempts to create a more balanced situation. While the international community is in no rush to sanction Iran, despite their growing human rights abuses, support of terrorism, and violations in missile development, Congress has approved legislation to sanction Iran’s proxy Hezbollah for its narco-terrorism, with bipartisan support. Meanwhile, the EU inexplicably refuses to designate Hezbollah in its entirety as a terrorist organization. This, too, is a weaponized international attack on Israel.

The European community is constantly feting the Iranians with promises of lucrative deals while focusing almost all of their energies on Israeli settlements, which in their view cause of all the world’s’ problems. Iran, a nation that the US State Department year-in and year-out certifies as the number one state sponsor of terror, had all of one UNGA resolution against it in 2017.

It may be unwise or even counterproductive for Israel to want to retain large segments of the West Bank, but according to a legitimate reading of international law, Israel does have legal rights over the Green line (i.e. 1967 border). This is incredibly important to acknowledge if you believe in two states for two peoples, because if Israel and the Palestinian Arabs ever agree to a territorial compromise, any land over the Green Line Israel retains in a land swap will become a pretext to undermine the deal in the future, as it would be considered stolen in the first place according that reading of international law.

This is all the more important after President Abbas again publicly declared that Jews have no connection to the land. His government maps never show Israel in any territorial dimension, and the incitement against Jews in his mosques, media, schools and government is unrelenting. The Palestinian people have been taught from early childhood that Zionism is an illegitimate movement with no basis in fact, and no Arab land can ever be given to an infidel.

When the Israeli-Palestinian conflict is rightly viewed by a world as a territorial issue, not an existential one, it will be readily solved — and bring with it a better life for the Palestinian Arab population.