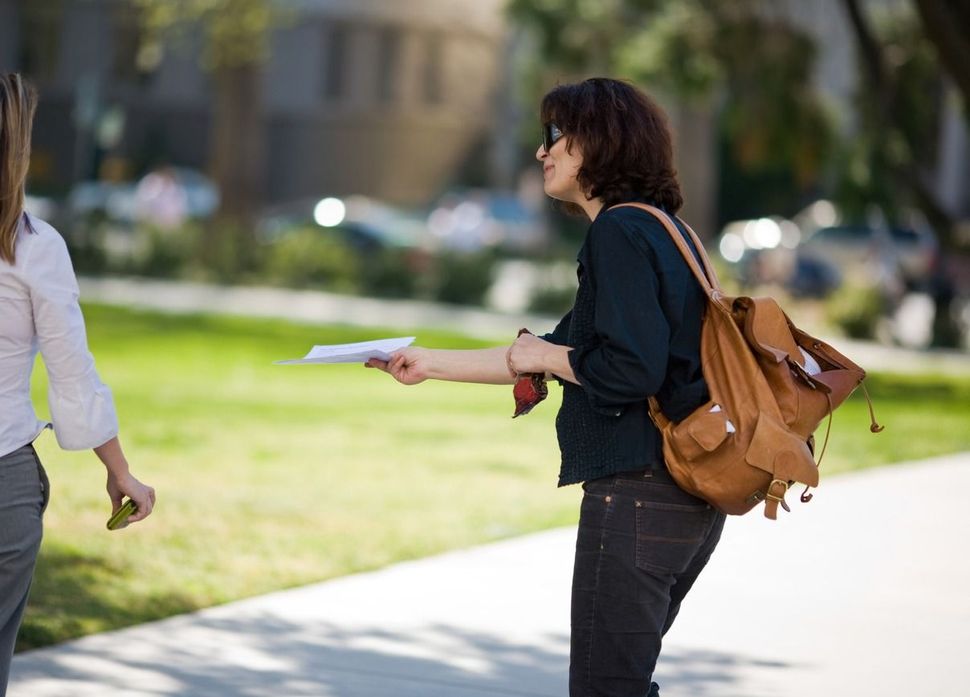 The local paper at the checkout line immediately caught my eye. My seemingly placid northern New Jersey town, Roseland, had erupted in Fury over a councilman, Thomas Tsilionis, who had exchanged vile texts with another council member, David Jacobs, in a group chat between the six city council members and the mayor. The texts contained crude, anti-black and anti-Semitic language. As I grabbed the paper to take a closer look, a stranger proceeded to berate it for reporting the story in the first place.

In the months that followed last year, I would try to figure out the answer to questions I never thought anyone in my family would ever have to ask again — at least, not in America. How do you respond to anti-Semitism when it’s in your own backyard? How do you convince others to fight it? What do you do when they don’t think it’s even a problem in the first place? How do you ultimately live with people you realize they might have ignored pogroms, lynchings and maybe even the Holocaust?

It’s Not That Easy

I always thought it would be easy to confront anti-Semitism. I envisioned people standing with me side by side as I demanded justice. Reality is often far different. The texts that Tsilionis sent were initially ignored by the public. They were later released to the press by another council member. In the days following the release of the texts, both council members agreed to resign. A few weeks later, they would decide to resign from the Republican party and keep their seats. During the course of a raucous council meeting, Tsilionis literally challenged the good people of the town to recall him.

Recalling a politician is so difficult in New Jersey that only four recall efforts have been successful. I thought it would be the easiest thing in the world to get signatures on a recall petition. The issue was clear cut: racial and ethnic slurs should have no place in our politics. His ill-considered comments also left the community open to potential lawsuits from Jews and African-Americans. But it wasn’t easy. Doors were slammed n my face. A neighbor I had known for years told me he was entitled to freedom of speech and ordered me to get lost in a loud and angry voice.

Online, things got even worse.

You May See It But Others Won’t

In the aftermath of the texting affair, council member Tsilionis continued to update his Facebook page with upcoming community affairs. When several of us asked him to keep his promise and resign, we were often attacked by others on the page in the most vulgar terms imaginable. This went on for months.

One August evening, I compared the council member’s remarks to the Nazi march in Charlottesville. One can hardly dispute that jokes about “cheap Jews” and allegedly over endowed African-American men are exactly the kind of jokes that Nazis and KKK members might make. I was insulted for hours on Facebook.

People told us it was a single mistake despite admissions by his friends that he uses such language all the time. My eldest daughter was bullied on the bus about being Jewish to the point that an official report was filed by the state on her behalf. When I wrote about my anguish at her hurt on the council member’s Facebook page, people came forward to tell me it was irrelevant and that everyone gets bullied.

At one point, Tsilionis even wrote to me:

“Stacey [sic] I never called you cheap. I used an innappropriate [sic] joke to a Jewish person in a joking manner (who laughed) and never had intent for public to see it.I am not sure who called you cheap but that wasn’t me.”

His inability or refusal to understand that to make jokes about cheap Jews is to call all Jews cheap was shared by many others in the community. What was crystal clear to me, and a significant minority in our community, was nothing at all to many other community members. We, rather than the council member, were accused of making the community look bad.

As Jews, we are a true minority. Outside of Israel and even places like New York and New Jersey, we are at best a small slice of the population. Fighting anti-Semitism requires allies. In standing up in my community, I was fortunate. I was not alone. Dozens of people joined me. Many of them were not Jews. Jew hating has to be seen as a part of a larger pattern. When people realize that people who hate Jews also probably hate them in some way, it becomes easier than ever to fight all forms of hatred.

We Jews are the canary in the coal mine. We need to help others understand that.

Be Prepared For Defeat

As of this writing, Tsilionis still holds public office. He may even run again and possibly even win. Similar stories have been told before and will be told again. Our petition to remove him from office was unsuccessful. He has gathered fierce allies around him and continued to speak in the voice of an elected official. To stand up is to prepare for the possibility that you may ultimately need to stand down. But it does not mean the effort was not worth it. There is deep satisfaction in the very act of standing up in the first place. Letting people know that bigotry will not remain ignored is crucial. It means that people may think twice before they use such language ever again. It may even mean that they finally realize that anti-Semitism is wrong.

Do It For Everyone Else … and For Yourself

Confronting bigotry isn’t just a job for Jews. It’s a job for all of humanity. The council member’s actions were condemned by just about every elected official in New Jersey. There is victory in that realization. There is also victory in knowing that you made your voice heard. It may be hard. It will be scary. But I assure you it will be worth it.

Stacy Mintzer Herlihy is a freelance writer. She is the co-author of, “Your Baby’s Best Shot: Why Vaccines are Safe and Save Lives,” {Roman & Littlefield paperback 2015). She is presently working on a second book on teens and smoking. Ms. Herlihy is a Reform Jew who lives in New Jersey with her two daughters and three very spoiled mush cats.