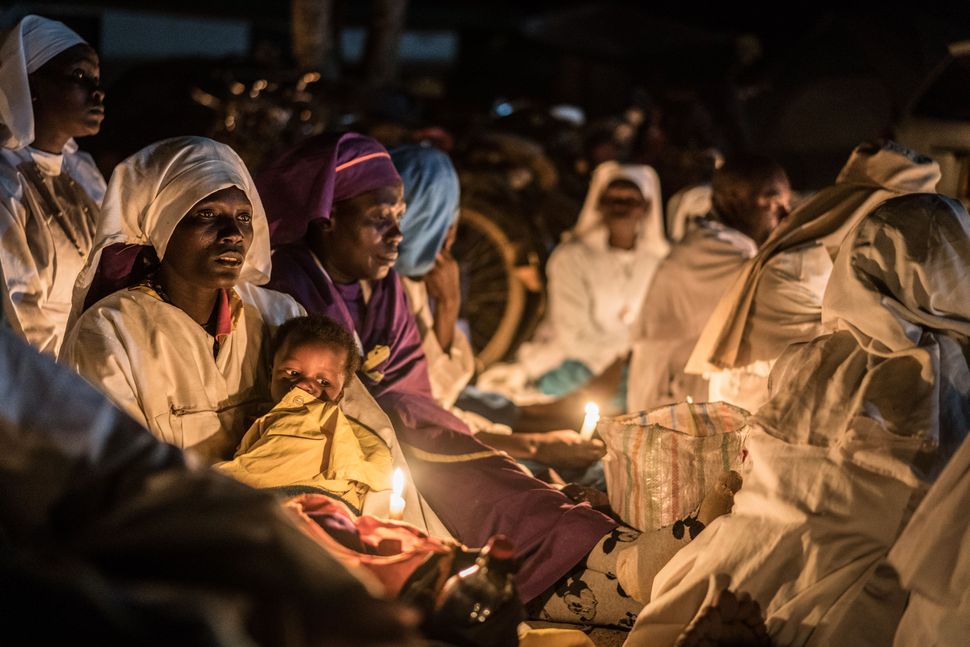 Believers of Legio Maria of African Church Mission hold candles during their overnight Christmas Mass at the church near Ugunja, the western part of Kenya, early December 25, 2017. Image by Getty Images

Kenya`s relationship with Israel was sealed in blood more than 40 years ago. In retaliation for providing critical support to Israel during the Entebbe rescue, Uganda killed hundreds of Kenyans. Many estimates place the number of Kenyans killed in retaliation higher than the number of hostages rescued in the historic raid.

Despite the extraordinary courage Kenya showed in risking a war and diplomatic isolation, despite the fact that Kenya is the highest recipient of U.S. Aid in Africa, and despite the unprecedented threats Kenya received from the United States, Kenya did not vote to recognize Jerusalem as the capital of Israel in the recent vote at the United Nations — because what or who could be more dangerous to a country than the risk of war?

Probably the most significant barrier Kenya would have faced in supporting the United States and Israel is its proposed membership in the Organisation of Islamic Cooperation (OIC). The OIC is the second largest intergovernmental organization in the world after the United Nations with a membership of 57 Muslim majority states, and Kenya has been attempting to join the group since 2011. Kenya`s membership will bind it according to the OIC Charter, which states that an aim is “…to support the struggle of the Palestinian people, who are presently under foreign occupation, … and to establish their sovereign state with Al-Quds Al-Sharif (Jerusalem) as its capital…”

OIC controls what Netanyahu told reporters in 2016 is the “… great blocking majority of 54 African countries that is the basis of the automatic majority against Israel in the UN and other international bodies.” He said his goal was to erode this majority. To accomplish this, Israel and her partners will need to aggressively support the African church, which is the foremost organisation that is challenging the OIC in Africa, through capacity building and technical assistance to do the following:

Challenge the political credibility of the OIC. Fouad Ajami, Co-Chair of the Hoover Institution’s Working Group on Islamism and the International Order at Stanford University writing for Foreign Affairs described the Middle East as “…a bleak landscape: terrible rulers, sullen populations, a terrorist fringe that hurled itself in frustration at an order bereft of any legitimacy.” He went on to write that “Arabs had started to feel they were cursed, doomed to despotism.” Challenge the financial credibility of Shariah Compliant Finance that is being used to pave the way to widen and strengthen this block. Timur Kuran is a Gorter and Family Professor of Islamic Studies at Duke University and a member of the World Economic Forum’s Arab World Council. Kuran has argued that contrary to its claims, Islam has no new, better or distinct economic philosophy to offer and that the purpose of Shariah Compliant Finance is to serve “the cause of global Islamism, known also as ‘Islamic fundamentalism,’ by fuelling the illusion that Muslim societies have lived, or can live, by distinct economic rules.” Challenge the legal credibility of the Islamisation of the laws and institutions of African countries by the OIC. In Kenya, Christians opposed the inclusion and funding of Sharia courts in the proposed constitution in the late 90s and sued the government for discrimination and a violation of the principle of a secular state. The court found in their favour but the country’s Christian political leaders sided with Muslim leaders in the subsequent constitutional referendum and overturned the court’s ruling.

Last year, some churches in Kenya spoke out again against the Islamisation of the financial sector and the government`s decision to join the OIC. They said, “The fear among Church leaders, therefore, is that whatever forces were behind the extensive Islamic provisions in the original constitutional draft, simply retreated, but are still determined to achieve the same objectives through legislation.”

In Nigeria, the churches have taken the President and government to court to challenge the involvement of the state with a religious organisation: the OIC. In November last year, Rev Dr Samson Ayokunle, the President of the Christian Association of Nigeria (CAN), called on the Nigerian parliament to consider withdrawing Nigeria´s membership from all OIC Islamic religious international organisations. In his remarks Ayokunle warned “Almost all the steps to be taken to Islamize Nigeria” by the OIC, had been completed “through the subtle actions of our rulers who were and are Muslims.” He also said that the Nigerian government had donated billions of naira to facilitate the Islamization Agenda.

In Uganda there was an uproar within the Muslim community when Christian leaders called for Uganda’s withdrawal from OIC in 2002. In January 2016, Uganda passed the Financial Institutions (Amendment) Bill 2015, to make its financial system Sharia compliant. The churches in Uganda responded forcefully as they could see its wider religious implications. In a letter to the President they urged him not to sign the Bill and said “We regret to note that the introduction of Sharia law in the country opens door to the ultimate operationalisation of fully-fledged Sharia not only in the finance sector as contained in the bill but in all aspects of our national life.”

In Tanzania, the strong resistance by the churches to a proposed membership of the OIC in 2008 seems to have stymied the government´s intentions for now. When the Minister for Foreign Affairs mooted the idea in October 2008, he was denounced by the Christian Council of Tanzania (CCT) which also called for his resignation.

The churches and Christians then constitute the biggest political bulwark against Islamisation and anti-Semitism in Africa. No church organisation however strong can defeat any Muslim cause in its country supported by the 57 member state OIC. The Israeli government, its partners and friends need to support the churches more substantially politically financially and technically in their advocacy projects. The forthcoming Africa-Israel Summit would be a good starting place to launch these initiatives.

Peter Anaminyi was National Director of the Far East Broadcasting Association (FEBA) Radio in Kenya for 10 years. He holds an MA from the University of Leeds, MSc in International Banking from Herriot Watt University and an MA in Forced Migration from Witwatersrand University in South Africa. He can be reached by email.