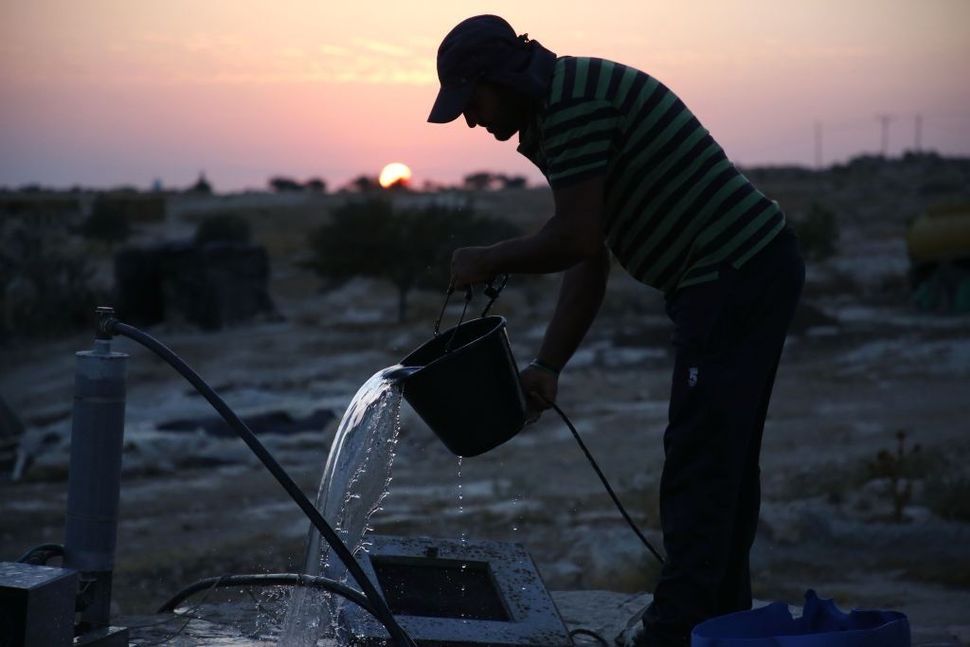 A Palestinian shepherd uses a bucket to get water from a well in the village of Susya south of the West Bank city of Hebron on August 19, 2017. Image by Getty Images

This past summer, as a J Street U intern in Israel, I visited two West Bank towns by the same name: the Palestinian village of Susya and the nearby Israeli settlement of Susya. I expected to see a disparity between them, but what I witnessed was shocking injustice. While the surrounding settlements and outposts were connected to the Israeli power grid and received military protection, the Palestinian residents relied on donated solar panels and water to help keep their community together.

To make matters worse, over 40 members of this community could soon lose their homes. On February 1, the Israeli Supreme Court decided to allow the immediate demolition of a portion of seven structures in the village. Due to the immense pressure exerted on the Israeli government by the pro-annexation movement, these Palestinians are denied the stability and security afforded to the Jewish residents of the nearby hilltop settlements. The presence of these Israeli enclaves in the West Bank, which often begin as just a few small structures, is illegal under international law, and in some cases under Israeli law, as well.

The Palestinian village of Susya lies in the South Hebron Hills, in Area C in the West Bank. A village of only 350 residents, Susya has been repeatedly under threat of demolition for the past 30 years, and has been demolished and rebuilt numerous times. The situation there is more than an injustice against Palestinians — it also shows the threat that the settlement movement poses to Israel’s future.

Proponents of settlement expansion have a strong vested interest in advocating for Susya’s demolition. If the civil administration continually denies permits to Palestinian villagers in Area C and periodically demolishes their homes, then settlements — like the Israeli settlement of Susya next to the Palestinian village of the same name — can expand and control more territory in the West Bank.

This is a phenomenon known as creeping annexation. It’s the Israeli right’s strategy to permanently entrench the Israeli presence in the West Bank, making a two-state solution impossible. In addition to the havoc it wreaks in the lives of Palestinians, creeping annexation threatens Israel’s long-term security. As Danny Yatom and Amnon Reshef, two former Israeli generals, wrote in the New York Times last week: “Even the most zealous legislators realize that absorbing all of the West Bank’s 2.7 million Palestinians would threaten Israel’s existence as a Jewish and democratic state.”

In many ways, Susya is ground-zero for the pro-annexation, one-state movement. Reacting to the Israeli Supreme Court’s decision to allow demolitions in Susya to proceed, Yishai Hamu, the operations director of the far-right group Regavim, urged the Israeli government to next demolish the entire village, and to “not submit to unacceptable external pressure” to prevent the demolition.

Hamu seems to be referring to efforts by pro-Israel Americans and Israeli security officials to preserve Israel as the democratic homeland of the Jewish people. Students, senators, rabbis and hundreds of former Israeli security leaders are speaking out against the expansion of settlements and in favor of a two-state solution. If Hamu gets his way, millions of Palestinians will suffer, and Israel’s future will be in serious jeopardy.

What’s really unacceptable is that we’re not seeing even more of this pressure — thanks to the new direction of US policy under President Trump. In years past, the US government would actively push back against actions by the Israelis or Palestinians which undermined prospects for a two-state solution. But as the Trump administration has refused to support the two-state solution or to publicly criticize settlement expansion, the Israeli right has felt emboldened to pursue demolitions and evictions of Palestinian communities across Area C of the West Bank, starting with Susya. By implicitly giving a green light to the demolitions in Susya, the Trump administration is putting Israel’s future as a democratic homeland, along with Palestinian communities, at risk.

Pro-Israel, pro-peace, anti-occupation Americans cannot stand idly by as more families are displaced from their homes. Nor can they remain silent as the Israeli right moves to make the occupation permanent and create a “one-state nightmare” of endless conflict and oppression.

Since the summer of 2016, J Street U has rallied support against the demolitions in the West Bank. Through petition drives, phonebanking to Israeli consulates, teach-ins at colleges and synagogues and fundraising for villages’ needs, we seek to make clear to American Jewish leaders and our elected officials that they must act.

With every new demolition, families are displaced. Conflict and despair are exacerbated. A two-state solution becomes harder to achieve. We must do everything we can to help stop this destructive pattern — while we still can.

Zachary Spitz is a University of Chicago undergraduate and a Midwest regional co-chair for J Street U.