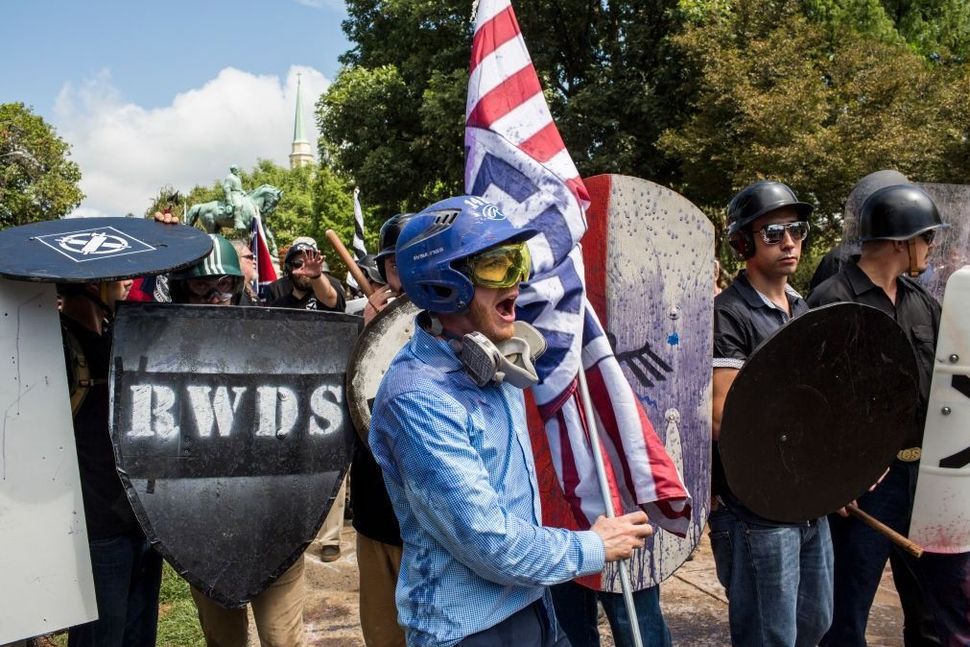 The news from Charlottesville came while I was at work. I couldn’t stop staring at my laptop, watching videos of neo-Nazis and white supremacists rampaging through the streets. As tears streamed down my face, I tried to cry quietly so as not to disturb my coworkers. How could I continue working as if nothing had happened? I felt as if I was witnessing a generation-defining moment. Charlottesville, however, was only one data point in a frightening trend: the emboldening of white supremacists and neo-Nazis.

In its annual analysis of hate crimes, the FBI found that the number of hate crimes rose by 5% in 2016. Hate crimes against Jews, who were more likely to be targeted on the basis of religion than any other group, rose by 3%, to 684 from 664. But Jews are not the only group targeted.

Hate crimes against Muslims jumped by a staggering 19% in 2016, at numbers second only to the wave of anti-Muslim hate crimes in the aftermath of 9/11. The National Coalition of Anti-Violence Programs has reported 26 murders of transgender and non-binary people in 2017, making it the deadliest year on record for murders based on gender identity. The majority of the victims were trans women of color. According to a survey by NPR, the Robert Wood Johnson Foundation, and the Harvard T.H. Chan School of Public Health, 57% of LGBTQ Americans reported that they’ve been called a slur based on their gender identity or sexual orientation.

As a Jewish activist, I have a responsibility to respond to hate crimes in a way that includes non-Jews who are victims of hate and Jews with marginalized identities, who are more likely to be targeted by bigots. In this political climate, solidarity between targeted groups is vitally important.

Believe it or not, fully 1,500 U.S. local law enforcement agencies did not participate in the FBI’s hate crimes data collection, and 88% of participating agencies claimed that not a single hate crime occurred in their jurisdiction, including major cities like Miami and Patterson, N.J. While it would be wonderful if hate crimes simply didn’t occur in these places, that’s highly unlikely. Some 30% of LGBTQ people of color in the NPR survey said that they would be afraid to call the police if they were the victim of a hate crime, and 25% said that police officers have personally discriminated against them. Many hate crimes are never reported or swept under the rug.

As an intern last semester with the National Council of Jewish Women, I worked with a partner organization that works to fill that gap — Communities Against Hate, an initiative which helps survivors and witnesses of hate incidents confidentially report crimes and find legal support. They encourage everyone who has witnessed or been involved in a hate incident to report it at communitiesagainsthate.org.

We cannot combat a problem that we cannot measure. Until there are better reporting procedures and more incentives to participate in the FBI’s hate crimes report, civil-society initiatives can fill in the gaps in the data and support victims of hate crimes.

Although the past few years have been frightening for American Jews, I have been heartened by the support of non-Jewish people and energized by the Jewish defense of other victims of hate. When hundreds of Jewish graves were vandalized in Pennsylvania last February, it was Muslim activists who raised thousands of dollars to restore them. When a small-town mosque in Texas burned down in a suspicious fire, the local temple and four churches gave the Muslim congregation space to worship alongside them. Jews, with or without other marginalized identities, must recognize that anti-Semitism is intertwined with racism, Islamophobia, homophobia, and transphobia, and we cannot uproot one problem without addressing them all.

The Charlottesville rally made me revisit a memory from my childhood. When I was 14, I was a classroom aide for the kindergarteners at my Hebrew school. One day, the teacher I worked with told me that there would be no recess that day, and that I shouldn’t even let the children walk past the playground after class let out. She explained that someone had put graffiti on the playground that no child should see. At the time, naively, I’d assumed it was profanity. Looking back, I’m sure it must have been something more sinister, like a swastika. It is an awful feeling to retroactively realize that you were less safe than you thought you were.

When I was a child, I used to love to sing the Hebrew hymn, “Look how good and pleasant it is when we dwell together in unity.” Seeing the solidarity between targeted groups makes me feel hopeful for the future. Hatred seeks to create division, and so Jews must seek justice for all, not just other Jews. I urge my fellow Jews to stand up against hatred of all kinds and spread the word about Communities Against Hate.

Nina Henry is an activist and student at Smith College.