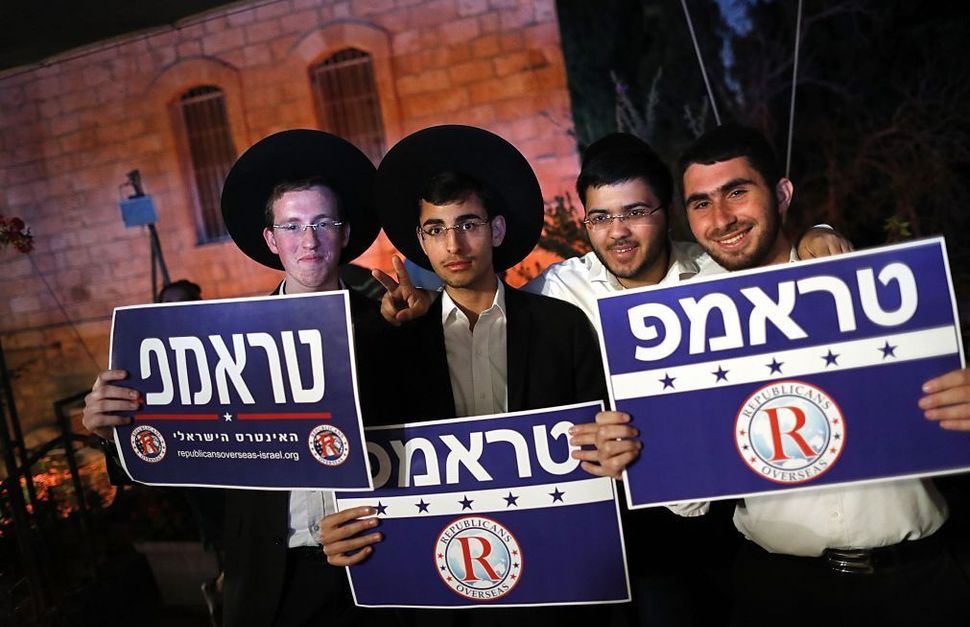 Jewish supporters of US republican presidential candidate Donald Trump hold placards in Hebrew showing support to their candidate during a pre-US elections rally organized by The Republican Overseas in Jerusalem. Image by Getty Images

Since November 2016, members of the media have been finding Nazis everywhere — even in seemingly impossible places. The latest example in the Forward was a piece by Elad Nehorai proclaiming that Orthodox Jews are embracing White Nationalist ideology.

Nehorai is a writer I have long respected and admired, both for his mastery of the craft and for his courage in tackling important, tough issues. But throughout the piece, Nehorai fails to prove his contentions beyond Facebook comments and shul whispers. In reality, the comments he recoils against seem to be reflexive tribalistic defenses of “Team Trump” rather than white nationalist statements.

The only hard evidence Nehorai cites to support his claim is that Orthodox Jews have increased their support of Trump since the election. But this evidence only supports his claim if supporting Trump makes you a white supremacist — and not, perhaps, someone happy that Trump recognized Jerusalem as Israel’s capital, freed Rubashkin, delivered on tax cuts or perhaps other policies one might be a fan of.

You don’t have to sell me on Trump’s flaws. Before he was elected, I felt he was a man of vile character, supremely unfit for the presidency and not worthy of my vote no matter who ran on the opposing ticket. Despite my satisfaction at some of the things he has done, I still feel the same way and don’t envision him being able to do anything to convince me otherwise.

But despite my personal disgust for Trump, plenty of people I know and respect do support him. Whether they voted for him or have come to support him based on recent actions, they are most definitely not white supremacists.

I live in the same neighborhood as Nehorai, I hear the same talk he does and I too am vocally anti-Trump (albeit without a hint of Nehorai’s following). Am I not hearing the white nationalist stuff because I embrace it, too?

Much of Nehorai’s entire thesis seems to be based on Trump’s infamous S-hole comment and the defenses of it from his Orthodox supporters. I am loathe to defend Trump’s disgusting comments. I found them abhorrent. But there is plenty of room for a nuanced conversation about them without either side being labeled Nazis or even racists.

Like two of the people quoted in Nehorai’s piece, I am a South African expat. As a dual American and South African citizen, I love both my countries deeply. South Africa is a stunningly beautiful place with incredible, warm and friendly people. It is blessed with gold and diamonds— both underground and within the hearts of its people. But ask many of the black people there how they would describe the country and you will hear similar words to what came out of Trump’s mouth.

Is the “language of the alt-right” infiltrating black South Africa?

South Africa is one of the most violent, dangerous places on earth. The president is corrupt. The murder of white farmers you scoffed at? It is a reality, not a racist KKK trope. It happened in Zimbabwe, and alarmingly to blacks and whites, it is happening now in South Africa, too. Emerging from the ruins of Apartheid, it will take the country a long while to get over these growing pains. Describing the state of a country doesn’t apportion blame or intimate racism.

I noticed the essay stopped inches short of actually calling the likes of Dennis Prager and Ben Shapiro racists, perhaps because such a grave accusation requires hard evidence. Nevertheless, there was no hesitation in tarnishing a “significant amount” of the Orthodox community. Perhaps some Orthodox Jews find kinship among Trump supporters more than among liberals because when faced with political disagreements they are called white supremacists. Maybe it is because criticism of Islamic anti-Semitism will get one labeled an Islamophobe by the same people who have no issue mocking and denigrating the Orthodox community.

The very same groups Nehorai praises for “stridently and bravely” condemning Trump are often silent when the bigotry emanates from the left, as in the case of Democratic Congressman Danny Davis buddying up to Louis Farrakhan. Apparently the condemnations are more partisan politics than strident bravery.

I agree wholeheartedly with Nehorai’s assertion that we must “reject hate, and guard against the dangers of racism, bigotry, and other white nationalist tendencies. We lose our Jewish soul if we embrace hate.”

But is not tarring 10 percent of the American Jewish population with the brush of white nationalism embracing a form a prejudice devoid of Jewish soul?