Why My Synagogue Is Taking A Pilgrimage To The Deep South 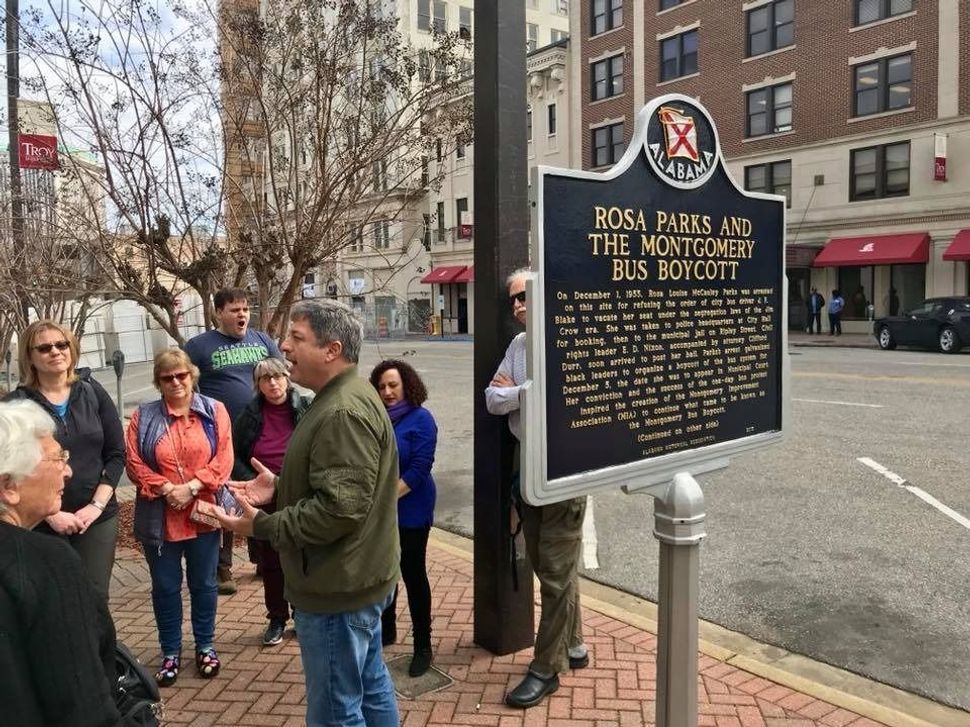 Temple Israel of Westchester beginning their pilgrimage to the deep south. Image by facebook

This week, a group from Temple Israel of Northern Westchester embarked on a civil rights pilgrimage to the South. We are visiting key historic sites in Atlanta, Birmingham, Montgomery, Selma and Memphis, hearing from people who were part of the struggle for justice and meeting with others who continue it today. Our goal is to better understand the Jewish response to civil rights history in the context of today.

Last spring, in Atlanta, standing in the sanctuary at The Temple with a group of Reform rabbis, I tried to imagine the devastation when fifty sticks of dynamite blew apart the side wall of the building in 1958. Then, it was known as Hebrew Benevolent Congregation. It had been bombed by white supremacists.

At the time, Pittsburgh native Jacob Rothschild, an outspoken opponent of racism and segregation, served as rabbi. His activism reminded me of Michael Robinson, a former rabbi of our congregation.

Rabbi Robinson had marched and was arrested with Dr. Martin Luther King. In 1963, after the bombing that killed four girls in their Birmingham church, he organized a civil rights fundraiser in our congregation. Some of the proceeds helped to purchase the car that civil rights activists Michael Schwerner, Andrew Goodman and James Chaney drove in Mississippi, where they were murdered the following summer.

Most congregants at Temple Israel supported Rabbi Robinson’s activism. Prior to Atlanta’s Temple bombing, Rabbi Rothschild did not enjoy such support. Many Southern Jews disliked “Yankee Jews” like the rabbi. They thought that Jews from the north did not understand Southern culture. They resented activists who came “down South” to demonstrate and then returned north, never having to live with the consequences. It was a complicated, divisive time.

Standing where Rabbi Rothschild stood in The Temple’s beautiful sanctuary, I tried to imagine myself in his place. Today we know how the work of civil rights activists brought voting rights and desegregation to the South. We admire their accomplishments and pay tribute to their sacrifices. Yet those who lived through this time had no idea what their struggles would achieve. They had no idea of the price they would pay for combatting racism and inequality. They must have had to overcome the same fear and uncertainty we feel today.

Ours is not merely a sightseeing tour. A pilgrimage is meant to change those who walk its path. We are learning by revisiting the time when activists like Rabbi Rothschild and Rabbi Robinson took part in unfolding history. Our pilgrimage is intended to help us better understand our time and the injustices that remain, to reflect on what we learn, and to contemplate how we can affect change. History is unfolding now, and we are a part of it.

Rabbi Jennifer Jaech is the senior rabbi of Temple Israel of Northern Westchester.

Why My Synagogue Is Taking A Pilgrimage To The Deep South