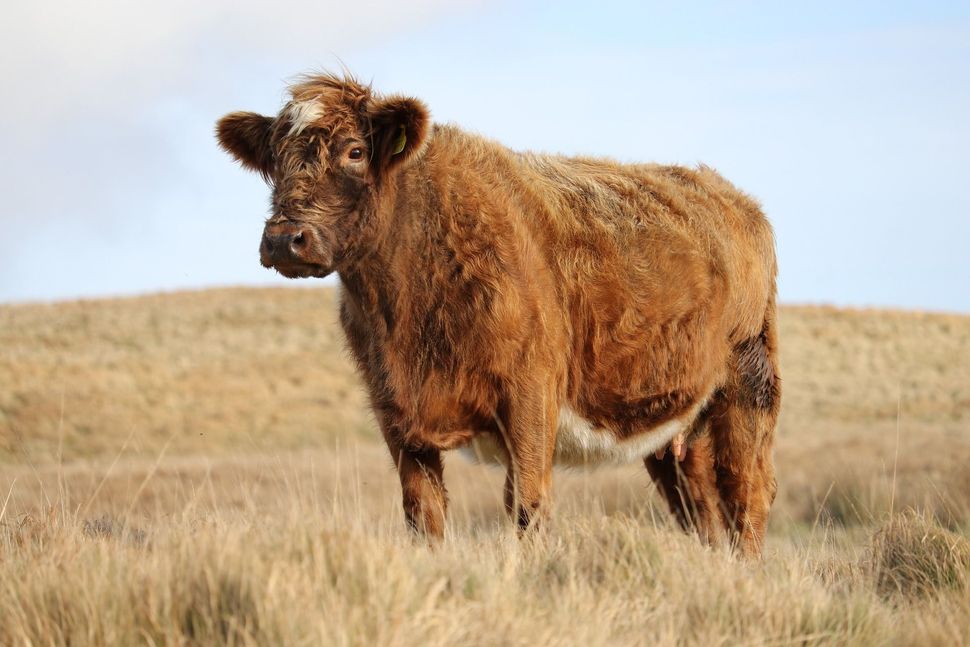 In Europe, my bubbe’s family owned a cow named Vashti. They were too poor to drink her milk or eat her cheese — this they sold to Jews more well-to-do than themselves — but they managed to subsist, from day to day, on the meager earnings derived from Vashti’s dairy products.

It was my bubbe’s job to walk Vashti to pasture in the morning and bring her home at day’s end. On those long and leisurely meanderings, she and her cow would stop to pick a flower or listen to the wind. Always, bubbe told me, Vashti knew to stop at the cheder, where Uncle Chaim was the lehrer (teacher). Vashti would wait respectfully, chewing her cud or the grass, while bubbe strained to hear a few words of the education that belonged to the boys in her shtetl.

At Purim, when we read the Megillah of Esther, my thoughts turn to bubbe and her cow. The irony of her family was that though they had a cow of their own, none of the children ever had milk to drink. The larger irony, however, was more profound: though Eastern European Jewry owned one of the most rich and compelling intellectual traditions, its women were starved. Burden bearers and child bearers, they were responsible for walking the cow to pasture, though they never received a drop of her milk.

During the festival of Purim, when we remember how Persian Jewry was saved by the efforts of a Jewish woman, it is important to recall that Esther is revealed to us as fantasized by the rabbis. She is, no doubt, their idea of womanly virtue. In their depiction of the heroic Esther and the heathen Vashti, the rabbonim lead us to choose Hadassah (Esther), a woman who submerges her identity for the sake of her people. She is perfectly docile, does as she is told, and — just as the rabbis suspected (and feared!) — her womanly charms are more compelling than law.

The sheer vilification of Vashti in the Megillah and rabbinic sources, tells us just how troubled our tradition is by the corporeal woman and how she must be circumscribed. To heap infamy on Vashti, they declared her the granddaughter of Nebuchadnezzar, the Babylonian tyrant who laid siege to Jerusalem and ignited the Babylonian exile. They tell us that she made Jewish women work, naked, on Shabbat, and that she was both promiscuous and a Jew hater. The Talmud reveals rabbinic enthusiasm for her punishment; the rabbis suggest that she had a tail like a serpent and leprosy.

Curious. Because in the Megillah, Vashti’s only crime is modesty, refusing to obey the order of a drunken king to dance naked for his guests at an orgy. For her disobedience, Vashti is banished and the Megillah trumpets a new proclamation that resounds through the land: “Wives will show respect to their husbands, great and small alike.” Let us not be misled by the caprice and delirium of our Purim celebration. The real concern of the story of Esther is not in Persia, but in multiple layers of power and dominion: men over women, us over them, Mordecai over Haman, submissive sexuality over royal edict.

Mordecai, the proud and perceptive court Jew surreptitiously places his niece in the king’s harem. Dark and comely, she knows how to please. And she follows orders. When told to conceal her heritage, she does. Whatever Mordecai decrees, Esther obeys. It is at Mordecai’s insistence, and his reminder that she will not survive the massacre of the Jewish people, that Esther is moved to appear before the king unannounced. Yes, she exhibits courage, though many rabbinic commentators indicate she had little choice. But the story marks Esther as the first dumb blonde, the first scab, a woman who offers herself as a sacrifice on the altar of Jewish patriarchy. And therein lies her virtue.

This holiday sees Esther as the corrective for a woman who stood up for herself and the dignity of women everywhere. Esther stepped in to replace Vashti, a woman who held her ground and said no to power. Vashti said no in the face of banishment and infamy. She had a mind and used it. She had a body and kept it. She had a name, which we vilify, choosing instead to name so many of our daughters in honor of Esther.

Today we celebrate a nuanced tradition, developed over millennia and as diverse as the Jewish people. I celebrate Purim by remembering my bubbe and her cow, and how Vashti drew her to Jewish learning. After months of hearing Vashti’s lowing outside his cheder, Uncle Chaim invited his niece in, to sit in the back, to observe. It there, is in this all male classroom, that my bubbe learned to read and write, where she sipped the first trickle of Torah denied to most women in her time. And though she never had a drop of milk from the actual cow, my bubbe received the milk and honey of Jewish literacy and knowledge through the intervention of a bovine creature named Vashti.

Ellen Golub is the author of PsychoSemitic, a comic novel in the tradition of Sholem Aleichem. She also is author of the newly released second edition of the J Girl’s Guide. For several years she taught American Jewish literature at the University of Pennsylvania and has been a long-time journalist in the Jewish press. She writes from the Hadassah-Brandeis Institute, where she is working with Shulamit Reinharz on feminist interpretations of the parshiot.