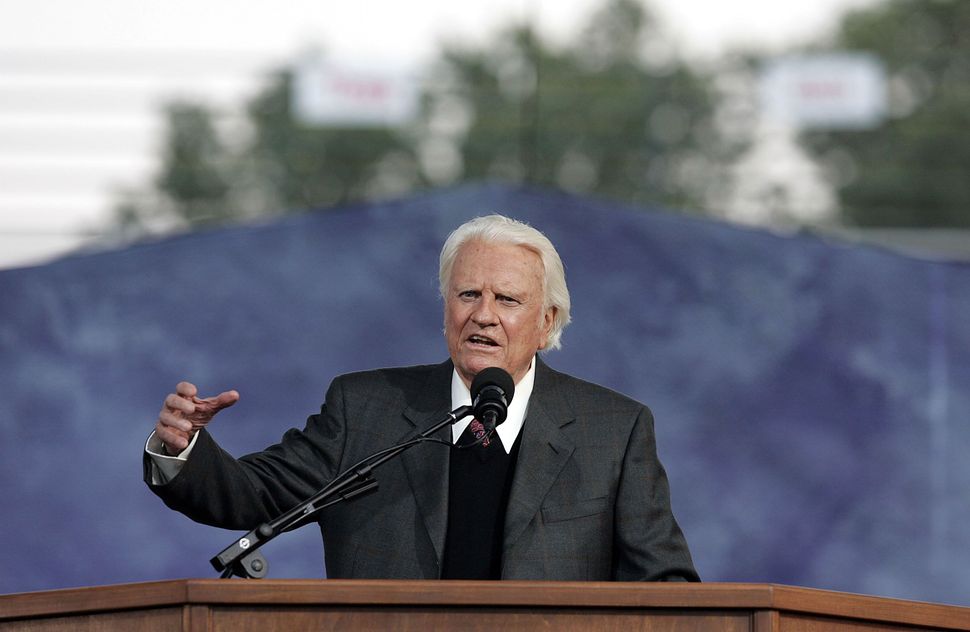 On February 28 and March 1, 2018, the body of Rev. Billy Graham will lie “in honor” in the rotunda of the U.S. Capitol. Previously, in our Nation’s history, Congress has accorded this privilege to only four private citizens — Pierre L’Enfant, Rosa Parks and two Capitol Police officers killed in the line of duty. For private citizens, lying in honor means the same thing as official dignitaries lying in state. In my opinion, by extending this distinction to Billy Graham, Congress violated the Constitution.

The First Amendment begins, “Congress shall make no law respecting an establishment of religion…” The Establishment Clause prevents courts from settling religious doctrines, supporting — financially or otherwise — one religion over another or all religion against agnosticism or atheism, as Justice Black explained in Everson v. Board of Education, 330 U.S. 1 (1947).

No case has arisen over a preacher lying in honor. However, litigation has occurred when it comes to displays, such as creches and crosses on government property. As far as concrete rules, the Supreme Court has tied itself into knots as far as what the First Amendment permits. For example, in Lynch v. Donnelly, 465 U.S. 668 (1984), a 5-4 majority held that the Town of Pawtucket, Rhode Island could erect at public expense a nativity scene each December. The majority concluded that the scene formed but a part of the presentation, which included such “secular” figures as Santa Claus. The majority also held that the commemoration of the holiday served a secular purpose of teaching history.

Despite the confusion, the Supreme Court has applied consistently a three-part test to determine the constitutionality of religion-tinged monuments. First, the display has to serve a secular purpose, even if also a religious one. Second, the government must neither endorse nor inhibit religion. Finally the display must not entangle the government in matters of faith.

These principles forbid honoring Graham in the U.S. Capitol. Billy Graham gained fame as an evangelist — one who sought to convert so-called lost souls to Christianity. True, he befriended political figures, but at the core, he spent his life preaching Fundamentalism. The U.S. government paying tribute to him officially endorses religion — in particular, his brand of Fundamentalism. The honor serves no secular purpose. Unlike Ms. Parks and the Capitol policemen, Graham lived exclusively as a religious figure. Until his death, Graham remained an evangelist through and through. A country whose Constitution has erected a “wall of separation between Church and State,” as Justice Hugo Black in Everson quoted Thomas Jefferson, should keep its public buildings free from religious entanglement and let his flock honor Graham.

Indeed, the Founding Fathers enacted the Establishment Clause to keep the government out of sectarian controversies. Congress landed thick in the middle of one, when it chose to give Graham an official honor. Many. notably, Washington Post columnist George Will, reminded us that, in “private” conversation with Richard Nixon, Graham expressed rabidly anti-Semitic views.

Graham’s apologists cite to FDR and Harry Truman’s comments and say he was no more anti-Semitic than those presidents who helped Jews. Graham’s defenders fail to put the presidential remarks in any context and ignore the linguistic mores of an earlier era. But I take Graham’s words to Nixon at face value. Better to avoid arguing over whether those in control of Congress are endorsing, or at worst, turning a blind eye to anti-Semitism.

In a recent case., the U.S. Court of Appeals for the Fourth Circuit (encompassing Maryland, Virginia and the Carolinas) ruled that a huge cross on public land overlooking a major highway did not belong there. American Humanist Association v. Maryland Parks and Planning Commission (4th Cir. Oct. 18, 2017). The majority held that, as a Christian symbol, Jews and others who don’t practice Christianity driving along the road should not have to endure an offensive symbol the government placed there. Our Founding Fathers, mostly Deists, understood the need to respect minority beliefs.Neither does Billy Graham’s coffin in the rotunda of the U.S. Capitol.