In Defense Of Dressing Up On Purim 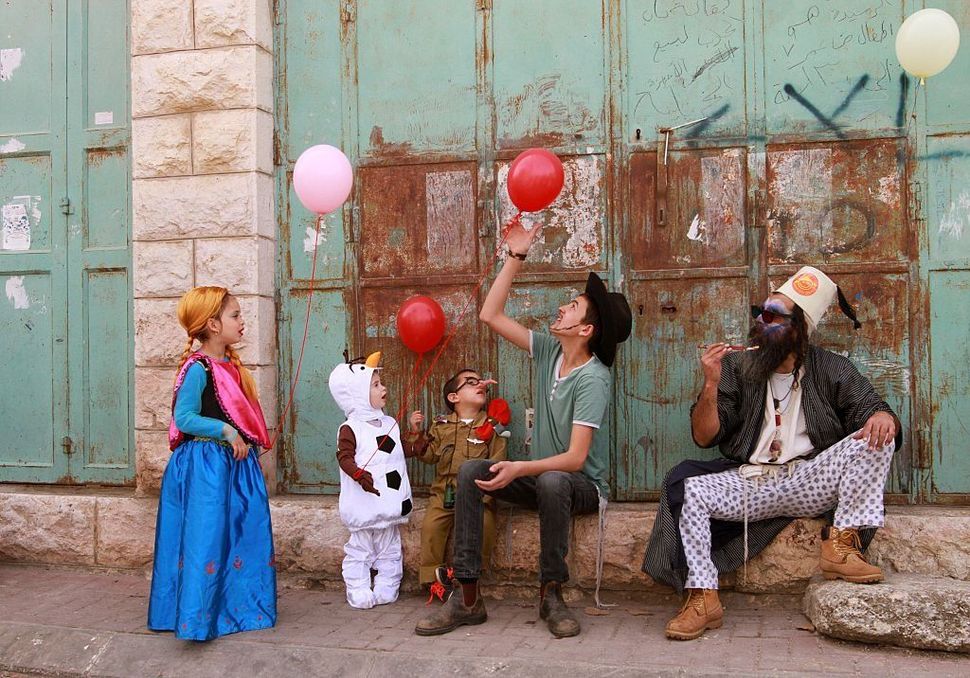 Dressed up Israeli settlers take part in a parade during the festivities of the Jewish holiday of Purim on March 24, 2016 in the West Bank town of Hebron. Image by Getty Images

The Forward recently ran an article by Elon Gilad that argues that dressing up for Purim is a relatively new tradition, dating back to a particular banquet in Vienna in 1900. The article is interesting, but it has one of the worst headlines I’ve seen in recent memory: Wearing Costumes On Purim Is Not A Real Jewish Tradition.

I beg your pardon?

When my eight year old woke this morning, he said to me, “Mom, it’s almost Purim! I’m so excited! I’ve been waiting for this day for sooooooo long!”

He’s excited about dressing up. Not about hearing the megillah, not about eating hamantaschen and not about giving gifts to the poor, as fine as those traditions are. He’s an eight year old kid, and what excites him about Purim is getting to put on a costume and be someone different for a night. He’ll be dressing up as one of his heroes, a teacher from a favorite cartoon, and when he tried on his costume he practically levitated with joy.

(Fortunately he’s too young to read the Forward.)

I object to the headline because it minimizes something people love about this holiday. I also think it ignores the extent to which masks and hiding are integral to the megillah of Esther. Esther’s name shares a root with nistar, “hidden;” she hides her Jewishness until the time comes to reveal her true identity; even God is hidden in this book. (See last year’s d’varling, What costumes can reveal.) Wearing costumes may be a newish tradition, but it can be rooted in the holiday’s core text and its themes.

I also think Gilad is missing something when he traces the costume / mask tradition only to the year 1900. In the Code of Jewish Law, R’ Moses Isserles (1520-1572, also known as The Rama) writes, “There is a custom to wear masks on Purim, for men to wear women’s clothing, and for women to wear men’s clothing[.]” That’s from the 1500s: still fairly recent, compared with some Jewish traditions, but clearly R’ Isserles saw masks and cross-dressing as common enough to be mentioned as standard custom.

Beyond that, I object to the idea that anyone (even the Forward) gets to determine what is and isn’t a “real” Jewish tradition. Yes, Jewish tradition often valorizes what’s “old” and “traditional,” but there’s also always been a strand within Jewish tradition that glorifies making-new. Our liturgy teaches that God every day makes creation anew. When we take our traditions seriously enough to reinvent them and infuse them with new meaning, we too can be renewed. Halevai: we should be so lucky.

So what if dressing up for Purim doesn’t come to us “mi-Sinai,” as divine revelation directly from the mouth of God, as ancient as Torah itself? The practice of celebrating bat mitzvah for girls is a relatively new innovation too. So is ordaining women rabbis, or for that matter even counting us in a minyan. I thank God for those innovations, and I thank God for the practice of dressing up at Purim, too.

In Defense Of Dressing Up On Purim