This Greek Camera Shop Is A Testament To Jewish Resilience 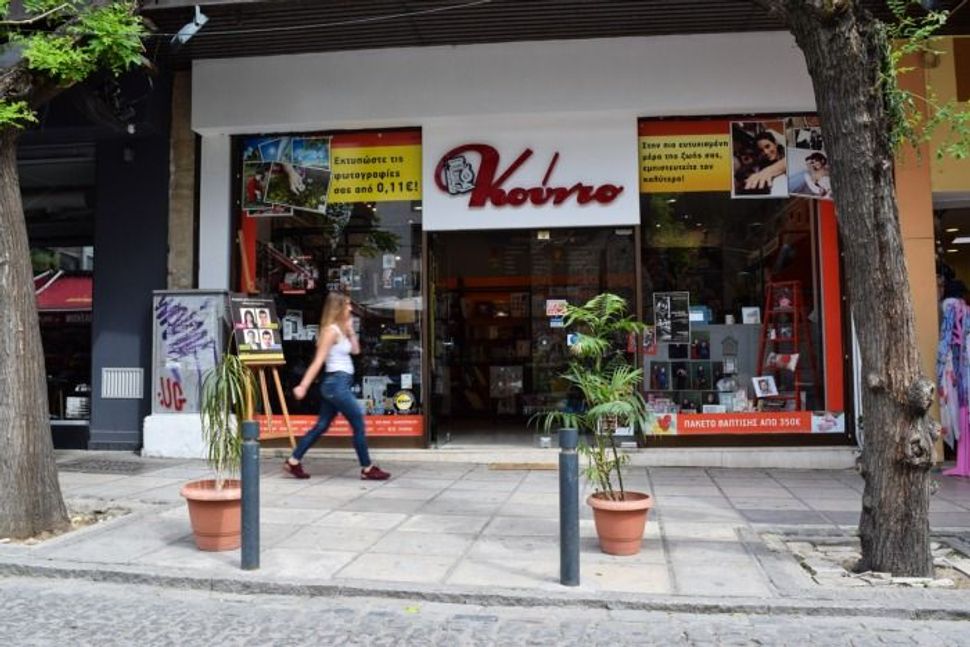 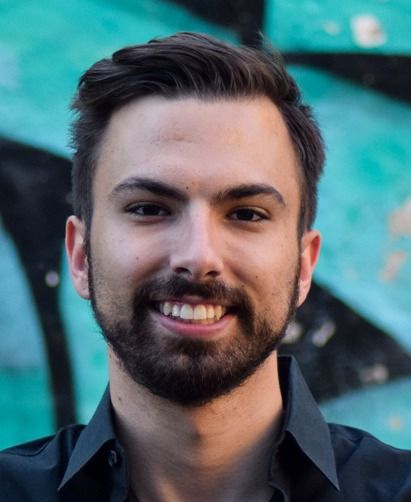 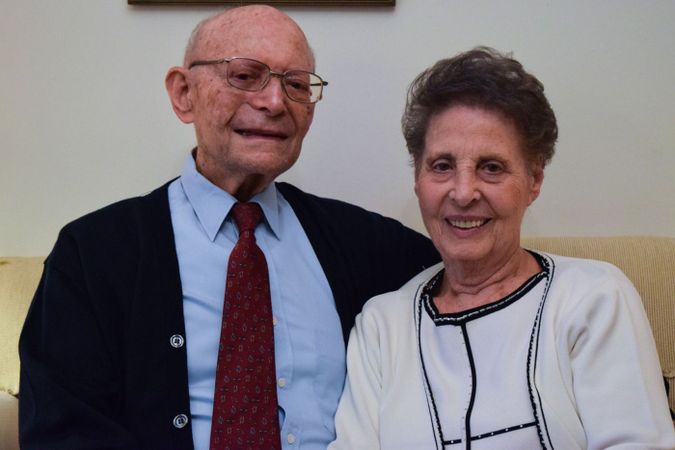 Heinz Kunio, 89, with his wife, Rachel Kunio, 85, in their home. They have
been married 54 years. Image by Bridget Peery

Crowded Komninon Street and its worn, cracked charcoal-colored cement suggests there’s important history contained here in these vibrant storefronts, and, more importantly, in the people who occupy them.

One, a shop with the red lettering “Kunio,” has a story to tell that’s perhaps more compelling than most. Spotless, tidy, with items organized by color, Kunio is a well-known camera store located on Komninon 24 in Thessaloniki. Open for the past 47 years there — 100 years in total — its owner, Heinz Kunio, is a Holocaust survivor who regards his store as a testament to recovery, to the strength of spirit and to the resiliency of a human being who experienced life’s worst and survived.

Heinz Kunio was born in 1927, son of Salvator and Hella Kunio, who as residents of Thessaloniki in 1943 were shipped along with 1,950 Jews to the Auschwitz-Birkenau concentration camp in Poland. Sixteen at the time, Heinz, his sister Erika, 13, and his parents were packed 80 dense into stifling boxcars, a doomed cargo that in the end totalled 56,000 people sent to death camps from Greece.

“We were quite, quite dazed because being closed in a wagon with 80 people with not enough air to breathe. So many days [passed] we didn’t know what was happening,” Kunio, who is now 89, said of the start of his family’s ordeal.“[That] was the first time that we saw how brutal the Germans were. Anyone that tried to go away… one of the guards [would] shoot immediately with their small machine guns,” said Kunio.

To tell his story, Kunio sits next to Rachel, 85, his wife of 54 years. He’s dressed in a navy-blue cardigan, light blue dress shirt and garnet red tie. They’re in the couple’s Thessaloniki apartment, three flights up on Kamara street, behind a beautiful door with a golden knob.

It’s from his perch, overlooking the city of Thessaloniki, amid family portraits and purple and red flowers on small pearl-white wooden tables, that he recounts how German soldiers maximized every opportunity to terrify and terrorize their prisoners. After seven days on the train, they arrived at Auschwitz-Birkenau just before sunset. The sky slowly transitioned into a deep indigo, Kunio said, which terrified the prisoners that night was coming.

“It was always done so meticulously with great intention of creating more and more fear,” said Kunio. “In order to obey, you have to become terrified… and we were very afraid.”

People who failed to carry the heavy weight of cargo and supplies also transported by the trains were beaten, tortured, shot and killed. Men, women and children all were forced to obey orders, even the ones who had burning knees from standing in the wagons for seven days. Starved, people were weak, vomiting and could barely walk.

“It was a night that even Dante [Alighieri], the famous [Italian poet], could not describe as a night of hell,” Kunio said.

His first memory of the camp was of five factories separated by about 500 feet, black smoke pouring out from their chimneys and billowing over the camp. He later realized it was the sight of the people who were burned. But because Heinz’s mother, Hella, was half German and taught the family how to speak the language, they were not destined to be among them. The soldiers asked who could speak German — the Kunios were the only ones on their train — and so they were separated from the rest. “That was why we were saved.”

The family was sent to the main labor facilities of Auschwitz to work. Kunio and his father tailored clothes for German soldiers — something they had to learn on the job to be useful since Salvator was by trade a businessman who sold cameras and parts. The mother and sister were sent to a separate building to work.

Nine months later, all four were transported to Austria where they spent a year and three months enduring hard labor work, including chopping down trees and cutting through walls to store dynamite inside.

On May 9, 1945, two days after the war had officially ended and exactly two years and two days after they left Greece, the family witnessed U.S. Army trucks and tanks arriving. General George S. Patton himself led the liberation. A U.S. soldier approached him and said “You are free. You are all free. Come with us,” he recalled. 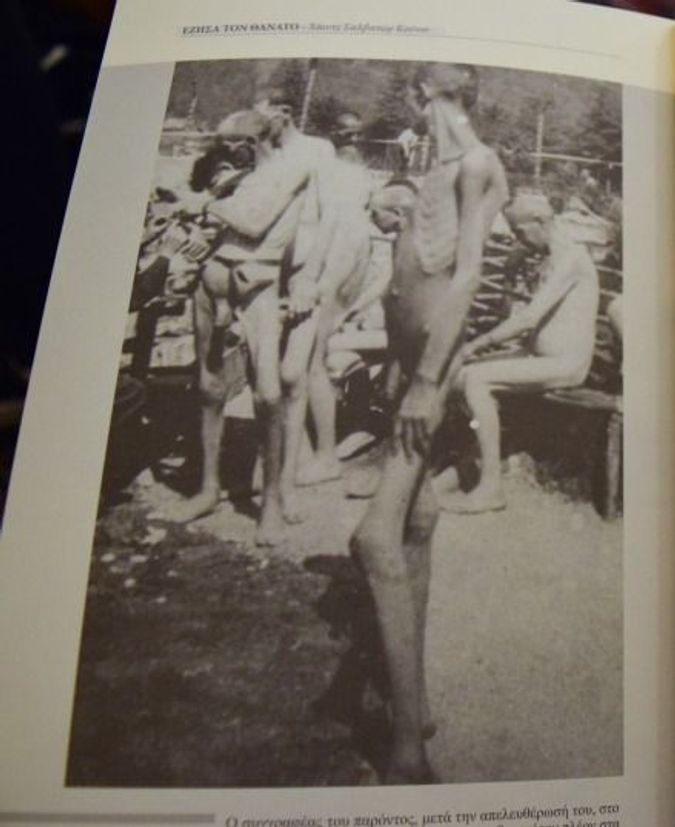 A published photo of Heinz Kunio taken by his father, Salvator Kunio, the day his camp was liberated. Image by Bridget Peery

“I was so exhausted, not only exhausted but very thin — 27 kilograms,” or about 60 pounds, he said. “If you [saw] me, you would [have] been astounded. My legs were in so much pain I could not move them. When the U.S. soldiers told me I was free, I asked them to carry me because I knew I couldn’t walk.”

Kunio, who was then 18, and his family, along with about 1,000 other camp survivors, were liberated. What happened next is what brings the story back to crowded and storied Komninon Street. Because it is there, in the family’s little camera shop, that they started to live as they wanted again.

After two months of recovering as a free citizen in a U.S.-run facility at the same camp, Salvator Kunio took his family back to Greece. The elder Kunio had picked up a camera offered by the Americans during that time to help with documenting the torture methods used by the Germans. Photography proved to be an escape, and helped to distract him from the horrors he had endured.

When they got back to Greece, he scraped together enough money by combining what they left at home prior to the war, and reopened the camera shop in 1945. After 43 successful years as head of the business, Salvator passed away in 1960, and Hella a year later. So Heinz took over but moved the shop to the smaller, more manageable building on Komninon.

Kunio still oversees the family camera shop though many of his old friends and regular customers have died. But it has also brought new, young customers and friends through its doors. His own son Salvator helps him run it. Two of his eight grandchildren, Nora and Larry, run it with him too.

“It’s very important to have this shop. It [has] stood in Thessaloniki for many years — before the community was almost eliminated,” said the younger Kunio, Salvator, 62. “I think it’s important for the town too, not just the community.”

The shop has fallen on difficult times in the midst of an economic crisis in Greece that has seen many businesses buckle under fewer customers and higher taxes imposed by the government. The family is doing its best to hold on. “It’s very important to our family, but it’s also a heavy burden to keep it running during the Greek crisis, and also during the digital camera age,” said Salvator Kunio. “We are trying to keep it alive.”

Still, Kunio endures as one of the most popular camera shops in Thessaloniki and remains a symbol of triumph for the Jewish community, a reminder that new life can rise out of even the most dark places.

“It’s very important. Many Jewish people from Thessaloniki still support the shop, and the shop gives special treatment to those people with different prices or free photo shoots,” said Larry, 29, Kunio’s grandson. His obvious pride is an echo of his grandfather’s, and surely of his great-grandfather’s before that.

“It’s not just the oldest shop in Thessaloniki,” said Larry, “it’s the oldest shop in Greece. And for 100 years now we have been innovative through many aspects in our business. It’s very special to be the fourth generation of this store.”

Despite the crush of a troubled economy and a changing industry, Heinz Kunio continues to hold on to the shop as a symbol of his family, and as a sort of epitaph to his father whose dream it was to open it.

On this warm spring evening in May, the elder Kunio is showing fatigue — nudged by his wife Rachel to remember certain details or facts that have become cloudy — but his pride in his family, and his store, show forth powerfully in the carriage of a man who is a survivor in many ways, not just one.

He points out every photo in the house of each family member, telling specific details of how they used to look as opposed to how they’ve changed, or grown. Some pictures are black and white, others brand new with vibrant color.

There’s one in particular he pauses to note. It’s a black and white photo published inside a dark brown book on the table. In it, Heinz is standing in the Austrian camp. His father took the photo after he and his family were liberated. Many in the picture are naked and in tears as they rest on a wooden bench. Every man’s head is shaved. No one looks directly into the camera. Heinz is not crying but he is paper-thin, standing in the dirt, with his skin stretched tight across his bones and rib cage.

“I have lived a long life,” he said, clearly at peace as the light outside wanes and the sky slowly turns a deep indigo. This picture captured by his own father, his camera shop, his wife and his large, loving family affirm that. “I have been fortunate enough to enjoy [it] with my family and my wife.”

Brandon Carusillo recently graduated Northeastern University with a master’s in journalism. While Brandon’s primary interest is in sports journalism, he is an avid consumer and supporter of all forms of written expression.

This Greek Camera Shop Is A Testament To Jewish Resilience