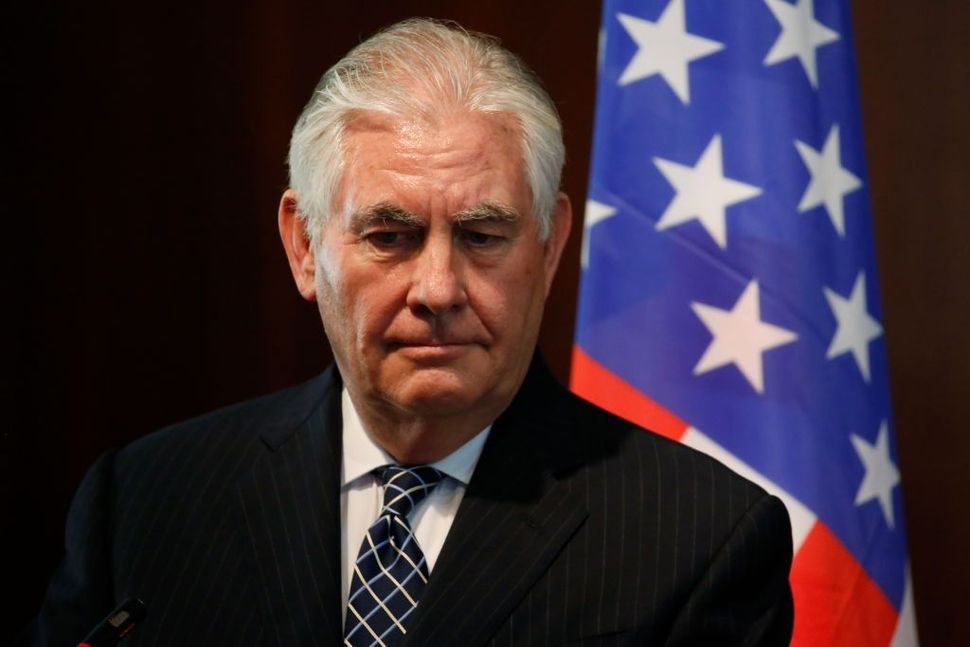 US Secretary of State Rex Tillerson looks on as he holds a joint press conference with Nigeria’s Foreign Minister in Abuja, on March 12, 2018. US President on March 13 sacked his top diplomat Rex Tillerson and named current CIA chief to succeed him, ending a rocky tenure by the Texas oilman who had been sidelined on the world stage by the mercurial president. Image by Getty Images Rex Tillerson barely made it past a year before he was summarily fired by President Trump. It was more of a beheading than an actual firing, a public humiliation to which hardly any Secretary of State has ever been treated. And no one at the State Department is shedding a tear.

Why? Because he was categorically one of the country’s worst chief diplomats ever to serve at State.

I had the privilege of working in the U.S. diplomatic apparatus under three Presidents — Clinton, Bush and Obama — and under four Secretaries of State: Albright, Powell, Rice and Kerry. These secretaries of state were respected as leaders in their own right. They spoke truth to power. And when the power didn’t like it, the disagreements were hashed out behind closed doors.

Clearly that is not how President Trump likes it.

There are three core jobs for a Secretary of State. The first is to represent America abroad. The second is to influence the direction of American foreign policy. The third is to fight for the agency’s staff and mission.

On all three counts, Tillerson was a miserable failure. The result is that America’s global standing has collapsed. Our foreign policy is incoherent and aimless. And our diplomats are fleeing the government in demoralized droves.

Yet it is not at all clear that the next secretary, Mike Pompeo, will fare any better. This is because, in this administration, it’s all about the President. And the Tillerson firing is as much about Trump’s getting rid of someone with whom he disagreed as it is about keeping his cabinet in line.

So while Tillerson attempted to be an “adult in the room,” he found that the president he served resented being contradicted. This does not bode well for anyone in the administration who dares to speak truth to power, even when that truth makes sense.

For example, Trump sought to slash the State Department’s budget by nearly a third and had Tillerson lead the charge. With all the crises in the world, it made no sense. Yet here was a former Exxon CEO diligently leading a massive downsizing of the federal government’s preeminent agency at the behest of the White House. Tillerson saluted in an attempt to stay in the president’s good graces.

By pushing a policy that harmed his own agency and undermined him on Capitol Hill, Tillerson not only gained little support from the White House, but instead facilitated his own demise.

Unfortunately for the country, not only will his departure fail to resolve McCain and Shaheen’s core concerns. It may in fact accelerate them.

This is because Secretary-designee Pompeo has learned the Tillerson lesson: don’t stand up to President Trump.

And this is unfortunate for us all. Because despite Tillerson’s failures, and the fact that he is already forgotten at State, there is a deep sense of foreboding in Washington about what will come next. Now that “Trump will be Trump,” does that mean that State will no longer have a leader who leads, and will instead have a yes-man in charge?

If it does, what will that mean for American alliances with Europe? Will Pompeo advocate tearing up the Iran nuclear deal, for instance? And if he does, what will he propose as the solution for ensuring that nuclear inspections in Iran continue? How will he get the Europeans to support our call for a better agreement when he ripped up the one that they were already a partner to? And how will he then negotiate a deal with North Korea when America’s diplomatic word can no longer be trusted?

A Secretary of State needs to ask these tough questions. But the Tillerson lesson is that even if you do all the White House’s bidding, if you dare to ask the questions that need to be asked, you’re likely going to lose your job.

Right now America needs a State Department that works to advance our country’s interests through alliances and relationships, one that can be trusted, and one that has real influence on the president. Under Tillerson, that all slipped away. Under Pompeo, it’s an open question as to whether it will get any better. And it may get a whole lot worse.

So buckle up. Tillerson is gone and his successor knows what he’ll have to do to survive. That means following Trump’s lead without question. And that likely means more insecurity for those who serve our country admirably at the State Department, as well as for our country as a whole.