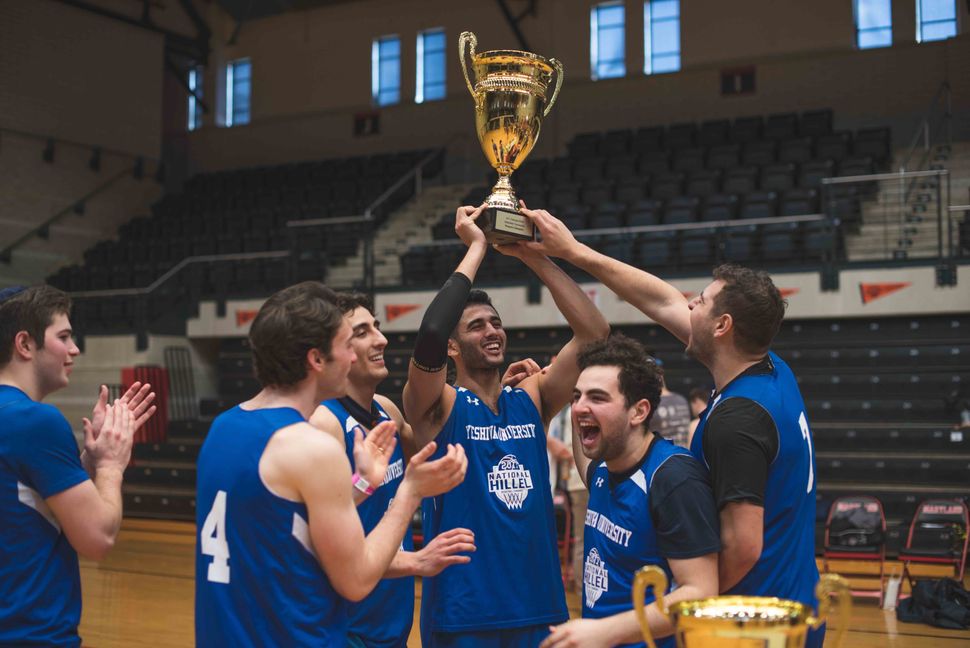 On the weekend of April 19-22 the University of Maryland (UMD) will be hosting the 8th annual National Hillel Basketball Tournament (NHBT). Image by Hillel International

Where March Madness ends another madness begins, and, no, I am not referring to Pesach cleaning. On the weekend of April 19-22 the University of Maryland (UMD) will be hosting the 8th annual National Hillel Basketball Tournament (NHBT). Beginning in the early Fall semester, a board comprised of 24 UMD students is hard at work to plan this featured Jewish event of the year. Hillel international is the world’s largest Jewish campus organizations, active in over 550 colleges and universities across North America and 56 countries abroad. The camaraderie and Jewish enthusiasm of the tournament embodies Hillel’s vision of “a world where every student is inspired to make an enduring commitment to Jewish life, learning and Israel.”

The tournament is one of the largest Hillel gatherings in the world, attracting participating schools and visitors from across the US and bringing them together to spend a weekend full of lively competition, exciting events, and vibrant Judaism. Last year’s tournament attracted over 1,500 participants, including over 400 players as well as fans and visitors from all across the country. This year’s tournament is on track to match, if not surpass, those impressive numbers. Teams come from all across the country including The University of Kansas, Harvard, Miami University, University of Texas at Austin, Johns Hopkins and many more.

The competition is serious and intense, with motivated players competing for the holy grail of Jewish Basketball, the ‘Kiddush Cup’. This year, all preliminary games will take place in five different courts at UMD’s state of the art Xfinity Center, the official home for the school’s NCAA (Division I) basketball team, the Maryland Terps. In an exciting new addition to Saturday night activities, Gift of Life will be introducing a bone marrow donor to their recipient for the first time in an effort to raise awareness about bone marrow registration. After a night of lively and competitive games, the final teams will compete in the women’s and men’s championships on Sunday morning, with an awards ceremony to follow.

The competition is exhilarating for both players and sports enthusiasts alike, but NHBT goes beyond just basketball. Attracting Jews from all different backgrounds, NHBT fosters the perfect climate for young, Jewish students to share different perspectives and meet new friends from across the country.

Joshua Blustein, a double major in Economics and International Studies with a minor in Entrepreneurship and Management at Johns Hopkins University, was a first-time team captain in last year’s tournament. When asked about the impact the tournament had on players’ Jewish involvement on campus after the tournament, Blustein stated

“I was very involved in Hillel and was the treasurer of the Jewish students association, but some of the players had little to no involvement to Hillel. For those who were not very involved with Hillel, the tournament had tremendous success. Aside from befriending active Hillel students, some who had rarely, if ever, came to Hillel events […] had [developed] an overall heightened feeling of comfortability in the Hillel building and with Jewish events on campus. Their pride and affiliation with being Jewish was very much impacted. All of our players increased their involvement in Jewish life in concrete ways after just one tournament. Maybe Johns Hopkins was unique. I like to think not. The lasting impact of NHBT on their Jewish journeys? It has just begun. ”

The highlight of the weekend is unarguably the marquee Friday night Shabbat dinner, where students gather to celebrate their Judaism and meet new people. With over seven hundred attendees at last year’s dinner, we will be hosting the dinner this year in an even larger space on campus to accommodate for the growing number of visitors. Prayer services will be held at The Ben and Esther Rosenbloom Center for Jewish Life which serves as the Jewish home base on campus throughout the weekend.

The NHBT board works tirelessly to plan exciting events that engage players and visitors alike, such as skills contests, concerts, and speakers. This year, we are honored to have David Blu, a former Maccabi Tel Aviv player, join us for the weekend to share some of his experiences on the court and beyond. All of these exciting events and activities would not be possible without our generous sponsors, including the Levenson Family Foundation, the Leader Family Foundation, the Wilf Family Foundation, PepsiCo, The University of Maryland Hillel, Aquafina, Under Armour, Ben Yehuda Pizza, Adventist Health Care, The Forward, AEPi, Gift of Life, Masa Israel, Onward Israel, Hebrew Union College, The Domain, Hebrew University, the Orthodox Union, 6 Points Academy, JCC Maccabi Sports Camp, Camp Micah, and Klipped Kippa.

The NHBT board and UMD students look forward to meeting all participating teams and visitors this upcoming April and cannot wait to share in the excitement this of this year’s tournament. Follow us on Facebook at National Hillel Basketball Tournament and find out more on our website at hilleltournament.org!