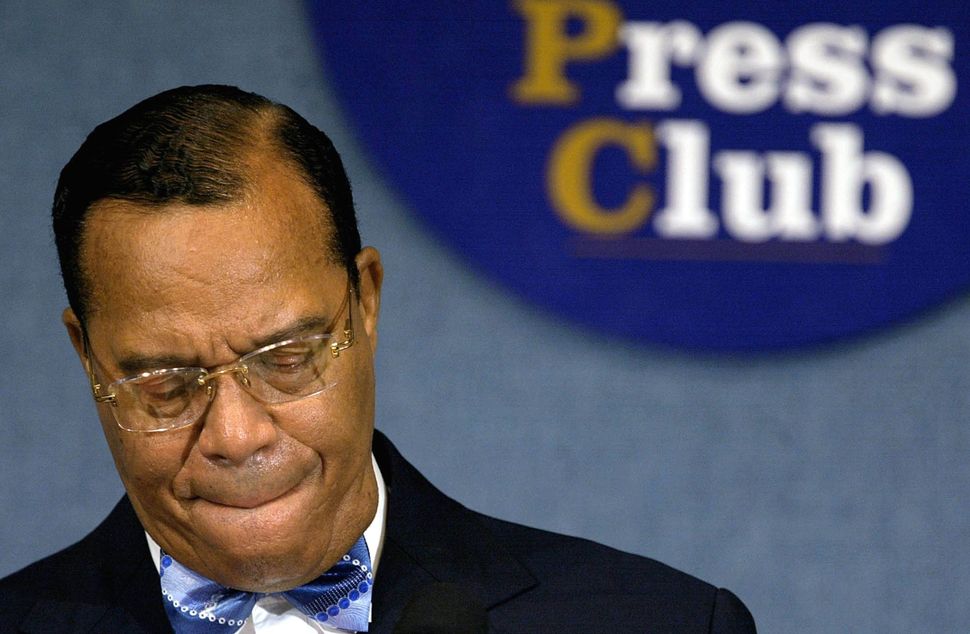 Louis Farrakhan is quite possibly the most popular anti-Semite in America. While neo-Nazis and white supremacists drummed up a mere few hundred people at their “national” rally in Charlottesville, Farrakhan’s recent rant in Chicago excited an adoring crowd more than three times that size. No antifa protesters have ever shut Farrakhan down when he calls the Jews the “synagogue of Satan” and Judaism a “gutter religion.” In Chicago, he called Jews “my enemies” and told them that “your time is up, your world is through.”

Unlike other anti-Semites, Farrakhan has open sympathizers in positions of power — on the right, yes (David Duke loves him), but more painfully and more importantly inside the black community and on the left, which significantly influences America’s future leaders. The photo of Obama smiling with NOI’s leader is undeniably painful to bear. What Louis Farrakhan says about Jews will only reach more and more people.

What are the Jews to do? When several major leaders of the Women’s March refused to break with Farrakhan, in the aftermath of his despicable “hate-the-Jews” speech in Chicago, one Jewish Women’s March leader resigned. But a single bold moral rebuff is not a strategy.

For that, the problem needs first to be clearly articulated:

How can Jews press liberal activists to firmly part company with the Nation of Islam leader, given the widely held view that certain of his “crazy” views aside, Farrakhan is a legitimate leader of an oppressed people who gives voice to black liberation and black pride? Wouldn’t opposing Farrakhan be — or be inevitably seen as — siding against the vulnerable, dispossessed black people, who Farrakhan and his supporters claim he represents?

But Farrakhan is not the champion of the dispossessed he claims to be. As has been shown repeatedly, in the 1990s, he chose to side with people accused of enslaving Africans. 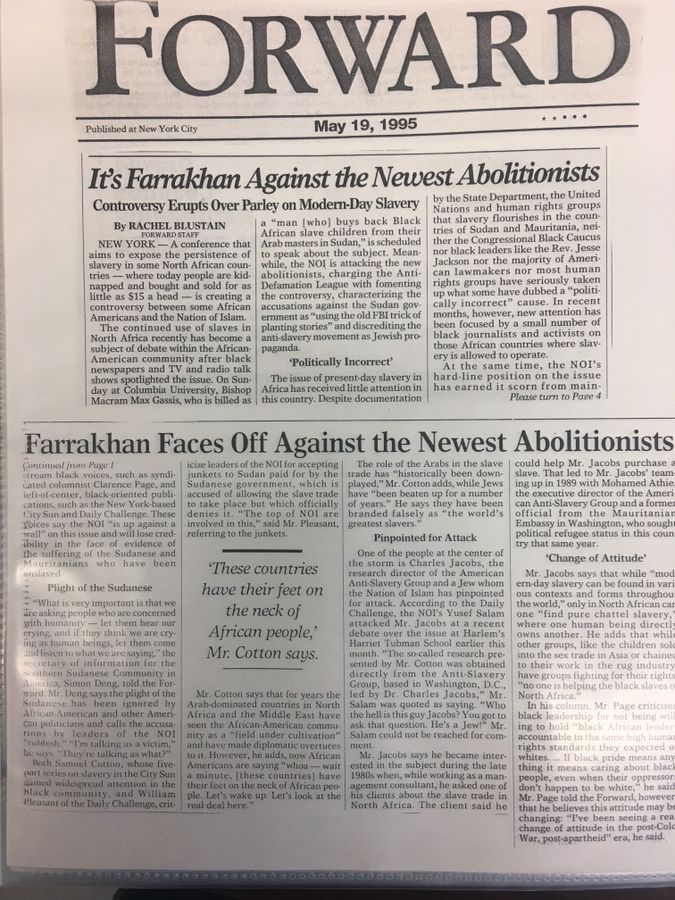 It’s Farrakhan Against The Newest Abolitionists Image by Forward Association

As head of the American Anti-Slavery Group, I co-authored a July 13, 1994 New York Times op-ed entitled “Bought and Sold” with Mohammed Athie, an African Muslim refugee, that brought national attention to the plight of black chattel slaves in North Africa. In Sudan, for decades, as part of a war waged by the Arab north against the black, mostly Christian south, militia armed by Khartoum stormed African villages, killed the men and captured the women and children. These served their masters as goat-herds, domestics and sex-slaves. In Mauritania, Arab Berbers who had conquered the area centuries before had always kept African slaves, even though these were Muslims. Western rights groups had thoroughly documented human bondage in these two countries, but did nothing to marshal their constituencies to act. No one was trying to free the slaves.

When Mohammed and I appeared on a popular black news show (PBS’s Tony Brown’s Journal), the Nation of Islam demanded equal time. Its spokesman, Akbar Muhammed, claimed reports of slavery a “big lie,” part of my Jewish conspiracy against Minister Farrakhan. He was particularly upset about our mention of black bondage in Libya. Akbar, it turned out, was Farrakhan’s emissary to Libya’s Muammar Gaddafi who, according to Clarence Page of the Chicago Tribune, had loaned Farrakhan $5 million in 1984. Page suggested that this was what kept Farrakhan mute on African slavery. (Chicago Tribune, 1/31/96)

The ground-breaking headline in the February 1 –7, 1995 edition of the black New York newspaper The City Sun.

Meanwhile, Athie and I built an abolitionist group based mostly on Sudanese and Mauritanian refugees in New York who were disappointed with the response of the human rights community to the plight of slaves in Africa. Sam Cotton, a journalist at New York’s African-American paper, “The City Sun,” published a series on African slavery under a front page headline: “Arab Masters, Black Slaves.” Sam toured black communities across the country. In Chicago he was menaced by NOI. Finally, the NAACP adopted a resolution to come to the forefront of the fight to liberate the slaves. 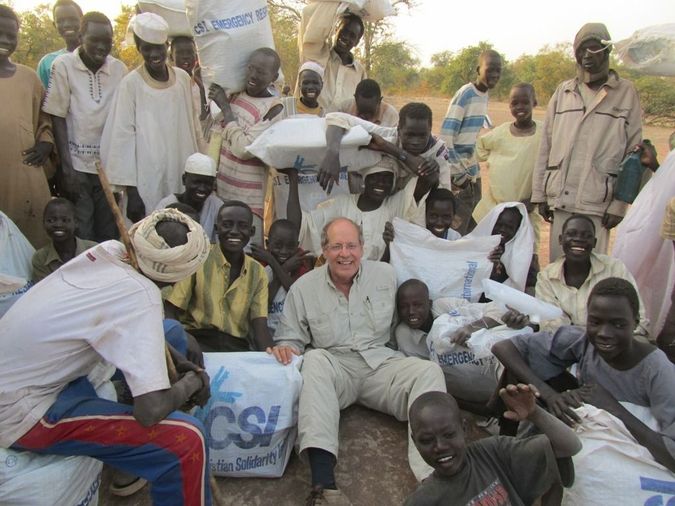 Charles Jacobs on an illegal trip to Sudan in April of 2011 to redeem black slaves.

Cornered at a news conference in March 1996, Farrakhan was asked about the slaves of Sudan. The New York Times reported that an emotional Farrakhan shot back: “Where is the proof? If slavery exists, why don’t you go as a member of the press, and you look inside Sudan, and if you find it, then you come back and tell the American people what you found?”

The Baltimore Sun took up the challenge. They sent two reporters into Sudan where they bought two young African slave boys from an Arab middleman. Their report ran as a series in the Sun and was nominated for a Pulitzer Prize.

Years before, leaders of the south Sudanese peoples’ struggle for liberation asked Farrakhan for his help. But he did not. And he does not, though he could.

For Jews, there is no simple way to bring this up without being seen as having mixed motives. Surely, we would be accused, as we were a generation ago, of “using” slavery for Jewish and Zionist purposes.

But this should not stop us from telling the truth about Farrakhan’s past, or from joining those who are fighting to free the slaves.