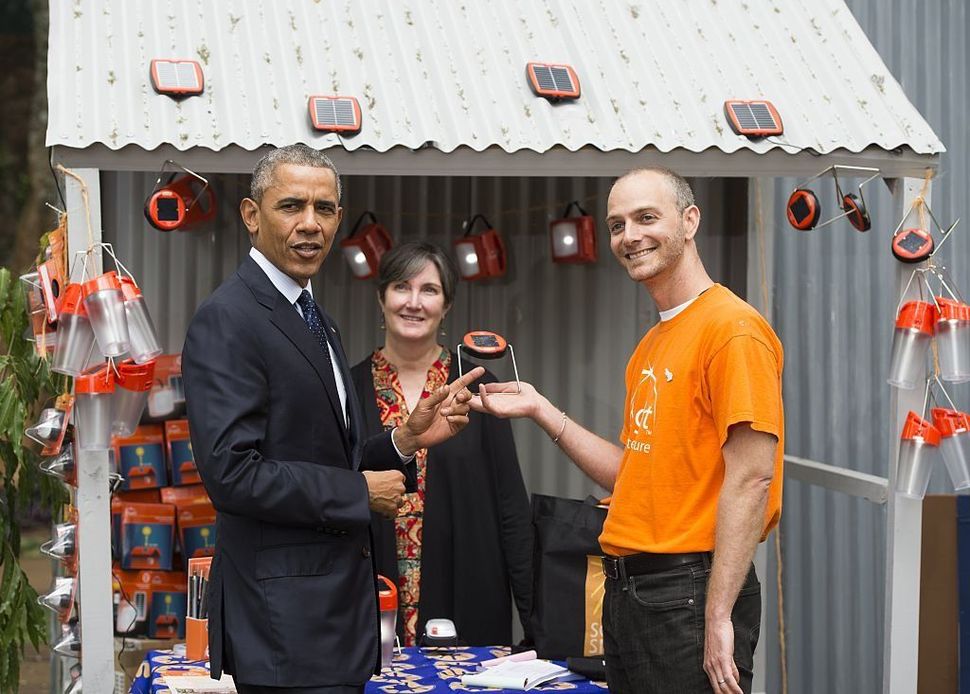 US President Barack Obama (L) talks with Sam Goldman (R), founder and CEO of d.light, and Katherine Lucey (C), founder and CEO of Solar Sisters, about solar powered lights during the Power Africa Innovation Fair, an initiative to increase the number of people with access to power in sub-Saharan Africa, on July 25, 2015 on the sidelines of the Global Entrepreneurship Summit at the United Nations Compound in Nairobi. Image by Getty Images

Becca Heller’s organization, International Refugee Assistance Project, was ready when, on January 27, 2017, the order banning people from several predominantly Muslim countries from entering the United States was issued. IRAP organized a task force of 1,600 pro bono lawyers at airports across the country to defend the rights of incoming refugees and immigrants. Becca was coordinating efforts on the ground and told a New York Times reporter, “That’s how a movement starts.”

Her organization, IRAP, became the lead plaintiff in the first lawsuit filed that challenged Trump’s executive order in its entirety. Last August, the U.S. Government settled and is now required to reach out to every single person who was denied entry or deported under the first Executive Order and who has not yet reapplied for a visa or returned to the United States. IRAP, the first organization to provide comprehensive legal representation to refugees worldwide, pairs passionate law students with experienced pro bono lawyers to provide legal representation to the most at-risk refugees. To date, over 3,200 students from 29 IRAP law school chapters have worked with attorneys from more than 75 top-tier global firms and five multinational corporations, thereby also creating a bar of international human rights and refugee lawyers.

People like Heller are changing the world for the better, and my family believes that supporting their work is essential. 17 years ago, my brother Stephen and I, along with our spouses Andrew Hauptman and Claudine Blondin Bronfman, founded The Charles Bronfman Prize, an annual award of $100,000 to humanitarians under 50 whose innovative work informed by Jewish values contributes to the betterment of the world, as a surprise 70th birthday present for our father. The Prize recipients are innovators and systems-changers like Heller, who are building organizations and bodies of work that have a powerful, positive impact on millions of people around the world. Their work is a reminder during these challenging and divisive times that there are still extraordinary people doing good work, reflecting the best of humanity.

Bronfman Prize recipients aren’t just helping vulnerable people fight back against injustice — they’re also helping those whose lives have been decimated by forces of nature. When Hurricane Maria decimated Puerto Rico, leaving it totally without power, Sam Goldman’s d.light stepped in to provide tens of thousands of solar lighting products to help ensure that Puerto Ricans were not left in the dark. Goldman, the 2014 Prize awardee, founded d.light in 2007 to provide high quality solar solutions for people without access to reliable electricity. His company, thanks in part to a donation from our family that became a challenge grant, helped donate solar power to the Puerto Rico residents after the hurricane. Through distribution hubs in East Africa, West Africa, India, Southeast Asia and the US, d.light has improved the lives of 80 million people by supplying more than 12 million solar light and power products in 62 countries around the world. It also collaborates with microfinance institutions (MFIs) to absorb initial costs for its low-income customers. For people living in extreme poverty, having reliable, affordable and accessible solar lighting has opened up new opportunities. In addition, replacing kerosene lanterns with solar lighting has offset more than 23 million tons of carbon dioxide from entering the atmosphere.

Bronfman Prize laureates are also helping support vulnerable communities internationally. When Karen Tal became principal at the Bialik-Rogozin school in a poor Tel Aviv neighborhood in 2005, she turned a failing school threatened with closure into one whose graduation rates rose from 28 percent to 90 percent in six years. Her model was to create a “school as home” for the most underserved K-12 students – Jewish and Arab Israelis, the children of refugees — all of whose parents work long hours at low-paying jobs.

David Lubell, who will receive the Prize later this month from my father, Charles Bronfman, notes that “One of Judaism’s central teachings is to welcome the stranger.” He founded Welcoming America in 2009, enabling immigrants to the U.S. to be welcomed in 190 communities, largely allaying fears about immigrants while reviving local economies. More than 48 million Americans live in Welcoming Communities that create a climate that supports integration. Welcoming America works with local institutions to break barriers and build bridges between newcomers and long-time residents. At a time of rising fears, hateful rhetoric and rejecting policies about immigrants, these pragmatic efforts offer a counterpoint to the vitriol and myths. David recently launched Welcoming International and will move to Berlin to work initially with communities in Germany, the United Kingdom, Australia and New Zealand.

The Charles Bronfman Prize recipients have created a kind of fellowship, supporting one another and sharing ideas. This network and support has helped leverage their work for even great impact.

Karen Tal says her 2011 award “granted me confidence and created a great commitment on my shoulders” to launch Education Insights that same year to empower public school principals in Israel’s social and geographic periphery to improve student success. “Thanks to the Prize,” she says, and by combining forces with partners, action committees and volunteers, Karen’s organization now operates in 28 schools, reaching 13,000 students with 1,500 volunteers. This growth led to Karen’s receiving a Tel Aviv Creator Award from WeWork last October.

While I am proud of how the Prize has supported these incredible change agents, the truth is that our family has gained much from knowing the recipients.

As I review the nominations for 2018 together with our international panel of judges, I am both excited and humbled to be introduced to a new group of inspiring young humanitarians. At a time when the ignoble grab most of the attention, we must give those who assist and welcome others the recognition, encouragement, partnership and support they deserve. Honoring those who improve the world can only help to lift our own spirits in a discouraging time.

Ellen Bronfman Hauptman is co-founder and president of The Charles Bronfman Prize.