Helping the Israeli Disabled, One Gizmo at a Time 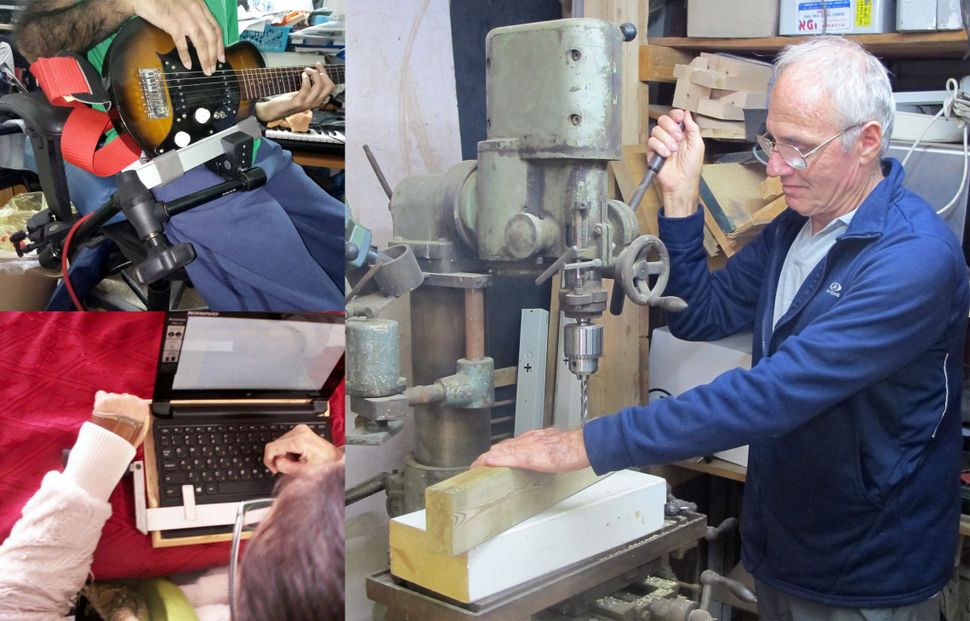 Just up the hill from the kibbutz swimming pool is Nadav Shadmi’s studio in an old chicken run, the rusted feed doors still visible in the wall. It’s most previous incarnation was as a storage space for the arts and cultural committee, and it took Nadav Shadmi months to clean it out, paint, and install electrical wiring and lighting. Now the space is taken up with a drill press, table saw, power sander, and work tables scattered with tools. Along the walls hang the detritus of kibbutz life — scraps of sheet metal, tangled wiring, plastic tubing, door hinges, bicycle parts, soup ladles from the communal kitchen – that might one day be transformed into a cunning device to help make a disabled person’s life just a little bit easier.

Inside, 73 year old Nadav Shadmi is fiddling with a discarded wheelchair, trying to figure out a way to create a manual lever or an electric motor enabling the foot rest to rise up and down. His online research has surprisingly not uncovered a similar device on the market, and he’s convinced this gadget will help disabled people to more easily move from the bed to chair.

Nadav is one of some 400 Israeli volunteers organized by Milbat at Tel H’Shomer Hospital near Tel Aviv that create a variety of contraptions to improve the quality of life and enhance independent living for people with disabilities, the elderly, and those injured in the military or through acts of terror. It might be something prosaic like an arthritic hand-friendly wooden knob on a heater control; a water bottle with a drinking tube attached to a wheel chair; or a flexible arm on a wheel chair to hold a cell phone. It might answer more artistic and esoteric needs such a fabricating contrivances for a woman who paints with her mouth, or a way for a paralyzed person to light Shabbat candles. Last year Nadav worked with a man whose pastime is playing the guitar, but his arms are unable to grasp the instrument; Nadav created a flexible levered arm to rest the guitar on.

“Last year a woman requested an umbrella attachment for her wheelchair,” explained Nadav, who has been volunteering now for three years. “I visited her home in Haifa on the Carmel where it can be very gusty in the winter. An umbrella here wouldn’t last but a few minutes.” Instead, he suggested an alternative; a waterproof cape with a head opening. Once situated in the chair, the corners of the cape are secured to the wheelchair frame with grommets and clips. “She was very pleased and in the first winter, which was quite stormy, she managed to stay dry.”

Nadav was born on Kibbutz Mishmar HaEmeq, and once he married his wife Leah, he moved up the road to Kibbutz Ein Hashofet where they raised four children. Now a grandfather of ten, he is also an avid horticulturist; shading his home on the edge of the kibbutz is a veritable tropical jungle of fruit trees, shrubs and flowers. “One of my early kibbutz jobs was working at the refet (dairy farm). To tell you the truth the milking equipment and the tractors were more interesting to me than the cows themselves,” he smiles. For thirty-five years he worked in the kibbutz Mivrag factory (Metal Cold Forging) as the Technical Manager and then ten years as the Research and Development director at El Tam factory (electrical devices) as the Projects Manager.

After Nadav retired a few years ago, an online search brought him to a website for Milbat, an Israeli non-profit founded in 1981 by Daniel Barak, an engineer from the Weizmann Institute, and Professor Rafi Rozin, who established the rehabilitation unit at Tel Hashomer Hospital.

Simple activities — eating, drinking, moving about, etc. — that most able-bodied people take for granted often are beyond the abilities of those with special needs. A client with a request contacts Milbat and their special need is registered onto a form. If the device doesn’t yet exist, a volunteer will be asked according to his/her particular skills — mechanics, electrical, clothe, wood, etc. — if they want to take it on. Nadav explained that he then travels to the person’s home to assess the situation, where he often discovers other issues confronting the client: Perhaps they need a lever to tip the hot water pitcher, or an inflatable back rest to help tip the client forward in the wheelchair. Sometimes four or five visits are required. “Volunteering for Milbat fulfills three needs for me,” explained Nadav, who typically spends 20-30 hours a month working on various assignments. “I need to do something creative. It helps others, and I have a warm spot for people with special needs.”

Among Nadav’s other recent projects: A woman was able to use her right hand to type on the computer, but unable to push the SHIFT key with her left. Nadav created a lever attached to the SHIFT button that she presses down with her left forearm. Another woman with vision problems who plays piano prints out large typeface copies of the scores, and Nadav figured out a simple stand atop the upright to hang the enlarged sheets. The devices typically need to be specifically tailored to that individual’s body and living environment.

Once a month Milbat volunteers are invited to meetings where they share their ideas and inventions, as well as receive project assignments. Over time an extensive arsenal of devices has been created, cataloged, and photographed and posted on Milbat’s website so a volunteer doesn’t need to reinvent the wheel.

Another of Nadav’s recent projects was at a hospital with buildings unconnected by covered walkways. In the winter the patients being conveyed in wheelchairs or gurneys get wet. Nadav created frames in several shapes and sizes covered on three sides and the top with heavy clear vinyl that a wheelchair or gurney can fit under.

One of Nadav’s disappointments has been what he feels has been a lack of interest and financial support from his immediate community. When several local and national papers ran stories about his work, no one stepped forward with donations of money. At El Tam factory he asked permission to use the metal lathe room for his projects. After many discussions, he was surprised and disappointed when they said no. He also received a negative response from the military when he inquired about acquiring one of their out-of-commission metal lathes. On a more positive note the kibbutz did allow him the former chicken run space and money to fix it up.

“Right now it is frustrating because lacking a metal lathe I am limited in what I can produce,” explained Nadav, who works solely from occasional donations of money and equipment. “I can travel to use a lathe, but often the device I’m working on must be fine tuned, and going back and forth wastes a lot of time.”

Currently Nadav has an idea for wall and bathroom grips with sensors and LEDs inside that light up when a hand approaches, enabling a person to navigate through a dark house without having to turn on a light and wake up a spouse.

Born and raised in California, journalist, author, playwright, artist and photographer Bill Strubbe converted (twice!) to Judaism, made aliyah three years ago and works on the Arts & Cultural Committee at Kibbutz Ein Hahsofet.

Helping the Israeli Disabled, One Gizmo at a Time