Teachers Can’t Hide The Occupation From Our Students 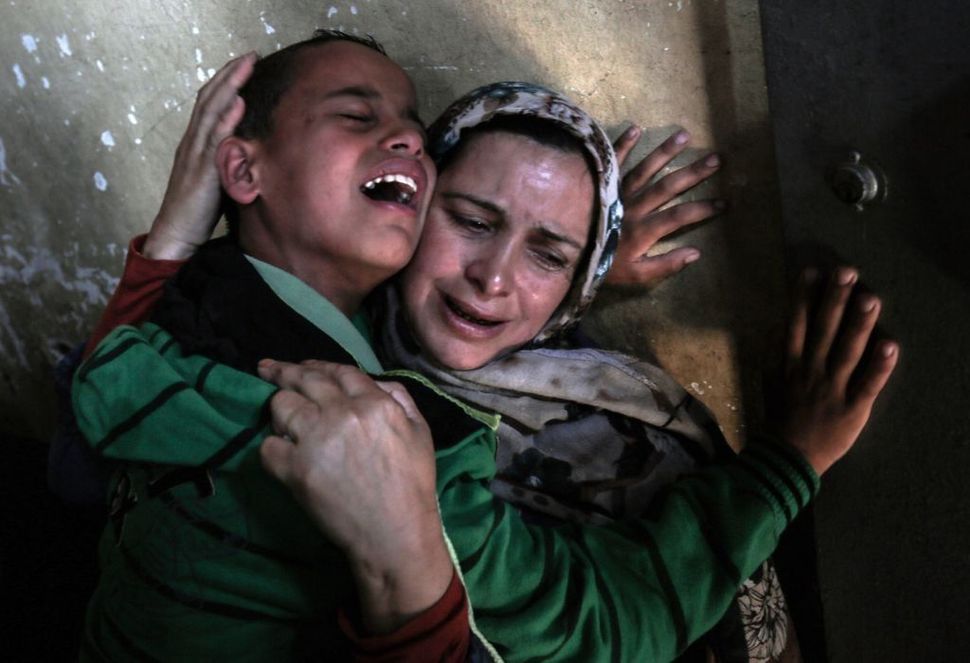 Relatives of Palestinian Tahrir Wahba, 18, mourn during his funeral in Khan Yunis, in the southern Gaza Strip April 23, 2018. - Wahba was wounded with a shot in the head by Israeli fire in a clash east of Khan Yunis on April 6 and was pronounced dead today. Image by Getty Images

As Yom Ha’atzmaut (Israel Independence Day) came and went, alongside the news of 39 Palestinian protesters killed along the Gaza fence (including 15 year old Mohammed Ayoub), I was once again forced to reckon with the version of Israel that I was taught as a student — and the perspective I offer my students as a teacher. As a teenager, I learned about Israel through images: grainy black-and-whites of labor Zionists working the land, beatific soldiers astride the recently recaptured Western Wall, and sleek beachgoers luxuriating in the Mediterranean sea, a modern urban skyline in the background. What was kept from me then were images of the the occupation, of pulverized houses, of bloody civilians and of terrified children.

I’m a history teacher now, and I am in the midst of a painful protracted effort to unearth my bias, to lay claim to my lies, and now to affirm what I know to be the truth. I previously taught at a Jewish day school in Los Angeles and witnessed my students see—and not see—almost the same images as I did. Posters around the school boasted of Israel’s inventions: SMS texting, drip irrigation and the uzi. The occupation or lives of Palestinians never appeared. Even on the maps of Israel around the school, the borders of West Bank and Gaza were invisible.

My Israel education was effective. It did its job and for years as an adult I did what was expected of me as an American Jew: I defended Israel at all costs, I saw Palestinians only as threats to Israel’s “security,” I justified their disenfranchisement as well as the land expropriation and violence committed against them.

While this pedagogic strategy proved effective on me 30 years ago, it is not only unethical: It’s also no longer viable. In today’s modern world of Google searching, it’s impossible to hide the occupation from our students. A video of soldiers cheering after they shoot a harmless Palestinian protester is available at the click of a button. Campaigns like IfNotNow’s #LiberationSyllabus, allow students to literally find their own syllabus to study the Israel-Palestine conflict. Education is rapidly changing, and as educators we should too.

As a teacher of voracious, resourceful and autonomous students now, my primary function is to provide framework and direction, and then simply get out of the way. As educators, our best bet is to welcome the surging movement of students taking leadership roles. To do so, I first gave the students my relatively new, continually evolving but unvarnished perspective on Israel and Palestine, because hiding it would have been impossible, and it would have perpetrated the pernicious lie. Then, I explained that the content of the course would largely rely upon their interests and their research.

This was my approach for the class, with a request for students to adhere to one rule of thumb: absorb and digest as much as you can from each ideological side, and then use your own common sense to sort through and seek a discernible truth. Herein lies the essence of the concept of #LiberationSyllabus and the impetus of IfNotNow and other youth-led movements; students needn’t — and shouldn’t — rely on the material that their teachers provide them with alone. That’s a closed and ultimately desiccated system of learning. As educators, our best bet is to welcome the surging movement of students taking leadership roles, and support them as they become the leaders in their own education.

Moreover, the discovery that their teachers, parents, camp counselors and rabbis have been deliberately — desperately — shielding them from truth destroys the trust that is essential to the survival of educational relationships.The #YouNeverToldMe testimonies clearly demonstrate the disappointment and pain that many others, including myself, experienced in Jewish education.

Trust in the classroom is a two-way street. Students must feel safe knowing that their teachers do not harbor a hidden agenda and that they have the freedom to advance their perspectives. Whenever I’ve been open, honest and trusting with my students, they have reciprocated. But when I haven’t, the classroom atmosphere is fraught, unstable, and hollow.

And so, tasked with deriving historical arguments and safe in their knowledge that whichever viewpoint they expressed –if well-documented—would be accepted, students felt empowered and sought their own academic paths. Inevitably, they endured the slog and the drag of in-depth historical research, and were moved by the shocking scenes of oppression and destruction. But they also came across the occasional inspiring moment or message.

In the end, whichever aspect of the conflict they’d studied, the class collectively reached a universal conclusion about Israel and Palestine: the oppression of Palestinians is not sustainable, nor is it justifiable. I am grateful to my students for unabashedly teaching me a lesson my own teachers would or could not teach me about the occupation and oppression three decades ago: Once you see it, it cannot be unseen.

Sam Schindler is a history teacher and a co-founder of the Stone Independent School in Lancaster, Pennsylvania.

Teachers Can’t Hide The Occupation From Our Students