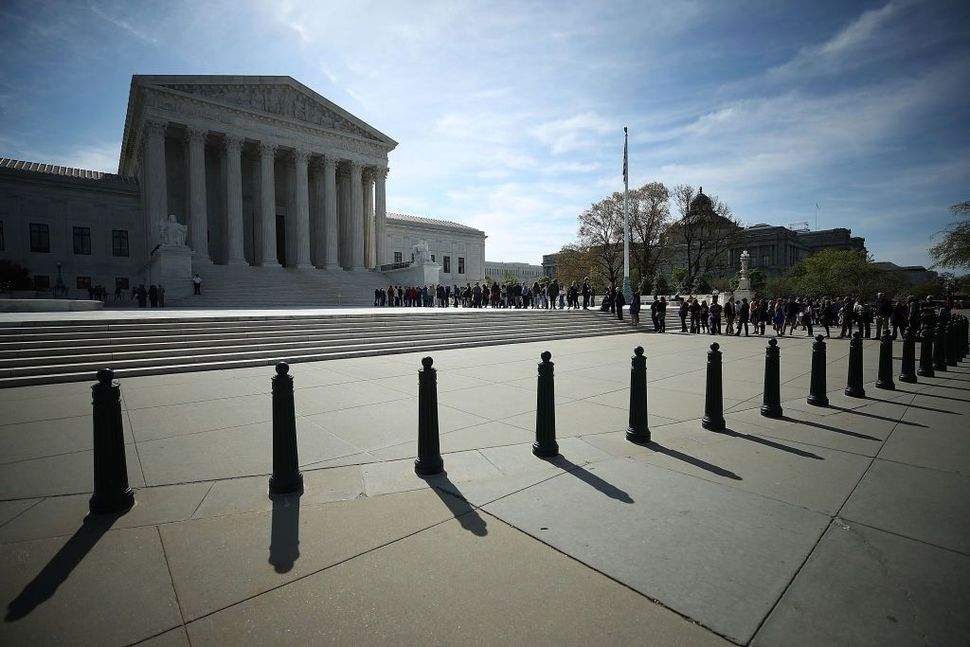 The Supreme Court declined to hear the case of American victims of the second intifada. Image by gettyimages

On April 2, the United States Supreme Court squelched the attempts of U.S. citizens, victims of the second intifada, to collect damages from the Palestine Liberation Organization and the Palestinian Authority. A decision of the U.S. Court of Appeals for the Second Circuit in New York had dismissed the lawsuit. A jury had awarded over $200 million (x 3) in compensation to victims of Arab violence in Jerusalem, Israel. The Supreme Court, in Mark Sokolow v. PLO, refused to review the dismissal.

The court of appeals’ ruling sparked emotionally understandable but legally (and policywise) incorrect severe criticism. To Sokolow’s supporters, this looked like a show of weakness and an unwillingness to hold bad actors accountable. One blogger called dismissal a “blow” against justice. The Supreme Court’s action could only have underscored such misguided condemnation.

Obfuscation in the Supreme Court proceedings made it hard to justify the Court’s conclusion. Keeping with custom, the Court did not explain its decision. Moreover, whether politics or litigation tactics dictated his convoluted filing, the Solicitor General, whose recommendation the Court followed, avoided the merits of the case.

Instead, the government called the Court’s attention to the lack of any contradictory rulings in lower court decisions which would require the Supreme Court to clear up. Also, the government called the Circuit Court decision limited to its facts, with no impact on other cases.The Hill published a commentary castigating the Justice Department for supporting terrorists.

Not so. Effectively fighting terrorism requires squelching civil suits, as the courts did here. Civil litigation does not work, either to compensate victims or to deter terrorism. We must punish and deter through direct means — local prosecutions with the International Criminal Court as a backup, as the 1998 Treaty of Rome establishes.

The key lies in the fact that Sokolow and the other plaintiffs litigated in U.S. courts personal injuries that happened abroad and involved conduct foreigners engaged in. With two exceptions, courts here would leave these controversies to the tribunals where the conduct took place or where the perpetrators live. The court of appeals pointed out that U.S. courts get involved in cases of state-sponsored terrorism or when the conduct concerns a division of a multinational corporation doing business in this country.

An important roadblock closed the first avenue — the U.S. does not recognize the PLO or the Palestinian Authority as a state. Even in the areas they govern under the Oslo Accords, Palestinians do not have an army nor control over foreign policy. That meant that the courts had to treat the PLO as a multinational corporation. Such an approach could not help the plaintiffs, either.

A Supreme Court ruling, Daimler AG v. Bauman, 134 S.Ct. 746 (2014), established the current doctrine. Bauman and others had sued Daimler, the auto company, for its indirect subsidiary, Mercedes Benz of Argentina, allegedly helping the Argentine government commit atrocities during the Dirty War of the 1980’s. The Court rejected U.S. jurisdiction. Pointing out that the Argentine human rights violations “had nothing to do with” and had no impact on the United States, Justice Ruth Bader Ginsburg held that jurisdiction attached only if Daimler had a “home” in the venue in which the plaintiffs brought their case (California). Selling cars through third parties did not suffice.

Here, the Palestinian Authority lacked sufficient connections. It operated only two diplomatic offices in the U.S. — in Washington, D.C. and in New York. From a commercial standpoint, Sokolow’s suit equated to litigating accidents on foreign roads involving cars made abroad. For U.S. courts to get involved would constitute an overreach.

Treating the PLO as a state would do no good, either. An analysis in the Berkeley Journal of International Law shows the haphazard nature of designations of state sponsorship of terrorism, the difficulty of proving that the individual defendant acted in a capacity as an official promoting the policy and the near impossibility of collecting judgments. Most recoveries entail U.S. taxpayers paying the bill. What a way to fight terrorism!

Deterrence requires jailing terrorists. Trials, such as those in the Hague against Balkan warlords, punish the guilty and avoid unintended consequences. Unfortunately, the United States mistakenly refuses to join the Treaty of Rome.