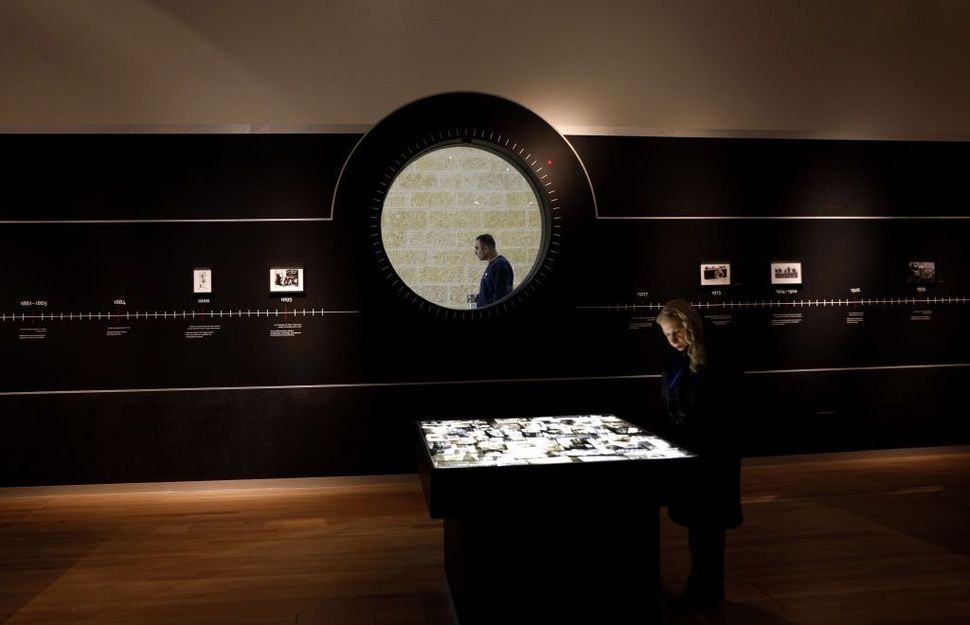 An exhibit at Yad Vashem, the Holocaust memorial museum in Jerusalem. Image by Getty

Two-thirds of millennials don’t know what Auschwitz is — and it might be because no one is teaching them.

I recently applied for a grant to promote Holocaust education at local middle schools through field trips, a unit of Holocaust studies, and survivor testimonies. My grant application was rejected, which wasn’t completely surprising given the volume and quality of competing applications. But I was taken aback by the verbal feedback I received from the grant’s benefactor who told me something along the lines of this: “The Holocaust was a terrible thing, and it should be remembered, but its significance is not as meaningful today. Your project is not something we can turn into an annual occurrence.”

How could someone minimize the relevance of the Holocaust and trivialize its intergenerational impact? I was stunned. I began researching the Holocaust education implemented by my school and other schools. In a private school with a significant Jewish student population, I expected a robust layering of Holocaust studies across grade levels. Instead, I found one unit on Anne Frank in middle school and an overview of the Holocaust in the European history elective. This lackluster effort to incorporate Holocaust education into the regular curriculum nor any special programming on important dates left me wondering about students’ exposure to genocide studies and the specific case study of the Holocaust.

Maybe it’s my personal observations and bias clouding my objectivity, but I imagine that my school is indicative of a much greater trend. Per a 2005 report by the Education Commission of the States, Holocaust education is mandated in some form by only seventeen states. Alabama, California, Georgia, Mississippi. Nevada, New Jersey, North Carolina, South Carolina, Tennessee, and West Virginia have created commissions and task forces on the Holocaust. California Connecticut, Florida, Illinois, Massachusetts, New Jersey, New York, Rhode Island, and Washington State have passed laws requiring or encouraging that education of the Holocaust be part of the curriculum. The prescribed commissions and task forces are the sole bodies responsible for implementation. Many of the members of the task forces are volunteers.

The report also states that “eight states have statutes that specifically require or encourage instruction of the Holocaust be part of the state education curriculum.” Each state has curricula and learning standards for each grade level, with the task of curricula development delegated to educators, policymakers, and higher education content experts. Yet only the state of New York enforces its policies by — wait for it — reserving “the right to withhold public funds appropriated to schools that do not meet the curriculum requirements.”

Without any proactive enforcement, what good can these policies produce? What sizeable impact can be had? There’s wiggle room for teachers and educators to eschew Holocaust education, not necessarily out of malintent, but for convenience or pressure to “cover” major units of studies. The rationale is understandable, sacrifice this effectively optional state ‘encouragement’ for the more typical school curriculum, in preparation for State tests or other components of compulsive education. And this is assuming that teachers at the school level are even made aware of the requirements by their supervisors…

There is certainly visible variation in the productivity of the respective state commissions — New Jersey’s commission coordinates hundreds of programs annually for tens of thousands of students in grades K-12, per their 2016 report. But as a broad statement, the legislation around mandated Holocaust studies and implementation are feeble. Sometimes, ‘encouragement’ is not sufficient to motivate action. The Holocaust is irrefutably one of the most significant tragedies and genocides in history and the legislation passed and rhetoric by states reflects this basic understanding. But when it comes to remembrance through education, it seems that bureaucracy impedes effective and authentic implementation.

My personal Holocaust education has included my family’s visit to Yad Vashem in Jerusalem and the Museum of Jewish Heritage in NYC, hearing from survivors, reading testimonies, reading Night by Elie Wiesel and commemorating the Holocaust annually. The Holocaust means more to me than a chapter (or page) in a history textbook, and I hope for Jews and non-Jews across the nation to share this sentiment. But as of now, it appears that the majority of my generation of activists, entrepreneurs, and intrepid thinkers may be losing an essential component of American and global history.

Noah Phillips is a young writer with a particular interest in Jewish/Israeli affairs. He writes a column for Elder of Ziyon and is the founder of the Jewish Post, an online Jewish political magazine. Follow Noah on Twitter @noahaphilli