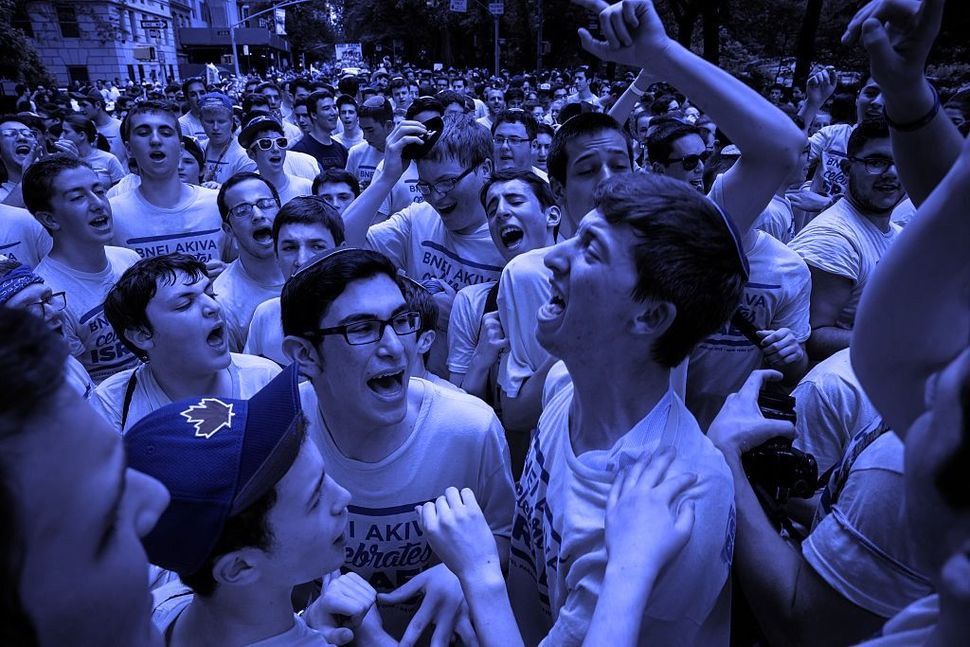 People take part in the Celebrate Israel Parade along Fifth Avenue May 31, 2015 in New York City. Despite thunderstorms in the area, tens of thousands of spectators were expected for the march, which has been held for each of the 50 years of Israel’s existence. Image by Getty Images 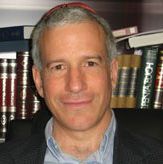 I recently chaperoned the senior class of my Jewish high school on their heritage trip to Poland and Israel. At virtually every stop along the route in Poland, which included the Maidanek and Aushwitz concentration camps along with the Schindler factory, the kids wanted to sing Am Yisrael Chai, “The people of Israel lives.” I, of course, sang along. What could be more appropriate for living, thriving, proud young Jews to sing while marching through the camps that were meant to destroy us? We’re alive, and that’s worth celebrating.

In Israel, however, the song seemed less like a proud statement of fact and more like a political ideology. We participated in the second leg of the March of the Living — a short walk on Israeli Independence Day from a pedestrian mall to the Kotel, along with 25,000 other Jewish teens from all over the world. As we congregated and prepared to march, several groups of Israelis hopped through the crowd, hyping us up with drums, dancing, hand claps and songs. Just about every fourth song was, again, Am Yisrael Chai.

Being alive, we seemed to be saying, justifies our existence, validates our claim to the land of Israel, calibrates our moral compass and unifies us as a people. It’s the sweaty, pep rally form of Fackenheim’s 614th Commandment to never give Hitler posthumous victories. But it’s Fackenheim on steroids, drowning out every other unifying Jewish idea.

But what connects us as a people nowadays? It’s not Torah law, Jewish Law or matrilineal descent. It’s not even Zionism, liberalism or any particular post-War Jewish ideology. Because we interpret them in so many different ways, not even our Jewish stories bring us together anymore. Among the caring, engaged Jews, all that really binds us is an Am Yisrael Chai Judaism — the celebration of creating a Jewish state after the Holocaust, that defibrillating burst that brought us back to life and still energizes us today.

For many mainstream Jewish organizations it’s an overt and desperate message — you should join us, or donate to us, because we will keep the Jewish people alive. But why do we need so many new Jewish social justice agencies and acronyms? Consider the primary activities of these groups: marching, advocating, farming, protesting, young folks chaining themselves to the entrances of an AIPAC conference. I’m calling the phenomena Am Yisrael Chai Judaism, a desperate shout of “we are here and alive!” But I could also call it pep rally Judaism, gathering folks together for the sake of the gathering. It’s what connects the AIPAC and JStreet conferences to If Not Now rallies to the March of the Living. We’re here and we’re loud — and alive.

There is a solid, non-trivial textual basis to this, beyond the song. Deuteronomy commands us to “choose life,” and that’s exactly what we’re doing. More powerfully, there’s a fascinating Midrash on the midwives’ narrative from Exodus. When the midwives explain to Pharaoh why they were unable to kill the Israelite boys, they say of the Israelite women chayot heinah — “they’re like animals” — that is they give birth so quickly, the midwives can’t make it in time. But the Midrash points out that the Hebrew word for animals — chayot — contains the root chai, meaning “life.” So the midwives are really hinting to Pharaoh that the Israelites are “lively” — filled with life. You’ll never be able to kill them, they’re saying between the lines, because the spirit of life is too strong in them. Am Yisrael Chai.

And it works, I suppose. No one participating in the March — or an AIPAC conference, or any truly lively contemporary Jewish experience — can fail to be moved by the enthusiasm that suddenly conquers the room. Nevertheless, I have reservations. Some of it is simply personal. An introvert myself, I’m rarely up for the circle dance feeling so many of these experiences demand. During the raucous march to the Kotel, I had to fight the urge to grab a few students and study a page of Gemara. As inspiring as Am Yisrael Chai can get, it’s not thoughtful or nuanced.

More seriously, there’s a moral lacuna in Am Yisrael Chai Judaism, a tendency to focus solely on ourselves and what keeps us alive. One of the reasons American Jews ignore news from Gaza, as Peter Beinart recently pointed out in Forward, is because it interferes with our pep rally. It’s not so much that we’re on the wrong side ethically when it comes to Gaza, it’s that we’re on the blind side; we don’t see it because we’re too busy celebrating life. In Israel, Am Yisrael Chai Judaism contributes to a disturbing illiberal wave that demonizes African migrants and ignores human rights violations in the territories.

There must be a way to combine a thoughtful moral critique with our restless vitality. Perhaps that’s the task of the next 70 years. Am Yisrael Chai, of course. But then what?