Would The Torah Be Different If Written Today? 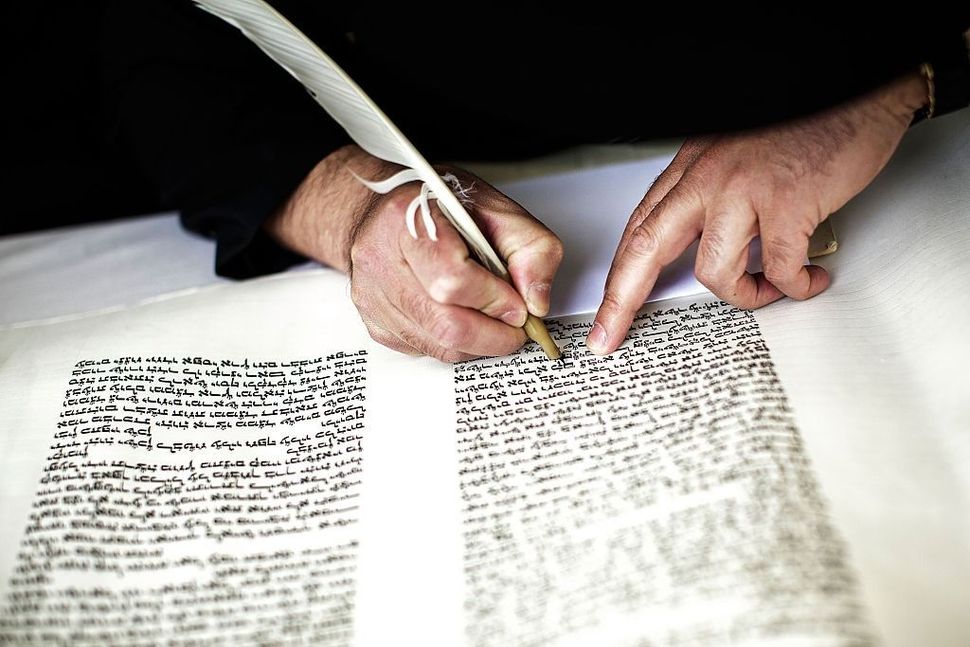 A scribe pens the final letters on a newly dedicated Torah scroll in the Chabad Synagogue on May 7, 2015 in Berlin, Germany. The ceremony will take place on the Jewish holiday Lag Baomer. The dedication of a new Torah scroll is traditionally celebrated with a great feast. This tradition has its origins in the biblical story of King David, who welcomed the Holy Ark of the Covenant in its capital. Image by Getty Images

The Torah is a chameleon. Its words, its laws, its protocols and its dictates all reflect the color of the environment in which it was written.

One imagines, though, that God Himself is a constant — what He wanted from mankind during biblical times is the same as what He wants from us today. Or is it? Even within the Torah, God changes. His will does not seem to be immutable. He once wanted to completely destroy the world, yet relented given the pious actions of Noah. Years later, He wanted to destroy all of the Israelites, but was argued out of it by Moses.

Our Torah lives on, but the work itself has a beginning, a middle and an end. Perhaps if God had continued through the ages to speak to the Jewish people, as He did when the world was first conceived by Him, the Torah would be different. Traditionalists believe that each of God’s edicts would be precisely the same today. But for those who find at least some of His commandments abhorrent, or at least contrary to mores in today’s milieu, one must wonder if God would indeed command them were He transmitting the Torah today. And what would that mean to us about God?

I suspect many others of us might conclude that, if handed down today, God’s Laws would be different. Do we really believe that God appears to us in the same way He directly engaged with Moses 3,500 years ago? In truth, we don’t know exactly what He meant or intended. The Rabbis tell us how to interpret God’s Law and His thinking. And so it may be truly hard for us to individually understand how God’s thinking today differs from yesteryear.

Certainly, there are some Laws we just can’t reconcile with our world. Would the Torah of today legislate what is ostensibly a secondary status for women? Would the Torah of today permit polygamy? Would slavery of any kind be acceptable? Would love of God be best “proven” by sacrificing animals in His name? Would homosexuality be a cardinal sin that warrants a death sentence? Would the Jewish people be instructed to annihilate other nations they might encounter en route to the Promised Land — men, women and children alike, if they believe in and worshipped idols in our presence? Would a man who gathers wood in the public square on the Sabbath be assigned to die? Would God demand mass death for those who worship a golden calf, honestly believing in their weakened state that God (and/or his prophet Moses) simply abandoned them? Would God so strongly honor a vigilante who violently kills a man and his mistress, even for their loathsome sexual offense that defied the sanctity of the Tabernacle?

Of course, atheists and agnostics would argue that the Torah wasn’t actually written by God, but rather by man. There are those who would say the Torah is completely man-made, devised without God to impose rules upon society. Some skeptics who believe in God but challenge the Torah’s provenance might argue that man authored the Torah — with God’s blessing, or at least indulgence.

Surely, we cannot begin to fathom what the Torah would be like if Moses were standing today upon Mt. Sinai, or wherever else Moses were to bring his laptop in order to record his commune with God. One suspects, though, that the product would be different: more nuanced, less judgmental, less physical, more modern — whatever that might mean.

Maimonides’ 9th of 13 Principles of Faith states that the Torah shall not be altered, even by God: “I believe with perfect faith that this Torah will not be changed, and that there will be no other Torah given by the Creator, blessed be His name.” Thus, our Torah, now in our hands, is the identical one given to Moses. And, Maimonides tells us elsewhere, those who fail to obey the Torah’s commandments shall be denied their place in the World To Come — even though the Torah itself doesn’t tell us that.

It is, for me at least, worthwhile to muse over what the Torah would look like if it were given to us today; but all we can do is imagine for ourselves.

Perhaps, just like one prays daily to “restore our judges as in former times,” one might consider praying for a Torah that is simply “kinder and gentler” — as perhaps God originally intended it before His conception of the world was beaten down by the conduct of a wayward people.
Of course, the Torah itself will not be changed from what it was as given at Sinai. And so, we each need to live a Torah life as we singly understand it in the moment — whatever that might actually mean for us individually.

Would The Torah Be Different If Written Today?