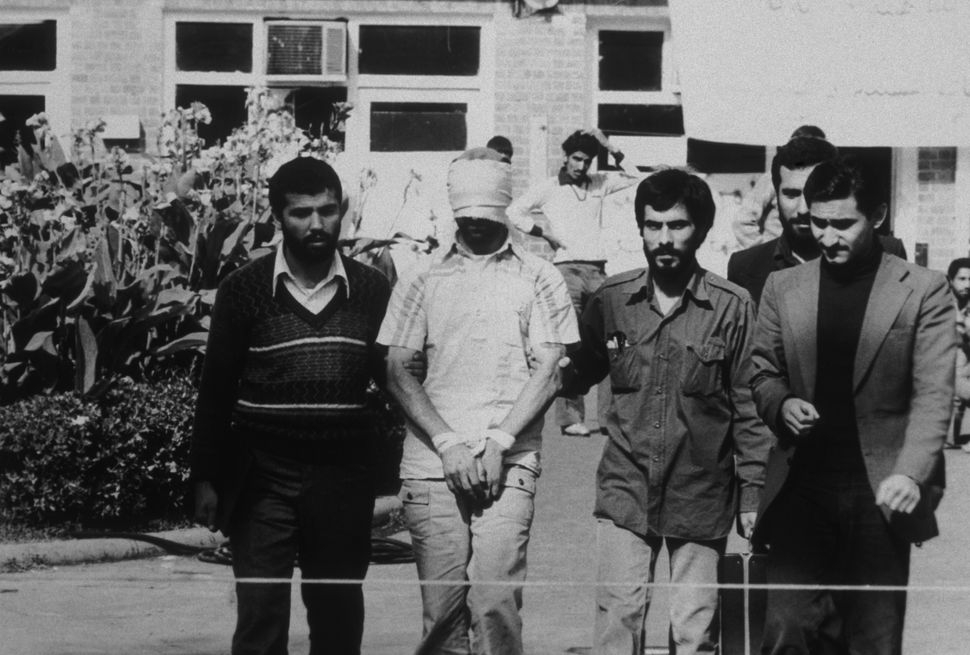 An American hostage being paraded before the cameras by his Iranian captors. Following the Iranian revolution over fifty American hostages were taken and only released after four hundred and forty-four days. Image by Getty Images

President Trump announced the U.S. withdrawal from the Iran Deal on May 8. The following day marked a very painful anniversary for many Iranian Jews worldwide: 39 years since the unjust execution of our community leader Habib Elghanian at the hands of the current Iranian regime and Ayatollah Khomeini.

While many American Jews may not remember or even know who Elghanian was, to my community of Iranian Jews, he was a remarkable leader whose execution sparked a mass exodus of Jews from Iran. Elghanian’s brutal execution has left a painful scar in the hearts and minds of countless Jews who fled Iran after the current Islamic regime came to power. After more than 2,500 years of living in Iran, we Jews were suddenly and violently uprooted in massive numbers. 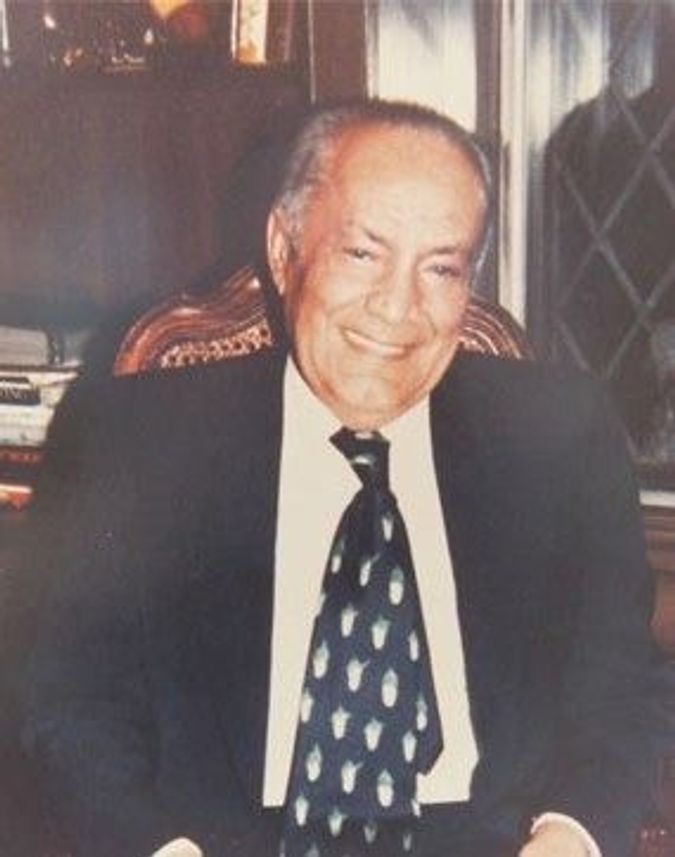 With many American Jews supported former President Obama and other prominent Democrats who backed the Iran Deal three years ago, the American Jewish community needs to wake up and realize that this regime is seeking a second mass genocide of the Jewish people. The time has come for American Jews to remember Elghanian’s shameful killing by the Iranian regime — and to understand it as an example of the regime’s undying hatred for Jews.

Habib Elghanian was the leader of the Jewish community in Iran, and among the most affluent industrialists. He and his business-savvy brothers pulled themselves out of the poverty-stricken Jewish ghetto in Tehran to become successful captains of industry in the country. He was not only a proud Jew but a proud Iranian nationalist who believed in helping the nation of Iran grow and prosper during its age of modernization. He not only built the first modern high-rise in Iran in the early 1960s, but also hired thousands of Iranians of all faiths in his many industrial companies. Along with his business success, Elghanian was quite philanthropic towards Iran’s Jews and non-Jews. He even contributed financially to the building of a mosque in Tehran, upon which construction had stalled because the builders had run out of money. For nearly two decades, I have interviewed scores of friends, family members and colleagues of Elghanian who swore that he had an unconditional generosity towards anyone who sought financial help from him, for a worthy cause or a person in need.

Elghanian saw himself as a shepherd for the nearly 80,000 Jews of Iran living as minorities in the country. When the Shah of Iran fled and the country was plunged into chaotic riots and turmoil, Elghanian, who was outside of the country, returned to Iran. Despite his friends, family and even the Prime Minister of Israel Menachem Begin pleading with him not to return to Iran, which had fallen into the hands of the radical Shiite Islamic cleric Ayatollah Khomeini, Elghanian nevertheless returned. He told everyone, “what have I done wrong or illegal in Iran during my life to worry about my own security? I have done nothing wrong to the country but only helped it in many ways. As the leader of the Jews in Iran, I have a duty to return to help them.” This mistake by Elghanian cost him his life. He was arrested a few months after returning to Iran, which was now ruled by Khomeini’s new radical Islamic regime. The regime in Iran viewed the Jews as third class citizens who were inferior to Muslims in the country and stripped away any protections they might have enjoyed during the Pahlavi dynasty. Elghanian was tried in a twenty-minute sham trial and then promptly executed by a firing squad on baseless charges of being a supposed “American and Zionist spy.” His assets and those of his family members were confiscated by the new Islamic regime of Khomeini. The regime also confiscated the assets of countless other prominent and affluent Jews in Iran during this time on the guise of being spies for America or Israel.

The Iranian Jews I’ve interviewed who lived in Iran during the Elghanian execution speculated that the single reason for his killing was to strike fear in the heart of every Jew living in Iran. It was believed that the new radical Islamic Khomeini regime detested the Jews of Iran on religious grounds, but also because of their tremendous wealth and successes as entrepreneurs. The ayatollahs who had taken over Iran knew that the most effective way to get rid of the country’s Jews and to confiscate their immense wealth was to execute their most beloved leader, Habib Elghanian. And without a doubt, the execution of Elghanian caused tremendous widespread panic amongst Iran’s Jews, many of whom quickly realized that their own lives were at risk. As a result, thousands of Iranian Jews promptly sold their assets at bargain prices, and others just fled Iran, leaving behind their assets and properties for fear of lives.

After more than 2,500 years of living in Iran and enduring horrific pogroms, rapes, forced mass conversions, daily harassment and killings, this once ancient Jewish community had finally become uprooted and forced to flee the country. Elghanian’s unjust execution proved that Iran was no longer a safe place for Jews to live, and the new Khomeini regime still continued to randomly arrest and execute more Jews. The arrests and executions of Jews caused massive waves of Jews to flee the country during the last four decades, to the point where today there are perhaps 5,000 to 8,000 Jews left in Iran. Aside from Elghanian, other Jews in Iran have been arrested on false charges of spying for America or Israel and tortured in order for the Iranian regime to force them to hand over their wealth and properties. According to a 2004 report prepared by Frank Nikbakht, an Iranian Jewish activist and head of the Los Angeles-based “Committee for Minority Rights in Iran,” since 1979, at least 14 Jews were murdered or assassinated by the regime’s agents. Likewise, 11 Jews have disappeared after being arrested, at least two Jews died while in custody and another 11 Jews have been officially executed by the regime. In 1999, Feizollah Mekhoubad, a 78-year-old cantor of the popular Youssefabad synagogue in Tehran, was the last Jew to be officially executed by the regime, the report stated.

Still, after 39 years, the Iranian regime has not apologized for wrongly executing Habib Elghanian. This regime in Iran still continues its disgusting campaign of Holocaust denial and funds notorious anti-Semitic Holocaust denial historians living in Europe. This Iranian regime still calls for the annihilation of the Jewish homeland of Israel. This regime in Iran has leaders who put on a false façade of “loving Jews” and fake smiles before Western news cameras by claiming they “respect the Jews,” when in reality they have not changed their murderous ways and their fervent anti-Semitism as only grown.

My Ashkenazi brethren living in America, I ask you very simply: how can you support a deal with this murderous regime in Iran that has sworn to destroy the Jewish people?

After six million of our brethren were slaughtered at the hands of Nazis more than seven decades ago, we cannot ignore or disregard the massive anti-Semitism and Holocaust denial campaigns carried out by the Iranian regime. We cannot afford to ignore the Iranian regime’s daily calls for Israel’s destruction. The Iranian regime has very openly and proudly displayed their long range ballistic missiles which have Farsi and Hebrew writing on them calling for Israel’s destruction. Is there no other more clear display of the regime’s very real genocidal threat against the Jewish people? Let us not fool ourselves: when the Iranian regime says it wants to “wipe Israel off the map,” it means they want to slaughter Jews on a genocidal scale. The Iranian regime’s threats must be taken seriously because their actions also speak volumes. When we say “never again,” it must also apply to the threat of genocide coming from the Iranian ayatollahs.