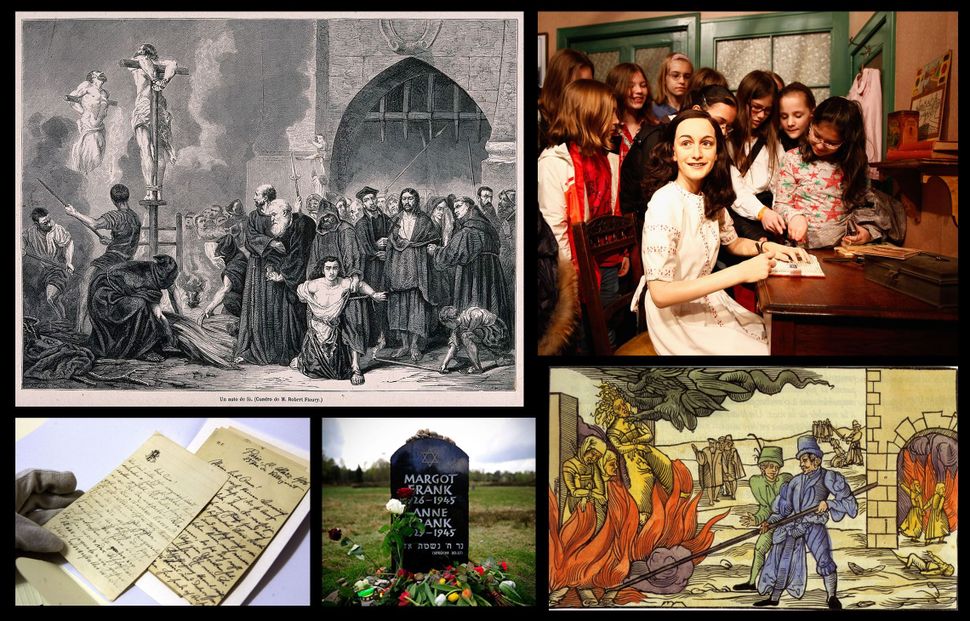 Myths and martyrs hold significant space in Jewish storytelling and Jewish belief, and there are no two texts that prove this quite like “The Diary of Anne Frank” and the “Memoirs of Luis de Carvajal, El Mozo.” Anne Frank was one of eight people captured by the Nazis in the Secret Annex, and Luis de Carvajal was likewise burned at the stake with eight others who were accused of being Crypto-Jews. Both documents were written as a direct reaction to their anti-Semitic environments: More than three hundred years before Anne Frank lived, Luis de Carvajal, El Mozo, wrote his memoirs as a kind of spiritual travelogue before he was burned at the stake during the Spanish Inquisition. Anne Frank’s diary was composed in Amsterdam from 1943 to 1945 during the Nazi occupation. Though both of these written works chronicle different time periods, different characters and different conditions, the authors were tortured and killed for the same crime: being Jews.

But as tragic as the stories are on their face, both accounts leave room for readers to embellish — and embellish we do. Since the deaths of their respective authors, both diaries have been transformed into optimistic tales of hope — the plots have been changed, the endings have been changed, and so, too, have the messages. Because both written accounts leave out the gruesome endings, we are able to alter both to suit our aims. Anne Frank’s anguish and unspeakable death is turned into an optimistic tale about our collective humanity. By following Carvajal’s life before his capture, we avoid thinking about his own scorching reality. What is the story of a book with no ending? What is the ending of a book with no ending? Is it a Hollywood film set in which the bookcase opens to reveal young love? Is it a museum display focusing on the handwriting of a heroic martyr?

On October 6, 1997 The New Yorker published an article by Cynthia Ozick titled “Who Owns Anne Frank?,” which started a conversation about what the historical document actually says — and how it’s been twisted in successive generations. Ozick accentuates not only the true nature of the diary itself, but also the crimes against the truth that have been committed in its retelling. Ozick challenges the readers of Anne Frank’s diary to think in terms of hard evidence: In its raw form, this diary was no love story, no shallow attempt at forgiving the world; this was a young girl’s attempt to stay sane while hiding from her death.

The myth of Anne Frank has been built up since the diary’s first publication. Ozick points out that Anne Frank is remembered by one particular quote from her diary: “I still believe, in spite of everything, that people are truly good at heart.” We want to believe this quote, for it paints the rosiest picture of our reality. But this quote, taken out of the context of what was going on in the world at the time, forces us to believe what we want to believe. Seventh graders across to globe are asked to read Anne Frank precisely so they can absorb the message that “people are good at heart.” Some may even be bold enough to call Anne a “hero.” The implication is that Anne Frank died and her diary was published so that it could change minds.

Does this make Anne Frank was a martyr? 1.1 million people were murdered at the Auschwitz concentration camp during the Holocaust. At the entrance to the gates of Auschwitz is a sign that reads Arbeit macht frei, work will set you free. Have the readers of her diary been led to believe that Anne Frank, upon her entrance into Bergen Belsen, spread her arms against a cross and forgave everyone as she bled? We must go back in time in order to prove that these false analytical readings did not begin with Anne Frank. Instead they began centuries before her, when the memoirs of Luis de Carvajal El Mozo were first discovered.

What do both of these stories say about perception? What do they reveal about what society selectively remembers? When we mourn the dead on Yom HaShoah, Holocaust Remembrance Day, is it the story we remember, or the suffering? Are they the same thing? And if we teach the next generation through storytelling how can we create a genuine account in order to ensure that the vicious realities of the past are not made into fluff for a Hollywood courtship or a $20 museum exhibition entrance fee? How can we be candid in out retelling of tragedy? How can our anecdotes remain authentic?

The outside world was largely inaccessible to Anne Frank and Carvajal. Frank was locked inside a tiny room, while Carvajal hid his Judaism and thus hid his true self. However, both young writers felt that they could access the outside world through pen and paper. In 1596, Carvajal wrote of hiding and then of being discovered during his first arrest when soldiers of the Inquisition entered into his mother’s house to take her away. Seymour B. Leibman’s translation of Carvajal’s memoirs illustrate this point: “What grief-stricken mother must have felt is left to the imagination of the reader. After they took her away, they arrested me, finding me behind the door where, for fear of those cruel tyrants, I had hidden myself.” Here, Carvajal addresses the reader directly. We have a notion that he knew his work would be published and we have a glimpse into the reality of a capture. Although his writing is more straightforward and less pensive than Anne Frank’s, he seems to desire publication because he gives the impression of survival being inevitable. He seems confident that the Lord is on his side and has seen him through his first capture — so why not his second?

Anne Frank’s diary changes toward the end as well. It has a similar penetrating voice of confidence. By May of 1944, Anne begins to speak to “Kitty,” her diary, as if knowing she will someday publish a book: “In any case, I want to publish a book entitled ‘Het Achterhuis’ [The Secret Annex] after the war. Whether I shall succeed or not, I cannot say, but my diary will be a great help.” The longing, the hope and the necessity of publishing her own work is what makes Anne Frank’s diary that much more despondent. As Frank documents her dreams, the Nazi party documents human “goods.” As Carvajal recalls the memory of capture as if he will escape his fate every time, his memoirs become morose.

The same can be said for Carvajal. The Jews of the Spanish Inquisition were being hunted not by S.S. officers, but by what would be equivalent to them during the fifteenth and sixteenth centuries. No Jews were to be allowed into New Spain (Mexico), not even conversos, those Jews who had sworn themselves over to the Christian faith. However, by the late sixteenth century, there already existed a community of crypto-Jews in Mexico City. The punishment for heresy during this time period was, similar to Anne Frank’s outcome, a form of torture and death. Jews were burned alive, and usually died from combustion before they died from the flames. Thus Frank and Carvajal were both gassed in different ways.

Both “The Diary of Anne Frank” and “The Memoirs of Luis De Carvajal, El Mozo” become autobiographical works that demand imperishability through collective memory. They are testaments to their times, but also to our times. They ask their readers to remember. They ask the reader to never forget. The entries of everyday monotony set down by both Frank and Carvajal are designed as a mutiny against forgetting. And so it is our responsibility to remember, to cure our societal fugue, to teach our future generations that sometimes a diary is the only way out — and it’s also our only way in.