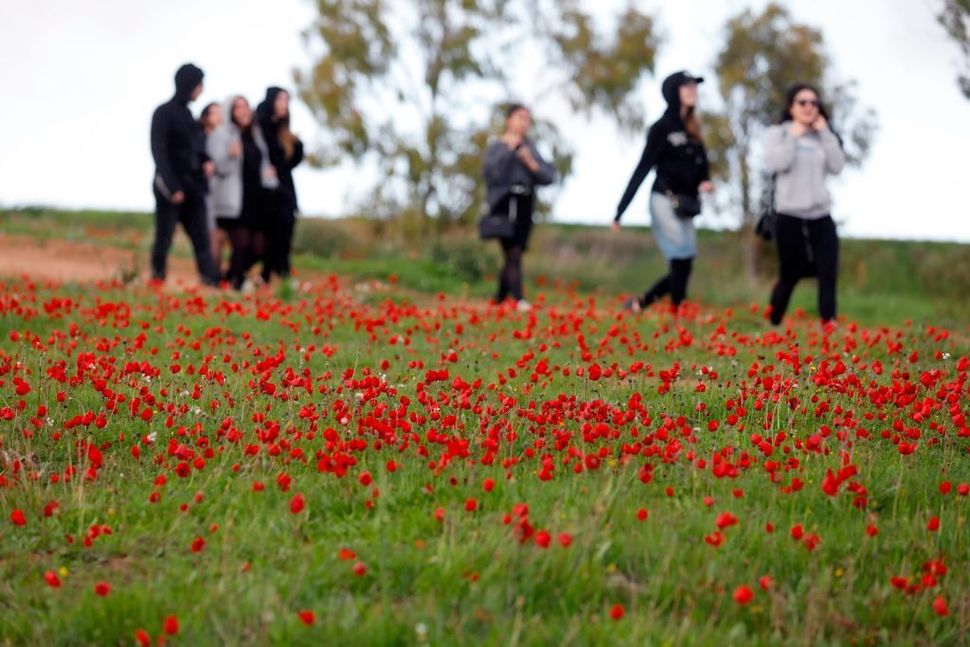 Tourists walk in a field of blossoming red Anemone coronaria flowers, around Kibbutz Alumim near the Israeli border with the Gaza strip, on February 13, 2018. Image by Getty Images

As I write these words, my 14-year-old daughter is in Israel with her eighth-grade day school class. I don’t know what to think about the trip. Are such trips a good idea for American Jews? Is it something I should welcome for my daughter? How much laundry will she bring back?

I don’t have answers to all these questions, but I do have an approach to making sense of my internal conflicts. It’s simple, doesn’t involve yelling at anyone or feeling guilty, and it might be effective in clarifying your own priorities for your own, or your child’s, Jewish and American life.

The pioneer of trips to Israel by American Jews was Hebrew Union College, which started Israel trips for their students in 1970. (Many Americans, including my parents, participated in year-abroad programs at Hebrew University in Jerusalem in the 1960s. That’s where they met, so I myself am the child of the phenomenon.) Thereafter, the first middle and high schools introduced Israel trips into their standard curricula the late 1970s. For example, the Charles E. Smith Jewish Day School, a pluralistic K-12 school in Rockville, Maryland, says on its website that its 12th-grade class first visited Israel in 1978.

Now such trips are popular, especially among the Schechter schools of the Conservative movement. The selling points of such a trip are clear: the exposure to Hebrew; the bonding experience for students; the chance to see in the flesh what they have only read about; the first lasting impression of Israel.

This is where my helpful question comes in handy. What is the point of the trip (or whatever educational or Jewish initiative you are discussing)? You can ask the question as many times as you need until you’re satisfied. The trip is good because it encourages “support for Israel”? Terrific, but what’s the point of such support? If you, yourself, don’t need to ask this question because support for Israel as it is now, per se, is a primary goal for you (and you don’t need to ask what such support might entail), we’re going to disagree: but for your own familial and parenting needs, that might be enough. Similarly, if fostering a connection to Israel, or imbuing children with Zionism, are goals that are specific and meaningful enough for you, you might not need to question the popularity of such trips.

But there’s plenty that’s problematic about Israel from the point of view of someone like me, a supporter of two states, Israel and Palestine, living together in peace. The sticking point, of course, is what kind of Israel we’re talking about. No nation-state that I know of treats minorities with consistent morality and humanity, but it has long been clear to me that Israel must stop the occupation, together with its single-minded oppression and often violent dehumanization of Arab citizens and Palestinians under its control. Religious pluralism, though of lesser moral importance in my book, is another area in which the current state falls short, and I’m nauseated by the expansion of right-wing fundamentalism coupled with territorial revanchism.

I understand there are many, even at my eighth grader’s current school (which we love), who might not agree with my Israel politics. But that’s all the more reason to have a real conversation about what we want our children to be learning about Israel, and what the underlying motivations are for a trip. If it’s to have them stand on Masada misty-eyed in the sunrise and eat falafel on Ben Yehuda Street, that doesn’t seem to either be worth the thousands of dollars parents spend on such trips (the rise of the Israel trip obviously dovetails with affluence as a marker of observant Jewry in the US) or align with what I’m trying to each my children.

There are non-Zionist directions to take, of course. I have friends who consider Israel’s very existence to be illegitimate, based as it is on an expropriation of Palestinian territory. I disagree, partially because I don’t think a single-state solution is feasible or preferable, and because I don’t think any modern political entity is free of shocking immorality. Even so, such opponents of Israel have much to contribute to an honest discussion about what our children should be learning in Jewish schools, and whether a trip to Israel makes sense. For example, a class trip focused on the Palestinian experience, based on Jewish legal texts, news accounts in Hebrew and English (or Arabic), and actual conversations with Jews and Palestinians, would be an enlightening option, perhaps including the many works of contemporary Israeli culture confronting Palestinians’ suffering.

Anyone with kids has already rolled their eyes at my objections. They know that my daughter’s experiences and impressions of Israel are nothing I can dictate. I know perfectly well the phrase “parental control” is an oxymoron, and most likely she’ll just have a great time (her Whatsapp messages confirm that). But that is part of the conflict. I have no chance of remaking Israel, but my children can contribute to that effort. If I hope for them to eventually be involved in the betterment of the Jewish state, I must not wash my hands of Zionism, but carefully consider what they are learning about Israel, so the nation can be one of peace, compassion, and prosperity for all its inhabitants and neighbors.

Our children need to learn about Israel’s faults, at home and abroad, and we need to make that an integral part of their Jewish schooling. I bet I’ll spend more time doing my 14-year-old’s laundry when she comes back than talking about the philosophy of Zionism, but I can still be deliberate in teaching her — and my other kids — about a moral vision for Israel and Palestine, future trips or no.