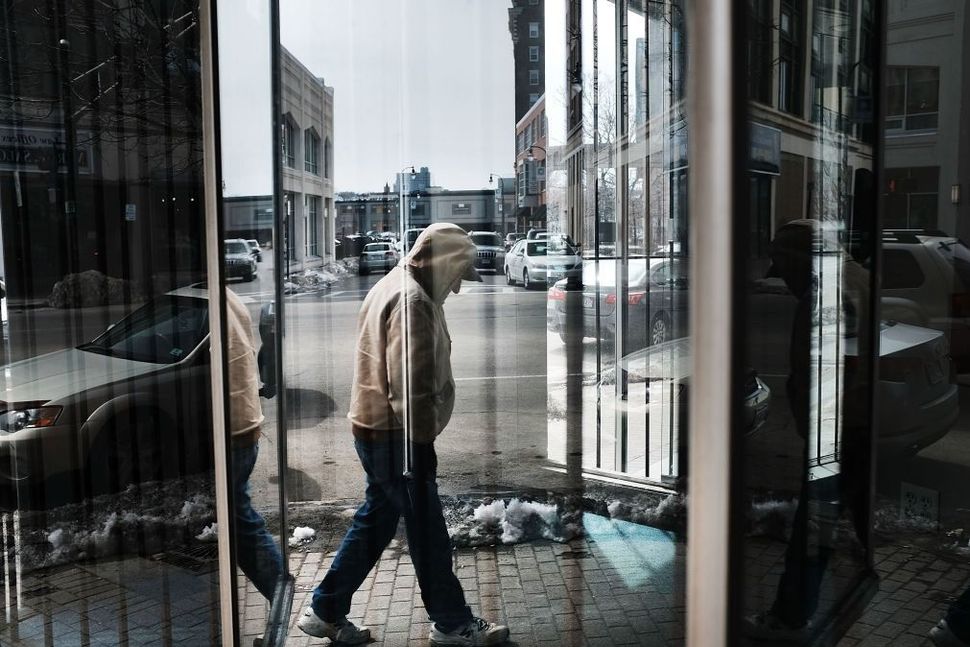 A man walks through an economically stressed section of the city on March 20, 2018 in Worcester, Massachusetts. Image by Getty Images

Why are people poor?

It is, on the face of it, a simple question. People are poor because, in comparison to other people, they have less money.

But the question is often asked in moral terms.

American political discourse, especially in conservative circles, views poverty as a moral failure of the poor themselves.

Tragically, this rhetoric is often peddled by those who call themselves “religious,” such as when Albert Mohler, president of Southern Baptist Theological Seminary, writes that poverty is “deeply rooted in morality — often, as the Bible makes clear, in unwillingness to work, in bad financial decisions or in broken family structures.”

But is that true?

Not so much in the Jewish Bible. The Torah makes numerous references to poor people, but only in the context of larger economic structures. And while Judaism does not idealize poverty, Jewish texts frame poverty as a failure of those who hold more power within economic structures — namely employers, landlords, and policy makers.

In other words, Jewish texts see a moral obligation inherent in the persistence of poverty.But it is an obligation on those who have more, not less. Which is why, as a rabbi, I’m so heartened by the emergence of the Poor People’s Campaign’s current 40 days of activism, reframing the moral discussion around poverty. It’s activism that defies the conservative insistence that poverty is the fault of the poor themselves.

Consider the following myths many conservatives hold about poverty which are contradicted by Jewish text:

Myth 1: Poor people are the ones responsible for their poverty.

Some religious traditions judge the poor to be possessed of a spiritual failing. But the book of Deuteronomy (24:15) puts a moral obligation not on the working poor, but on their employers. “Give [the impoverished worker] his wage in his day,” the employer is commanded, “for he is poor and lifts his soul up for it.

The consequence is a serious one, framed in the context of religious obligation. If you fail to pay your worker a fair wage, the employee “will cry to God and it will be accounted to you as a sin.”

The sin will be accounted to “you,” the employer — not “you,” the low-wage worker.

In justifying a recent proposal to triple the minimum monthly rent in federal subsidized housing, HUD Secretary Ben Carson claimed to be guided by memories of his neighbors in Detroit who relied on government housing.

“They don’t know any other lifestyle.”

The implication is clear: Poor people live a faulty lifestyle.

But Rabbinic commentators look at the aforementioned text from Deuteronomy, and see in it a deep critique of unfair labor practices. The medieval Castilian rabbinic commentator best known as the Ba’al HaTurim looks at Deuteronomy and notes that workers “entrust the employers with their lives, as they depend on that prompt payment to satisfy their most basic requirements.”

Rather than castigating the poor for their delinquent “lifestyle,” the Ba’al HaTurim takes unethical employers to task for nothing less than stealing lives.

Myth 3: Personal difficulties like job loss and evictions are symptoms of moral failure.

Conservative evangelicals are the main practitioners of a peculiar theology known as “prosperity gospel.” It posits that if you’ve suffered a personal crisis, it’s most likely due to your failure to pray, or in some other way lead a moral life.

Consider, for example, this advice to the poor from HUD Secretary Carson: “My best message is to ask yourself: What is your goal in life, and what is your goal for your children?”

The rabbis of the Mishna, for instance, explicitly prohibit evictions for half of the year (Bava Metzia 8:6), between the “[Fall] holiday of Sukkot until the [Spring] holiday of Passover,” adding that in large cities tenants must be “given a year’s notice.”

The responsibility to live a moral life is not placed on the poor tenant, but the landlord.

Myth 4: Economic stresses like the American housing crisis are unavoidable in a free market.

Conservatives love to extol the virtues of the self-made man who has exploited the market to his advantage. But the Torah warns of the dangers of excess wealth accumulation. The rich are cautioned not to forget God and falsely claim, (Deuteronomy 8:17), “My own power and the might of my own hand have won this wealth for me.”

It’s no surprise, then, that Jewish text puts limits on market forces. In the Talmud, for instance (Bava Metzia 101b), Rabbi Nahman objects to indiscriminate rent increases, and he does not mince words. Squeezing more money out of a poor tenant — say, for example, by tripling his monthly rent without notice — “is like holding him by the testicles to force him to give up his cloak.”

The Talmud further insists, “this [ability to raise the rent] applies only if housing costs [in general] increase.”

Jewish texts are consistently clear: if you have more economic or social power, the more the moral burden is upon you. Being an employer does not mean you can be an exploiter, thinking only of yourself and neglecting your community. Owning property does not mean favoring the wealthy newcomer over the longtime resident, or jacking up rents, or getting rich and getting out. It means honoring a holy responsibility to help foster a holy community, for all residents, for all neighborhoods, and — we pray — for all time.

Like God provides housing for Adam and Eve in the garden, providing a home is a holy act.

We are currently in Week Five of the call for “40 Days of Moral Action” on behalf of the Poor People’s Campaign — 40 days of nonviolent resistance, calling on our country to uphold the true moral call of the Bible. Numerous Jewish organizations, such as Truah: The Rabbinic Call for Human Rights, are partnering with the Poor People’s Campaign to challenge moral failures like “economic exploitation, exclusion, and deep inequality.”

Ronald Reagan once declared, “within the covers of the Bible are all the answers for all the problems men face.”

What if we actually embraced the biblical imperative to create economic justice? What if we rejected the idea that to be poor was a moral failing? What if we instead focused on the moral failure of employers or landlords who think only of themselves and their bottom line?

What if we were finally honest with each other, and ourselves, and admitted that the plain reason people are poor is that they are paid too little and their housing costs too much?