Can The Torah Help Us Overcome The Temptation Of Instant Gratification? 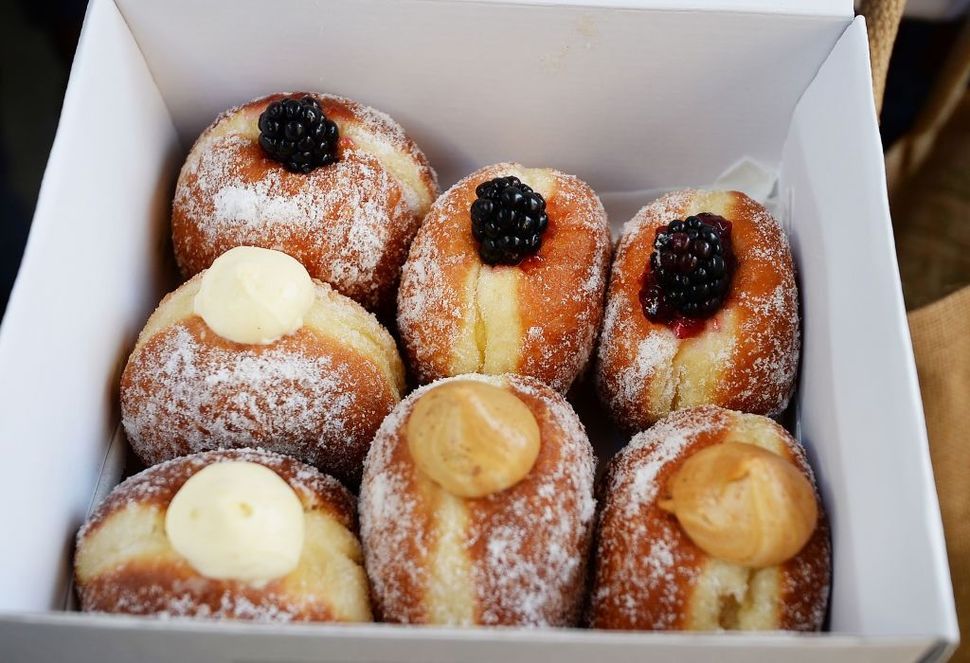 he box of doughnuts bought by Prince Harry at the Bread Ahead as he toured stalls during a visit to Borough Market which has opened yesterday for the first time since the London Bridge terrorist attack on June 15, 2017 in London, United Kingdom. Image by Getty Images

I think we can all relate to the challenge of overcoming the lure of instant gratification. Whether it’s the magnetic pull of the glazed doughnut, the couch or a forbidden act, exercising self-control is one of the greatest challenges of life. And generally, we stink at it!

“individuals discount (devalue) too strongly future rewards and overemphasize near-term pleasures. When we can hold all alternatives at a distance, our evaluations of them remain true to their values in our lives. But our subjective evaluation of a reward (our appetite for it) grows when we are closer to the reward than when we are far away, and unless we somehow commit ourselves to our previous preferences, we succumb. This inconsistency rests on an illusion that we all experience every day. For example, imagine you set your alarm clock at midnight to wake up at 6:00 a.m. the next morning. But when the alarm goes off, the choice that you made last night now ‘seems absurd.’ The warmth and comfort of the bed makes you change your mind. What was chosen the night before is now rejected.”

When faced with the potential joy of immediate gratification, our trusty decision making skills and rational thinking go out the window. In just a matter of seconds, we transition from rational actors to irrational actors. It’s no wonder that humans struggle so mightily with the forces of procrastination, overeating and addiction!

To address this problem, researchers in the social sciences suggest meeting the allure of instant gratification with another immediate pleasure or pain that encourages self-control. My father, an avid student of behavioral economics, established a rule for himself: He doesn’t allow himself to listen to his beloved podcasts except at the gym while working out. Suddenly, relaxing on the couch didn’t look as appealing!

Behavioral investigator Vanessa Van Edwards has a particularly inventive pain-centric approach called Anti-Charity, in which you strengthen your resolutions and quiet the voices of mutiny in your head with a commitment to give a certain amount of money to a charity you abhor every time you break with your commitment. Will I smoke that cigarette if it costs me a $5 donation to a rival political party or social group you abhor? I didn’t think so! As crazy as it sounds, the immediate, painful realization that smoking one cigarette means supporting a horrible institution with a minimal donation resonates more in the mind than the long-term consideration that smoking will eventually kill you.

I can testify to the power of the Anti-Charity strategy. Because of the halachic issues involved in potentially donating to a damaging and sinful organization, my commitment involved a donation to a particularly disdainful political figure (the donation itself was not a sin, but it felt pretty bad nonetheless!).

For those newly attempting to adopt a Torah-observant approach, the religious life introduces loads of new arenas requiring self-control. What we eat, how we work, when we work, how we speak, what we look at, how we judge, how we react, what we wear and on and on and on are all governed by Jewish law. In light of the findings which demonstrate humanity’s trouble with properly evaluating near-term pleasures, I was curious about what the Torah’s advice for overcoming temptation might be, and if it addresses the central issues described by behavioral economics.

The Torah sources that immediately came to my mind were two mishnayot in Pirkei Avot (Ethics of the Fathers). The first mishna comes at the very beginning of the second chapter:

Based on what we have learned, this mishna’s advice seems, well, futile. Yes, a proper cost-benefit analysis of any particular sin or mitzvah should surely lead to a religiously sensible reaction, but human beings, as we have demonstrated, suffer from a serious inability to properly evaluate different options in the face of temptation. After all, how accurate are your mental determinations when your brain is flooded with a heaping pile of emotions and drives? (It is for this very reason, by the way, that another mishna in Pirkei Avot 4:23 warns us, “Do not seek to appease your fellow man at the time of his anger, or to comfort him when his dead lies before him.” For, as long as someone is shaken and agitated, he isn’t amenable to rational suggestions.) Thoughts of future divine retribution from an all-knowing God? For many of us, that’s way too far off in the future to inhibit pleasure-seeking in the present.

Here’s the second mishnah on the topic, found at the very beginning of the third chapter of Pirkei Avot:

“Akavia ben Mahalalel says: Keep your eye on three things, and you will not come to the hands of sin: Know from where you came, and to where you are going, and before Whom you are destined to give an account and a reckoning. From where did you come? From a putrid drop. And to where are you going? To a place of dust, worms, and maggots. And before Whom are you destined to give an account and a reckoning? Before the King of kings, the Holy One, blessed be He.”

The problems with the advice given in this mishnah are similar to the problems introduced with the first mishnah. Thoughts of one’s humble beginning and eventual end, as well as considerations of a future day of reckoning, are distant from life in the present, and therefore infinitely less persuasive. Such thoughts similarly require rational thinking processes, something humans carry in short supply during periods of enticement.

I knew there were vital points of consideration that would open up the gates of wisdom for me, but I didn’t know what they were. Luckily, I would soon find the missing link I was looking for in former Chief Rabbi of Israel Rabbi Yisrael Meir Lau’s magnificent commentary on Pirkei Avot. Rabbi Lau notes most interestingly that these mishnayot do not reference methods to avoid “sin” itself. Rather, they depict practices that would ward off “the hands of sin,” “li’dei aveira.”

Rabbi Lau: “In Hebrew, the word for hands can also mean handles. Sin is stored, so to speak, in a container whose handles are corrupt personality traits, such as ego and lust. The more pronounced these traits are in a person, the more he is prone to sin. When a person does not possess these handles, he will not come to sin” (Vol.II, p. 323).

According to Rabbi Lau, the advice laid out in these mishnayot was never meant to aid someone currently in the grips of sin itself. These mental considerations were rather intended for quieter, less turbulent times in one’s spiritual life. In moments of personal calm and quiet, far away from the intoxicating snare of the lesser angels of our nature, soulful contemplation indeed finds its place. Within these calm confines, thoughts of one’s purpose and place in this life, and thoughts of the consequences of one’s actions, have the ability to resonate deeply within us and potentially neutralize or, at the very least, lessen many of our worst personality traits which serve as the “handles of sin.”

This paralleles that which we referenced earlier from the findings of behavioral economics: “When we can hold all alternatives at a distance, our evaluations of them remain true to their values in our lives.” Like a healthy diet or regular exercise, which ward off obesity and the host of physical side effects that come with it, focused soulful contemplation acts as preventive medicine for the spiritual life, keeping the negative character traits which lead to sin at bay.

As far as what might stand in as curative medicine for the spiritual life, a Talmudic passage (Kiddushin 30b) seems to describe a panacea of sorts for the spiritually entrapped: “So says The Holy One to Israel: My children, I have created the evil inclination and I have created the Torah as its antidote.” And as the Talmud continues further on the page, “If this scoundrel (the evil inclination) accosts you (seeking to tempt you to sin), drag it to the study hall (and study Torah). If it is like stone it will be dissolved (by the Torah). If it is like iron it will be shattered (by the Torah).”

In this latter passage we find that the evil inclination is close at hand. It has, in fact, accosted you and infected you! Now you need a cure, or an “antidote,” as the Talmud calls it. This advice is notably unlike the advice given in Pirkei Avot. In fact, there’s no mention at all of any sort of silent meditation or contemplation to keep sin at bay. Rather, we are instructed to “drag” our evil inclination (nobody said this would be easy!) to the study hall and learn Torah.

Just as the findings of behavioral economics suggest, instant gratification must be met head-on with another immediate counterbalance that encourages self-control. In this case, that immediate counterbalance is Torah study, a spiritual shot in the arm and a bit of Godliness to dispel the powers of negativity and sin. In this emotionally charged space, we are told to meet negative emotion with positive emotion, and unholy passion with holy passion.

On a deeper level, Torah study functions as a positive channeling of the passionate desires once focused on sin, now refocused and directed on a passion for God and His Torah. We have, then, not only an immediate counterbalance to instant gratification, but also the satisfaction of fulfilling one’s fiery passions! Afikei Mayim Shavuot explains (p.228) that this is the deeper meaning behind Maimonides’ oft-quoted dictum: “A person should always turn himself and his thoughts to the words of the Torah and expand his knowledge in wisdom, for the thoughts of forbidden relations grow strong solely in a heart which is empty of wisdom.”

As we’ve seen, there is a place for mindful meditation as spiritually preventive medicine, and a place for prompt reaction in the form of Torah study as spiritually curative medicine. Both strategies are needed for any long-term success in the spiritual life, and both beautifully parallel the modern findings of behavioral economics.

Can The Torah Help Us Overcome The Temptation Of Instant Gratification?