The Real Life Rabbi Who Almost Played One On The Marvelous Mrs. Maisel — Until They Asked Him To Shave His Beard 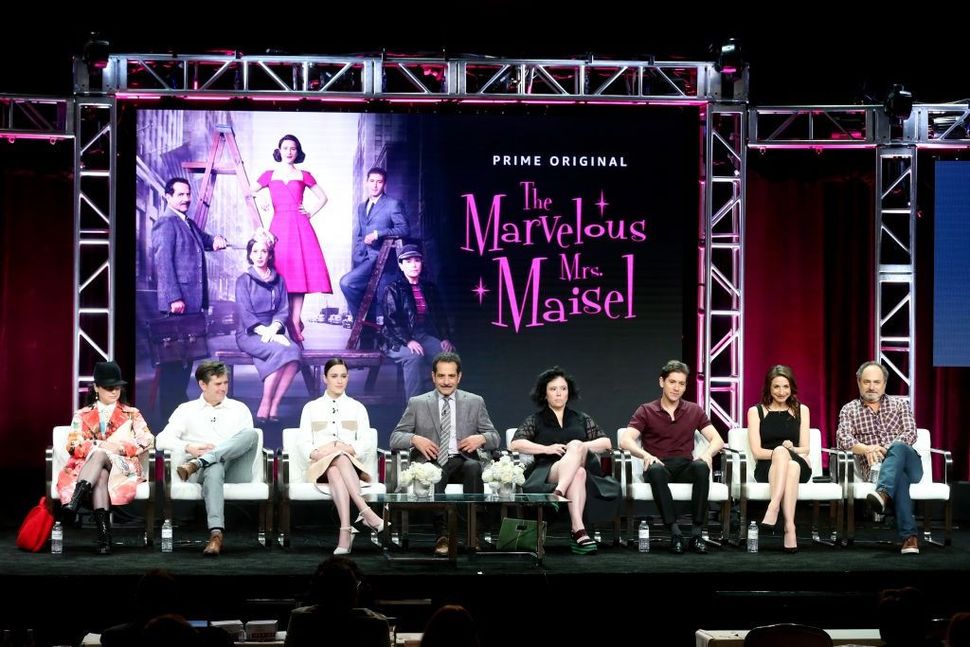 Amazon’s Golden Globe-winning — and now Emmy-nominated — comedy The Marvelous Mrs. Maisel is coming back for a second season, and I couldn’t be happier. As a rabbi and pop culture vulture, you can imagine my delight when I was tapped to play “the rabbi” on the show. But alas, in a real life plot twist that would make Mrs. Maisel herself kvell, my shot at playing “the rabbi” was not beshert (meant to be).

For those unfamiliar with the marvels of Ms. Maisel, it centers on the 1958 story of : Miriam “Midge” Maisel, a Jewish woman who has it all — a sharp suited, Mad Men-type husband, two kids and an elegant apartment on New York’s Upper West Side that’s bigger than my Brooklyn storefront synagogue.

However, her world comes crashing down when Mr. Maisel, a wannabe beatnik beneath his grey flannel suit, bombs while doing standup in the trendy Village coffee house, The Gaslight. He blames his lousy performance on Midge, and then comes the “punchline”: he’s leaving her for his dimwitted secretary.

Her upper middle class life shattered, Maisel reinvents herself as, of all things, a comedian. Unlike her husband, Maisel is a natural. Her self-deprecating style falls firmly within the tradition of Jewish American humor — winning over even Lenny Bruce himself.

I had my own brush with potential stardom when I was offered a bit part as a rabbi on the show for the second season. The first sign it was not meant to be was that the casting agency asked me to shave off my beard the night before my costume fitting. I politely explained that, unlike those of my Brooklyn hipster peers, my beard isn’t a trendy fashion statement, let alone part of a “costume” — it’s kind of a religious (and job) requirement.

When I realized that a Friday afternoon shoot meant I might not make it back home for the Sabbath, I told them to find someone else. (Not even in showbiz, and already I was becoming a diva…)

I was disappointed about having to discard my own dreams of (small-screen, small role) stardom, but how could I explain to my congregants that their rabbi was unable to lead services that night because he was too busy pretending to be a rabbi (without a beard) on television? That’s a little too “meta” even for Brooklyn.

Yes, it was a letdown, but the experience wasn’t a total loss. The show has taught me a few lessons about dealing with discouragement, and inspired me to pass them along as High Holy Days teachings:

Humor And Stuggle Can Heal

Saul Bellow once observed that “Oppressed people tend to be witty.” In that spirit, Midge uses comedy as a coping mechanism after her marriage falls apart.

For many younger viewers, the pre-feminist world Midge inhabits might as well be ancient history. She’s a rebel, and no matter the time period, there is something very Jewish about grappling with the discrepancies of power, which is, in turn, the essence of satire. Laughing in the face of fear is a powerful statement of defiance.

Ever since the biblical Jacob wrestled with the angel and earned the name Israel for his efforts, battling with earthly (and even heavenly) powers has been at the core of Jewish identity. Unlike the sacred books of many other religions, the Talmud, the oral tradition from which Jewish rabbinic law is derived, is more like an anthology of arguments than a handbook of answers. The Talmudic sages fearlessly but reverently dissected every aspect of Jewish law, belief, philosophy and tradition, and they still have a great deal to teach us.

Practice Makes It Worth It

Despite her auspicious debut, Midge does not always crush it onstage. Dejected, she temporarily quits the Gaslight. But she doesn’t lose her innate sense of humor, and soon finds herself honing her comedy skills at social gatherings instead. Even when she’s not onstage, Midge is always practicing, almost in spite of herself. This helps her find her way back into the spotlight, where she belongs.

There is a famous story of Rabbi Akiva, one of Jewish history’s greatest sages and mystics, who was walking through the woods one day when he saw a large rock with a hole in the middle. Upon further investigation, Rabbi Akiva discovered that the hole had been made by a tiny drip of water that had bored its way through the solid rock, drop by drop, over many years.

Now imagine what we can accomplish with consistent practice.

At the beginning of the show, we see Midge’s extensive middle-of-the-night beauty regimen. She wants her husband to think she wakes up every morning looking flawless.

The Hebrew word for face, “paneem,” is etymologically related to the one for interior, “pineem.” In other words, the face we present to the world must reflect our insides in order to be truly authentic.

After her husband leaves, Midge is relieved to realize she doesn’t have to secretly put on makeup and do her hair before dawn anymore. She’s able to be herself, “flaws” and all. Her husband had tried and failed to be a comedian by stealing someone else’s persona (in this case, Bob Newhart’s) whereas, by being herself, Midge owns the stage and wins over the cool crowd.

Midge reminds us to be ourselves, and to speak out, even if it’s not “the norm.”

Even before Woody Allen made the line mainstream in his movie Crimes and Misdemeanors, generations of comedians (including Lenny Bruce) have said that “comedy is tragedy plus time.” Life doesn’t always go the way we’d like it to, but when we put our disappointments into perspective, we can find the humor in almost any situation. If, like Midge Maisel, we can get the last laugh, then we win — even when we lose.

That’s a great High Holy Day message if ever I heard one.

The Real Life Rabbi Who Almost Played One On The Marvelous Mrs. Maisel — Until They Asked Him To Shave His Beard