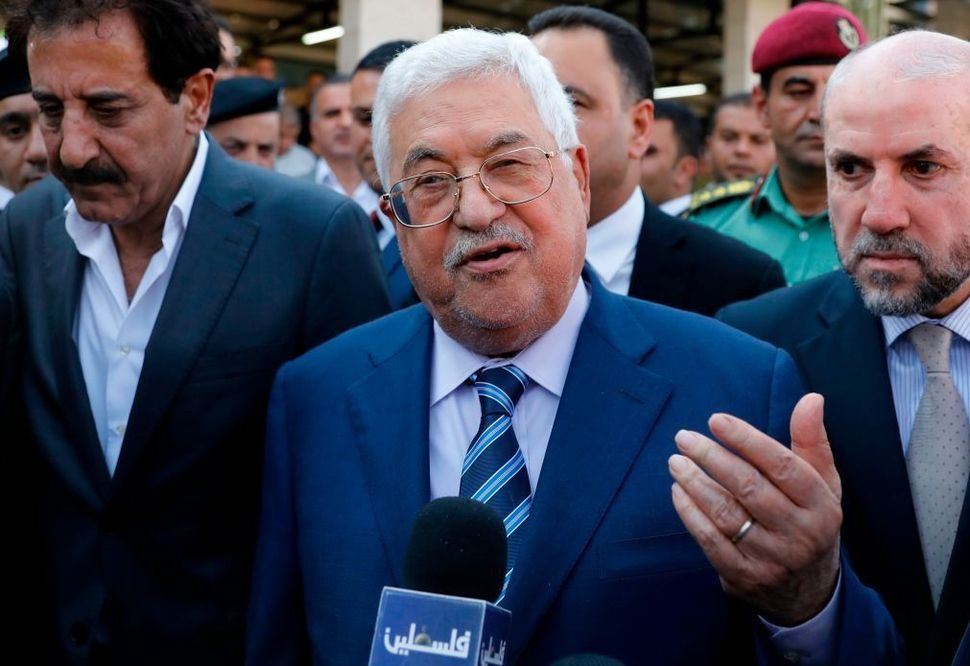 Palestinian President Mahmoud Abbas (C) talks to the media during his visit to the Pilgrims City, in the West Bank town of Jericho on August 6, 2018. Image by Getty Images

At a recent campaign-style rally, President Donald Trump said that Israel is going to have to pay a “higher price” in future negotiations for his recognition of Jerusalem as Israel’s capital. The Palestinians, he added, “will get something very good, because it’s their turn next. Let’s see what happens.” Whether this was an off-the-cuff remark or preparation before his long-anticipated grand strategy to solve the Israeli-Palestinian conflict, this or a future administration will again be pressuring the parties to accept its version of a two state solution.

To American ears, the meaning of “two states” is unambiguously straightforward. The struggle between Israel and the Palestinians, to them, is a struggle between two indigenous peoples fighting over the same space of land in which they share a history. A fair solution, then, would be one in which Israel is the state of the Jewish people, and alongside it will exist a separate Palestinian State.

But in the Middle East, nothing is easily understood or obviously clear. American negotiators, many American supporters of Israel and Israelis themselves use the term “two states” believing its definition is self-explanatory and accepted by all parties — but this is far from the case.

To Palestinians on both sides of the green line, “two states” is a capitulation that would leave one small state, Palestine, for indigenous people, and one state, Israel, would be given to the oppressive foreign colonialists.

Shlomo Avineri, a well-respected Professor Emeritus of Political Science at the Hebrew University, outlined this view in a 2015 column for Haaretz:

Of course, the natural conclusion of this view is that the American conception of “two states for two peoples” is not a fair or an acceptable solution. From my extensive experience speaking with Palestinian leaders and laymen alike, I have come to learn that the Palestinian version of the two state solution leaves no room for a Jewish state.

This year, I lead an in-depth seminar in Israel trying to understand what Palestinian citizens of Israel want in the 21st century.

To almost all Palestinian citizens of Israel I spoke with, from Arab mayors to teachers, a state of the Jewish people is illegitimate in their eyes; Zionism is a colonizing enterprise of Jews stealing Arab land. Judaism, to them, is exclusively a religion, without a legitimate civilizational or national aspirational component. They view the Jewish historical claim to the land as fictional and Zionism as racism.

Their idea of a fair “two state solution” is one completely Arab state in the West Bank and one democratic binational State of Israel that allows the right of return for descendants of Palestinian refugees. It is a “two state solution,” but not the one American Jews would recognize or Israel could survive.

I asked these Palestinian citizens of Israel if, were they to have every economic advantage Jewish Israelis have, even without performing any compulsory civil service, would they then consider Israel a legitimate democracy. Almost all said no: not until the Jewish star is removed from the flag, Hatikvah is no longer the national anthem and the right of return for Diaspora Jews to Israel is rescinded.

In 2011, Fatah Foreign Relations Chief Nabil Shaath was very clear: . He said, “the story of ‘two-states for two peoples’ means that there will be a Jewish people over there and a Palestinian people here. We will never accept this… we will never agree to a clause preventing the Palestinian refugees from returning to their country.”

Today in American politics, some candidates have abandoned any façade of a fair two state solution. The first Muslim American Congresswomen from Michigan, Rashida Tlaib, told Britain’s Channel 4 that she would “absolutely” vote against U.S. military aid to Israel, and declared that she believes in the ”one state” solution, i.e. the demographic destruction of Israel.

There is little doubt that future American administrations will re-attempt negotiations with the Israelis and Palestinians in hopes of achieving some form of a two-state solution. But it would be wise, before proceeding, to have both parties sign an agreement that at the end of the negotiations, one of those states must be the State of the Jewish people, with the final resolution including a signed end-of-conflict agreement that unambiguously states that 100% of all Palestinian claims to that state are settled.

The security of Israel, and the future of a Jewish state in the Middle East, depends on it.