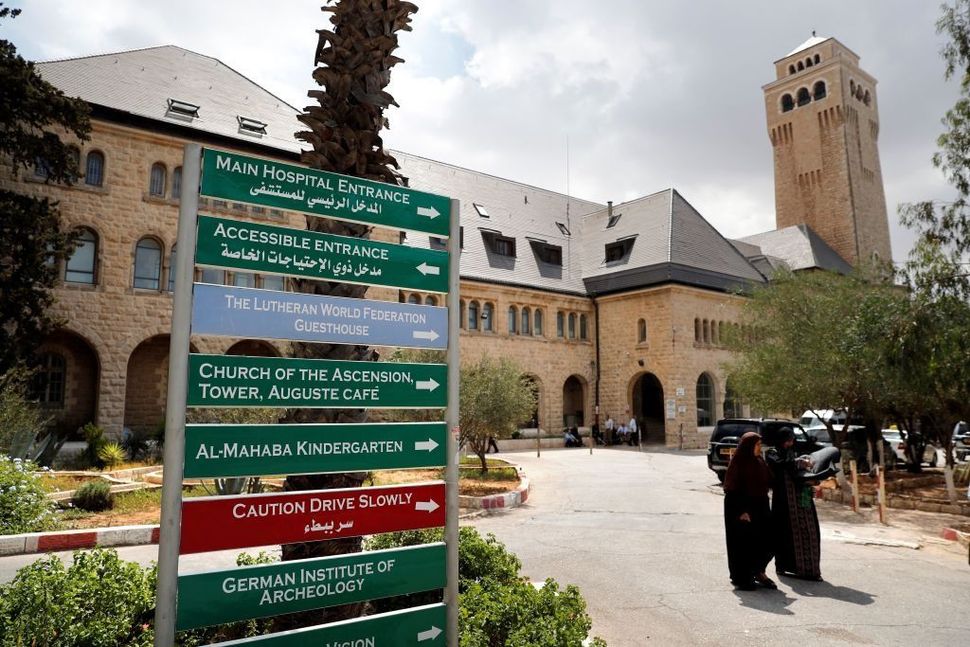 The United States plans to cut $25 million in aid to six hospitals primarily serving Palestinians in Jerusalem, a State Department official confirmed on September 8. The official said the decision followed a President Donald Trump-directed review of assistance to the Palestinian Authority and in the West Bank and Gaza ‘to ensure these funds were being spent in accordance with US national interests and were providing value to the US taxpayer.’ Image by Getty Images

A version of this article originally appeared in Plus61J, an Australian Jewish publication.

While receiving her dialysis treatment at East Jerusalem’s Augusta Victoria hospital last week, nine-year-old Amani Hababa broke into laughter. Two rednosed therapeutic clowns were singling her out for special attention, babbling nonsense verses, playing guitar and singing “Amani is the sweetest.” Six other small children from the West Bank and Gaza Strip receiving dialysis were also being regaled alongside her.

“They are great,” said Amani’s mother, Ibtisam. “They are making the kids forget their illness so they won’t be so sad.”

Despite the efforts to keep the chiidren’s spirits up, these days their parents and staffers at the facility are deeply worried. They fear that US President Donald Trump’s decision announced on September 8 to terminate US$25 million in American assistance to Augusta Victoria and five other East Jerusalem hospitals will impact directly on the children’s care.

“This decision is wrong. Where will the help for the children come from?” asked Ibtisam Hababa, noting that Ramallah hospitals are not an option since they do not offer dialysis for small children. “I’m worried for my daughter. She needs to get better, she needs her treatment.”

Trump advisor and son-in-law Jared Kushner is depicting the cuts as being aimed at the Palestinian leadership, which refuses to accept the US as a mediator in peace talks. He said in an interview with the New York Times last week that Palestinian leaders deserved to lose the aid after vilifying the administration over its recognition of Jerusalem as Israel’s capital.

In Augusta Victoria, however, it becomes apparent that Trump and Kushner are actually hitting the most vulnerable individuals imaginable: those already grappling with life-threatening disease.

The hospital treats 800 inpatients and outpatients daily, providing advanced treatments which the more rudimentary facilities of the Gaza Strip and West Bank are unable to offer. Louai Abu Haniya, 16, from Jiflik village north of Jericho in the occupied West Bank’s Jordan Valley, stays in the hospital for three days every two weeks to receive chemotherapy.

He looks deceptively healthy and smiles at a visitor but his condition is grim: he has colon cancer that has spread to his liver. “He’s had 12 cycles of chemotherapy and he will continue. He will definitely need more,” said his nurse, Khitam Alawi, from Bethlehem.

Alawi, 36, says hospital staffers are worried about Trump’s cut: “We feel sorrow for the patients and what might happen to them. We need to treat patients like Louai. We need him to stay alive.”

Basma Khoury, 58, a former United Nations Development Program project manager, from Ramallah, who is being treated for breast cancer that spread to her spinal cord, has been jarred by Trump’s move. “Of course I’m afraid I’ll be affected. It’s very unfair from a human view. The US is trying to press the PA but the cancer patients are not responsible for politics.”

Khoury, who has been battling cancer since 1997, was forced to stop her job three years ago because “I reached the point I couldn’t stand on my legs. I was in extreme pain. Taking pain medication made me drowsy and so I wasn’t all there. It wasn’t fair to my employer to stay in my job.” Khoury has been forced since then to rely on support from relatives.

With her treatment unavailable elsewhere in the West Bank, the Augusta Victoria hospital is her only viable care venue. She cannot afford an Israeli hospital and travelling to Jordan is difficult and expensive. “The treatment here is excellent,” she said. “The staff is sometimes overwhelmed when a lot of people from Gaza come in. It can be hectic but they all treat us with a lot of professionalism and caring.”

After Palestinian President Mahmoud Abbas decided on a boycott of US officials in response to the administration’s decision to recognise Jerusalem as Israel’s capital, Trump ordered a review of US aid to the Palestinians. In recent weeks, the US withdrew US$200 million in assistance to the Palestinian Authority and cut all US funding for the UN agency responsible for Palestinian refugees, the United Nations Relief and Works Agency (UNRWA).

Even before the cut, Augusta Victoria and the other East Jerusalem hospitals were already in dire straits. “The effect is detrimental at all hospitals, ” said Walid Nammour, CEO of Augusta Victoria and secretary of the East Jerusalem Hospitals Network. “In our case, the cost of medications is very high. We have reached the upper capacity for the credit line so we really need cash to move forward and pay our suppliers. We need to pay for water whose debt has been piling up in skyrocketing figures. This puts so much more stress on our budget. Our condition was chronic and Trump’s move adds insult to injury.”

The Palestinian Authority has pledged to step in and make up the US$25 million cut by the US. “Hopefully the short term will be managed by additional funding from the national budget,” said Nammour. “At this stage the question mark is more over the long term.”

The prognosis for the hospitals is bleak, according to Physicians for Human Rights-Israel, an Israeli NGO that assists Palestinians with health care. It notes that the PA already owes the hospitals vast sums of money. “Hospitals in East Jerusalem have been in financial distress for some time and closing the tap could lead to their complete collapse while withholding the right to health from tens of thousands of patients,” it said in a statement.

Yousef Hamamreh, director of Augusta Victoria’s Cancer Care Unit, said it is essential to maintain continuity of care. “We are not dealing with patients with simple problems, we are dealing with cancer patients who need to be treated continuously in accordance with international protocols and international treatment standards. “As a physician and director of the cancer care centre, I say ‘please try to keep our patients away from political issues’,” he added. “We shouldn’t harm cancer patients. We need to harm cancer itself, not the patients.”